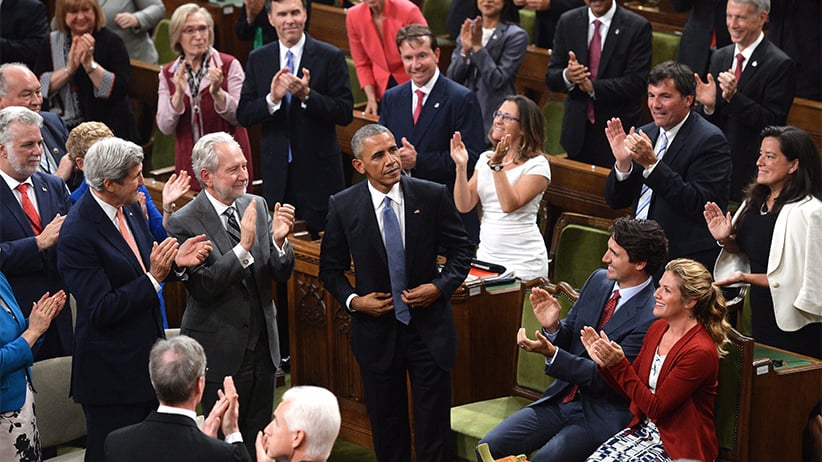 U.S. President Barack Obama, centre, is greeted by a standing ovation in the House of Commons in Ottawa on Wednesday, June 29, 2016. Adrian Wyld/CP

OTTAWA – U.S. President Barack Obama brought the House down Wednesday as he passed a diplomatic torch of sorts to Canadian counterpart Justin Trudeau, along with a pointed warning about the perils of injustice and inequality.

In what was almost certainly his last visit to Canada as president, Obama held court for nearly an hour before a joint session of the House of Commons and the Senate, basking in cascades of applause and heaping praise on the country’s young new prime minister, with whom he’s become fast friends.

Trudeau, said Obama, has brought new energy and leadership to Canada and to the everlasting alliance between the two countries. The world will continue to benefit from Trudeau’s time in office, he said, even as his own era comes to an end.

But even as he lauded his host country for championing values like integrity, human rights and fair play, he urged it to pay its full share to NATO — a solitary note of discord in a speech focused on Canada-U.S. harmony.

“As your ally and as your friend, let me say that we’ll be more secure when every NATO member, including Canada, contributes its full share to our common security,” Obama said.

Canada has committed to meeting a standard target of spending two per cent of its GDP on defence, but has been lagging well below that mark for several years.

That direct request sets the stage for the next time Trudeau and Obama are likely to cross paths — next month’s NATO summit in Poland.

And just as he did during a news conference with Trudeau and Mexican President Enrique Pena Nieto earlier in the day, Obama also warned against the perils of protectionism and xenophobia, which he hinted are closer than some might think.

“If our democracies seem incapable of assuring broad- based growth and opportunity for everyone, then people will push back out of anger or out of fear,” he said.

“And politicians — some sincere and some entirely cynical — will tap that anger and fear, hearkening back to bygone days of order and predictability and national glory, arguing that we must rebuild walls and disengage from a chaotic world, or rid ourselves of the supposed ills brought on by immigrants, all in order to regain control of our lives.”

Trudeau introduced Obama with words of praise and a nod to the president’s final months in office.

“History books will record signature policies, (but) what I will remember — what I hope we all will remember — are the lessons you taught us not by executive order, but by example.”

Obama’s speech was full of the requisite jokes about hockey, Canadian celebrities taking over Hollywood, Canada’s weather and the perils of high office — his hair has turned so grey, he said, his wife calls it the “Great White North.”

“Justin is just getting started.”

Both countries, he said, must do more to live up to the ideals they offer and fight back when responses to legitimate fears result in some people being turned into scapegoats.

Obama was greeted by a sustained standing ovation and cheers as he entered the House of Commons, shaking hands with cabinet ministers as he took his seat. The ovations continued to thunder around him throughout his speech, extending it to nearly an hour.

While on the floor of the House of Commons was jammed with MPs, senators and their staff, the galleries above were equally packed with a roster of Canadian celebrates, business leaders and other dignitaries.

Obama’s remarks bookend his relationship with Canada in general and Ottawa in particular — it was the scene of his first presidential visit outside the U.S. in 2009, not long after he was elected the previous year.

Wednesday’s speech was also the first in the House of Commons by a U.S. president since Bill Clinton in 1995.