U2 frontman held meetings in Ottawa on Monday with Stephen Harper, as well as the prime minister's Liberal and NDP rivals. 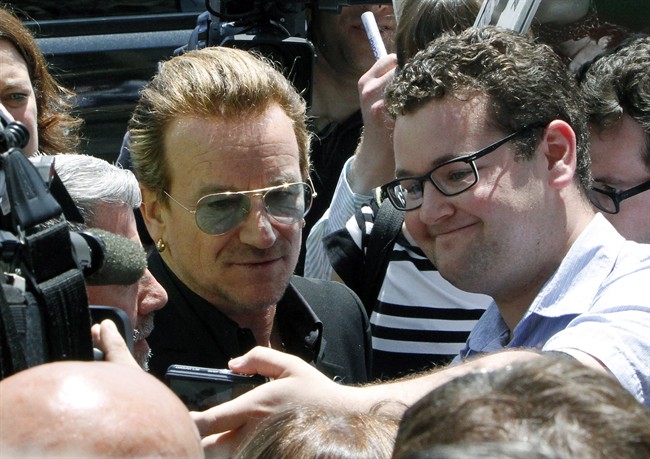 OTTAWA – U2 frontman Bono held meetings in Ottawa on Monday with Stephen Harper, as well as the prime minister’s Liberal and NDP rivals.

The Irish rock singer sparked another round in the political debate over the Conservative government’s development policy, which has focused on maternal and child health, while freezing overall development spending.

Bono remained above the fray, striking an upbeat note as he arrived on Parliament Hill repeating his mantra of “the world needs more Canada.”

“Development assistance, or foreign aid as you call it here, is a really good way of showing who you are to the rest of the world,” Bono said, surrounded by fans and well-wishers.

Fresh off a show in Montreal, Bono arrived earlier in the day at the National Arts Centre in the city’s downtown to discuss foreign aid with several non-governmental organizations.

“Today’s discussions underscore that we cannot work alone — success and innovation happen when we’re all at the table, committed to improving the lives of children.”

Ottawa Mayor Jim Watson, who greeted the singer upon his arrival, said Bono’s star power will help to focus political attention on some overlooked issues.

Bono was to meet with Harper to talk about maternal and child health aid projects in Africa and elsewhere.

Harper has committed $3.5 billion toward the maternal and child health cause, his signature foreign-aid initiative aimed at reducing the number of deaths of newborns and their mothers in the developing world.

But the NDP was critical of Canada’s overall aid spending, which has fallen to 0.24 per cent of GDP, well below 0.7 target set by the United Nations.

The Harper government froze aid spending five years ago, and the most recent budget did not reverse that trend.

The United Kingdom has committed to reaching the 0.7 per cent target, despite having a less robust economy than Canada’s, said NDP development critic Helene Laverdiere.

She also said the government has also lapsed hundreds of millions of aid spending that could have gone towards worthy aid programming.

“Those are cuts through the back door,” she said.

Bono last met with former prime minister Paul Martin more than a decade ago, when the two discussed foreign aid priorities of that time, which included efforts to combat the spread of HIV-AIDS in Africa.