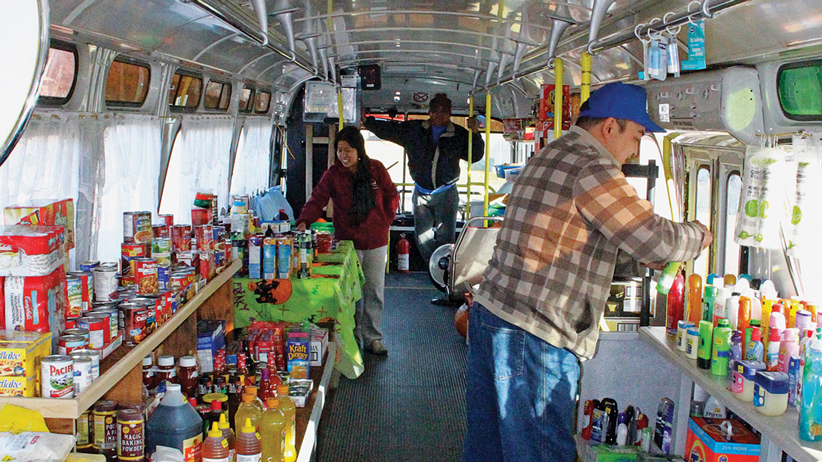 Like a lot of northerners, Mike Sharpe was fed up with sky-high food prices. Unlike most, he leveraged that frustration, channelling his anger into a unique business opportunity. This fall, Sharpe converted an old Edmonton city bus into Cash ’n’ Carry, the Northwest Territories’ first mobile grocery store. “I’ve seen these prices get to the point of being outrageous,” says the 41-year-old Inuvik native. “We can do better.”

And he is. Sharpe, who, for the past five years, drove giant haul trucks for Syncrude in Fort McMurray, Alta., bought the bus for $4,500 with his wife, Joyce Paes. They tore out its seats, installing shelving to allow room for six customers. Then they drove to Edmonton and stocked it with everything from meat to canned goods, from Costco, Wal-Mart and Real Canadian Superstore—wherever they could find the best deals. Every day since, the pair have hit the road, a route that takes them across southern N.W.T., from Fort Simpson to Fort Smith. Sharpe claims his customers will save an average of 30 per cent on their grocery bills.

For Sharpe, navigating the grocery aisles in Hay River, where he and Paes settled in the spring, is an exercise in sticker shock: Two rib-eye steaks cost $26. Heads of cabbage can run $28. A 24-pack of water—in northern communities that don’t have access to safe drinking water—costs $65. “I get upset. I can drive to Edmonton and buy that water for $4.99,” he says. “You’re telling me it costs $61 to ship it 12 hours north? I don’t think so.”

It’s no surprise, Sharpe says, that one-third of children are going to bed hungry in the Northwest Territories, where feeding a family of four is estimated to cost $19,760 a year. The farther you get from Yellowknife, where incomes average $63,000, the worse the problem gets. In remote hamlets like Tuktoyaktuk, incomes drop to $35,000, and to $26,000 in Ulukhaktok. That far from the capital, food prices soar, meaning the territory’s poorest residents are paying its highest food prices.

Ottawa used to help by subsidizing shipping costs, but, in 2011, the Harper government switched to a more market-driven system, giving the subsidy to retailers instead. Under the Nutrition North Canada program, stores are expected to pass on savings by cutting food costs.

But northern food prices appear to have only increased since, says MLA Norman Yakeleya, who represents Sahtu, in the N.W.T.’s central-north. Politicians aren’t just alarmed by soaring food costs: “It appears retailers are making a tidy sum,” says MLA Fred Schell, who represents Nunavut’s South Baffin region. “We just don’t see evidence the subsidy is being passed on,” says Leesee Papatsie, a Nunavummiut mother of five who launched grassroots protests against the territory’s crushing food prices last year. Since then, more than 20,000 people, roughly two-thirds of Nunavut’s population, have joined her Facebook protest site, Feed My Family.

Concern with the new federal program led the three territories to demand a federal audit of Nutrition North. Results of Michael Ferguson’s audit are due later this fall.

For Sharpe, business, driven by fierce anger over price-gouging, will remain strong, no matter what comes of the audit. Priscilla Lafferty, a Fort Resolution mother of three, says local residents are willing to wait two weeks, until Mike comes to town, to buy their groceries. Sharpe’s prices are roughly half what Lafferty says she’s used to paying. At the town’s northern store, she says, diapers run her $70 for a package of 28. Sharpe charges $23.

Sharpe is committed to equal pricing. No matter how remote the community, prices will remain flat. His goal is to expand by “growing customers, not by growing prices.” This was the philosophy behind the Inuvik car wash he launched at age nine. He ran it every summer until he turned 19. Over 10 years, he charged $5 per car, not once increasing fees. Instead, he found ways to increase productivity and his customer base by extending his business to taxis and tour buses, and purchasing a pressure washer that allowed him to stay open in sub-zero temperatures, lengthening his season by six weeks.

His wife is also a born entrepreneur. Growing up in the Philippines, Paes used to sell crackers and candies to her schoolmates every morning, earning enough to buy herself lunch and dinner.

“There’s no model to follow,” Sharpe says, chuckling. “I’m the model. No one else is doing this.” So he’s learning as he goes. Northerners, it turns out, prefer Nabob over Tim Hortons coffee. They like Tenderflake, not no-name lard. They’ll only buy Robin Hood flour. And, he adds, you can never stock enough toilet paper.