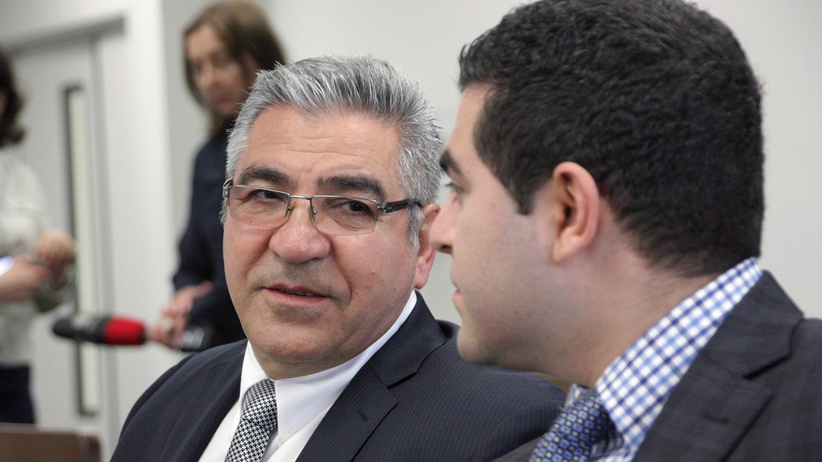 The Ontario real estate investor who owned Elliot Lake’s doomed shopping mall remains the target of a criminal investigation as authorities continue to negotiate access to hundreds of pages of potential evidence—first seized in the days after the deadly collapse, but under seal ever since.

As Maclean’s revealed last week, three search warrants executed by the Ontario Provincial Police (OPP) identify Asadoor “Bob” Nazarian as a prime suspect in the ongoing criminal probe of the Algo Centre cave-in, which killed two women and injured numerous others in June 2012. According to the warrants, Nazarian is being investigated for potential criminal negligence causing death for failing “to maintain the structural integrity” of the mall and failing to “take sufficient steps to remedy known deficiencies” in the building’s notoriously leaky rooftop parking lot. (The 69-year-old has not been charged, and may never be. Contacted by Maclean’s, he declined to comment.)

To date, police have interviewed at least 800 witnesses and collected enough evidence to fill a 10-terabyte hard drive. But more than two years after the collapse—and charges laid against only one person, a former engineer—the case against Nazarian appears to hinge on more than 700 documents that remain off-limits to police because his Elliot Lake lawyer, Antoine-René Fabris, claimed solicitor-client privilege.

Related post: One step from death — a feature-length report on Elliot Lake mall on the day it came down

Anxious to read those sealed records, the Ontario Attorney-General’s office launched a court application in July, asking a judge “review the seized documents in order to resolve and rule upon the issue” of whether they are indeed privileged. (Not all correspondence between a lawyer and client is automatically covered by privilege; only those records that specifically discuss legal advice, litigation or settlements are confidential.) A hearing on the application was scheduled for today in Sault Ste. Marie, 200 km from Elliot Lake, but was adjourned to give both sides more time to reach an agreement that won’t require the court’s intervention. “The parties have been negotiating and they are very close to a resolution of this matter,” said Assistant Crown Attorney Kelly Weeks, appearing before Justice Ian McMillan. “So at the request of Crown and defence, the matter should go to Wednesday Nov. 12 to be spoken to.”

The hearing lasted less than two minutes. Neither Nazarian nor Fabris was there.

On Oct. 15, the Elliot Lake Public Inquiry issued its long-awaited report, a sweeping, damning indictment that implicated a long list of characters, from shoddy inspectors to bumbling city officials to successive owners who knew the roof was a potential structural risk but refused to pay for repairs. As Commissioner Paul Bélanger concluded: “The real story behind the collapse is one of human, not material, failures.” Few escaped his scorn.

But while many locals welcomed the inquiry’s 1,400-page report—confirmation, finally, that municipal officials protected the crumbling mall at all costs, leaks be damned, because the building was so vital to the Elliot Lake’s “Retirement Living” recruitment strategy—Bélanger’s scathing remarks triggered the obvious question: If so many were “greedy,” “negligent” and “incompetent,” why haven’t police laid more criminal charges?

The commission’s mandate was to discover the truth about what happened, why it happened, and issue recommendations aimed at preventing similar tragedies; it is the OPP’s responsibility, independent of the inquiry, to gather evidence for potential prosecutions. But while police won’t discuss the scope of their active investigation, the search-warrant records obtained by Maclean’s offer the most detail yet—including why it appears only two people, Nazarian included, have been fingered as potential suspects.

Police seized thousands of documents from dozens of locations in the weeks after the tragedy, including files from City Hall, Retirement Living, Algoma Central Corporation (the company that built the mall), and numerous engineering firms, including the now-defunct M.R. Wright and Associates, based in Sault Ste. Marie and owned by longtime structural consultant Robert G.H. Wood. Investigators also raided Nazarian’s home in Richmond Hill, Ont., his son’s real-estate brokerage, and the hotel office attached to the Algo Centre, specifically looking for correspondence, invoices and digital storage devices. “I reasonably believe that an examination and analysis of these devices will afford evidence in relation” to the offence of criminal negligence causing death, wrote Det.-Cst. James Hambleton, another member of the investigative team.

Related post: Did one victim die while awaiting rescue?

But as police carried out their raids of the Nazarian properties, Fabris, via telephone, told the officers he planned to claim privilege over any document that contained his letterhead. All records that appeared “legal in nature” were therefore packaged separately and closed with “forensic seals.” A representative of Fabris’s law firm later visited the OPP evidence locker in Elliot Lake, examined each document, and claimed privilege on 738 pages. To this day, police are still prohibited from reading them.

By the summer of 2013—more than a year after the lifeless bodies of Doloris Perizzolo and Lucie Aylwin were removed from the rubble—police had focused their probe. “The magnitude of the investigation has proven to be extremely large and complicated,” reads a sworn affidavit signed by Det.-Const. Allan Gelinas in August 2013. “To date, investigators have identified two suspects in the Algo Centre Mall investigation, Bob Nazarian (the owner of the mall) and Bob Wood (the engineer who conducted the most recent inspection of the mall).”

Wood was arrested five months later, in January 2014, and released pending trial. A once-respected engineer with nearly 40 years of experience, he inspected the mall just ten weeks before the roof gave way and concluded that the steel beams supporting the rotting parking deck were “structurally sound.” (In his inquiry report, Comm. Bélanger compared Wood’s review “to that of a mechanic inspecting a car with a cracked engine block who pronounces the vehicle sound because of its good paint job.”) Wood also agreed to alter his final report, at Nazarian’s request, to remove a photo of a severely rusted beam and a reference to “ongoing” leakage. He faces two counts of criminal negligence causing death and one count of criminal negligence causing bodily harm.

Building a possible criminal case against Nazarian, however, has proven far more complicated because of the privilege issue—which was also a point of contention during the public inquiry. The Nazarian family (Bob, his son Levon, and his wife Irene) all refused to turn over tens of thousands of emails, forcing the commission to launch a court application demanding access. Although the Nazarians eventually relented and handed over most of the records, they continued to claim privilege on 289 specific documents: 144 on the grounds that they disclosed legal advice; and 145 because they discussed litigation or settlements.

In the end, Justice Stephen Goudge of the Ontario Court of Appeal ruled that only a small minority of the records are privileged, and ordered the rest handed over to the inquiry. Fabris also complied with a summons, disclosing another batch documents to the commission. But for police immersed in their own investigation, confusion reigned: prohibited from looking at the sealed documents in their possession, the OPP has no idea if they are the same ones disclosed to the inquiry, or if they even hold any evidentiary value.

“No inventory of the said documents was generated prior to the documents being sealed and stored for fear that such a process would raise allegations of a breach of the claimed privilege,” says another affidavit written by Detective-Constable Yvan Perron, the file co-ordinator for the Elliot Lake criminal investigation. “As a result, I am unable to describe with any degree of detail the nature, purpose, or scope of the documents for which a resolution of privilege is being sought. I am further unable to advise whether any claim of privilege has been subsequently abandoned or ruled upon in relation to any of the sealed documents as part of the Elliot Lake Commission of Inquiry.”

In other words, police are at a standstill.

Although the issue may finally be resolved by the time both sides appear back in court Nov. 12, it could be many more weeks, if not months, before authorities decide whether there is enough evidence to warrant charges against Nazarian. And whatever the outcome, the bigger question will remain: Why just Wood and Nazarian?

“The investigation should be more wide-ranging than that—I hope it’s more wide-ranging than that,” says Douglas Elliott, one of a team of lawyers who represented mall merchants and injured shoppers during the inquiry. “But of course, they have to decide whether they’ve got enough facts to warrant prosecution. Bad behaviour, even moral behaviour, is different than criminal behaviour.”

Roger Oatley, a lawyer who represents the families of the two women who died, said he also hopes police thoroughly investigate all potential criminal behaviour, especially in light of Bélanger’s damning conclusions. “Any criminal responsibility, as far as the families are concerned, should be borne more widely by a number of people who could have prevented this tragedy,” Oatley says. “They are certainly pleased that charges have been laid against the engineer; they will be equally pleased if there are charges against Mr. Nazarian. But the families’ position is that the most responsible party is the city of Elliot Lake. It is incomprehensible that the city did virtually nothing to protect people using that building.”