The U.S. Navy’s newest warship is stuck in the ice in Montreal

The $440 million USS Little Rock may be “sleek, agile and deadly”—but it’ll have to wait for the spring thaw to prove it 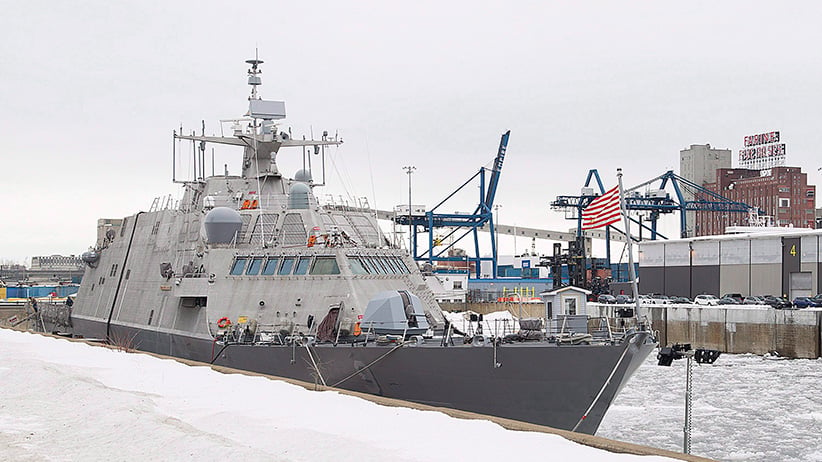 The USS Little Rock moored in Montreal’s old port, Sunday, January 21, 2018. The newly commissioned warship will be wintering in Montreal after its journey to Florida was interrupted by heavier-than-usual ice flows in the St. Lawrence. (Graham Hughes/CP)

Moored in Montreal’s portlands, USS Little Rock—the latest warship to join the U.S. navy’s fleet—looks like it’s protecting the city. The port, along with the city’s pubs and eateries, are no strangers to a naval presence: sailors from around the world have been known to roam the historic riverfront during much-needed pit stops. Only this time, it’s the ship seeking refuge. Icier-than-usual conditions along the St. Lawrence Seaway have kept the 118-metre vessel tied up until conditions improve—possibly for the remainder of winter.

Its journey started in Buffalo, N.Y., last December, where the littoral combat ship was commissioned in front of more than 8,000 people. Crew members had prepared for the launch for nearly three years, and for some it had been months since they’d seen their families. “Little Rock has everything. She’s sleek; she’s responsive; she’s agile; she’s fast and she’s deadly,” Cmdr. Todd Peters, the ship’s commanding officer, told the crowd. From there, Little Rock’s voyage was straightforward: navigate through the St. Lawrence River, bend around the Maritimes and, at speeds reaching nearly 100 km/h, glide south through the Atlantic for warmer waters and its home in Mayport, Fla.

MORE: The only thing that will fix Canada’s military is public outcry

But those plans were put on ice after a cold snap hit Montreal’s transit area. The conditions posed the risk of the vessel’s propulsion system sucking in ice, disabling it and rendering the vessel what’s known as a “dead ship.” And downriver, some channels become pockets for small, fast-moving icebergs that pose a risk to Little Rock’s thin hull that not even an icebreaker escort could solve. As a result, the 3,084-tonne ship ground to a halt, and since Christmas Eve, has been a permanent fixture in the city. “All options were considered, but out of safety it was determined that the ship should remain in the Port of Montreal,” says Lt.-Cmdr. Courtney Hillson, a spokesperson for the Little Rock.

The 70 crew members live on the ship, Hillson says, and have been biding their time with mission training and certification exercises to “maintain their proficiency in areas such as medical, damage control, navigation and security.” The ship, named after a Second World War precursor, is ready to depart, pending weather improvements—estimated around mid-March, when the ice usually clears for safe passage.

The crew, who identify collectively as “the Warhawgs,” appear to be making the most out of the stopover—even as temperatures have dipped as low as -26 C. Their Facebook page features video of members throwing pots of boiling water overboard and watching as it crystallizes before touching the frozen seaway. The sailors are also able to explore the city in their down time, despite the reputation acquired over the centuries by seamen on shore leave. (A desultory check of Montreal’s famed exotic dance clubs suggests the sailors have thus far been well behaved.)

MORE: We’ve given up on Canada’s military, so let’s abandon it altogether

The Royal Canadian Navy never received a request for assistance from its southern ally, a spokesperson told Maclean’s. But in the spirit of friendship, the Coast Guard gladly stepped in, clearing a pair of desks at its regional headquarters for U.S. officers; offering tips on where to buy food and cooking supplies; and putting the stranded crew in contact with shooting ranges operated by the Canadian Armed Forces so they could maintain their firearm certifications.

Their decision to stay may have been influenced by a helicopter ride the Canadian mariners gave the commander and senior staff to show the challenges and dangers posed by ice dynamics on the St. Lawrence. “They were very surprised—they were not expecting that at all,” says Capt. Stéphane Julien, the Coast Guard’s acting regional fleet director of the central and Arctic region.

The $440-million ship had already sustained minor damage, Julien notes. “They were very forthcoming with us,” he says. “At the same time there’s a security aspect to their vessel—it’s a brand-new, state-of-the-art ship, so they were very discreet on what they had to repair.” Little Rock’s thin hull, he adds, is built for speed, not breaking ice, while the ship lacks searchlights bright enough to maneuver through the frozen river at night. Escorting it with tugboats also posed a risk. “We shared everything we had with them—we didn’t hold back on anything and they appreciated it like you wouldn’t believe,” Julien says.

For now, Little Rock remains docked in a corner of the port, where a dead current keeps it from being hit by moving ice (the port declined to comment on who is paying the costs for the Americans’ stay). Julien says assisting Little Rock and its crew has been easy from the beginning, because “this is what mariners do—we look out for each other.” He likes to imagine the Americans doing the same thing for him and his own staff if they somehow got stuck in Florida. “It would be nice for me,” Julien says wryly, “but I guess it probably won’t happen.”

MORE ABOUT THE MILITARY: