Vancouver election: Could Gregor be a goner?

The race is still incumbent Gregor Robertson’s to lose. But here are 10 reasons the mayor might actually fail 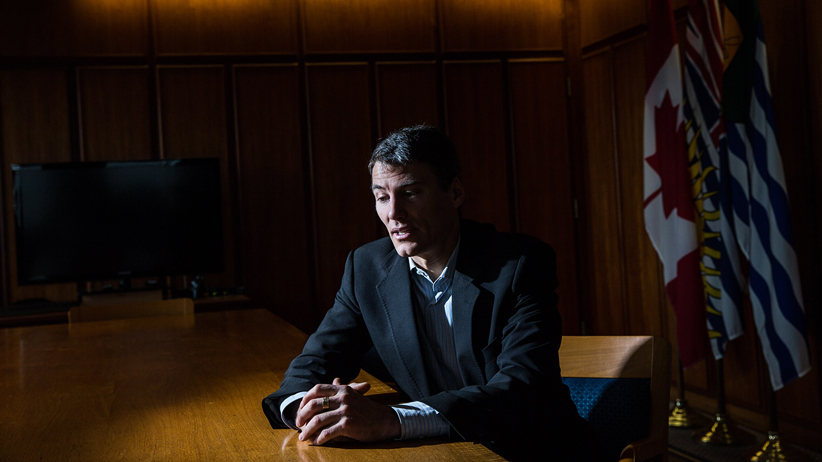 Somehow, in the last 10 days, Vancouver’s election has gone from a boring, done deal to one of the tightest and ugliest civic fights in years. With money, visibility, the incumbent’s edge, plus a volunteer army capable of delivering warm bodies to polling booths on E-Day, Gregor Robertson, Vancouver’s centre-left mayor, should be a shoo-in for a third term. Instead, the 50-year-old juice magnate is fighting for his political life in tomorrow’s election. If polls can be trusted, ex-journalist Kirk LaPointe has narrowed Robertson’s lead to just five per cent. Hard as it is to believe, Gregor, come tomorrow, could be a goner. The race is still Robertson’s to lose. But here are 10 reasons the mayor might actually fail:

For starters, there was the puzzling blanket apology he offered voters in the campaign’s final debate two days ago: “I am sorry,” Robertson told voters, “I can do better.” The Hail Mary move was calculated to humble a mayor widely seen as arrogant. But, just two days before the vote, with polling showing the cratering of support for Robertson and Vision, his political party, the play reeked of desperation. Right, so you finally got the message . . . 48 hours before polls close?

Even Vision supporters acknowledge the party has been remarkably tone-deaf: Their aggressive push for bike lanes and towers has come at laser speed, with little consultation or concern for affected citizens. In a telling off-camera incident, the mayor was once caught complaining about the “f–king hacks” concerned about property values and quality of life, cementing a widely held view of the mayor as imperious and uncaring.

Vision has been seen to toady to the city’s elite. By closing car traffic to Point Grey Road, Vision transformed a waterfront thoroughfare in the city’s toniest enclave to something akin to a gated laneway. The move, of course, caused property values in the surrounding neighbourhood to spike. The city’s affluent West Side has also managed to avoid the towers and homeless shelters thrust into the city’s central neighbourhoods.

Robertson has been haunted by the Vision-led Vancouver School Board’s refusal of a $500,000 donation from Chevron to implement needed math and science programs. It was dirty money from Big Oil, the school board declared—to parents’ outrage. Chevron’s “Fuel Your School” program has been a smashing success in the region’s other school districts, which were all too happy to snap up the money Vancouver left on the table.

Last week, Vision, in a curious move, chose to sue LaPointe for defamation rather than direct funds and attention to a last-minute ad buy. The long-shot suit, filed in the campaign’s final stretch, has instead cast LaPointe as a kind of free-speech martyr. (Robertson and his top political ally, Geoff Meggs, contend LaPointe depicted them as “dishonest,” and painted their attempts to solicit support from organized labour as “corrupt.” LaPointe, who denies the charge, characterizes the suit as an attempt to “silence” him.)

LaPointe, though he stumbled early, has mounted a strong campaign, proving himself particularly deft at the art of retail politics. As a journalist, LaPointe knows the crucial importance of crafting a narrative. His platform may be paper-thin. (Does he support Vancouver’s Green City initiatives? How about densification?) But he’s connecting with voters in a way Robertson never has. In pledging to increase funding for a school breakfast program, for example, LaPointe pointed to his own childhood: He was raised by a single mom, never knew who his father was, was forced to resort to butter-and-sugar sandwiches, and went to school hungry every single day. Compelling stuff, for a run-of-the-mill policy pledge; it earned the underdog another round of flattering headlines.

Two weeks ago, the Georgia Straight, the city’s free weekly, ran a column entertaining the conspiracy theory that Robertson is actually trying to throw the election. It’s the wackiest of theories (Robertson, the thinking goes, is torching his municipal career to run for the Liberals in the next federal election); but the fact that the left-leaning Straight actually deigned to note it says a lot about the strength of Robertson’s campaign.

Although Robertson has repeatedly pledged to make Vancouver “Canada’s most open government,” his administration has become known for muzzling city workers. The mayor’s elected opposition have dubbed city hall a “sealed fortress”; the councillors complain that even they must file freedom-of-information requests to get routine budget information.

COPE, Vision’s rivals on the far left, have defied all expectations and mounted a credible campaign, connecting with voters on issues such as the city’s affordability crisis. Robertson’s pleas for left-leaning electors to vote “strategically” tomorrow appear to be falling on deaf ears: Support for COPE, a Vision splinter party, has hit nine per cent. The party could hive off a significant chunk of progressive votes from the mayor’s party.

Sure, signage may be the most unscientific measure of voter intent; but Vancouver, in the earliest indication of mayoral frustration, was blanketed with a shocking number of LaPointe signs, even in traditionally leftish neighbourhoods such as Mount Pleasant—never a good sign.