'I've heard loud and clear that there are things that we could do better and we will.' 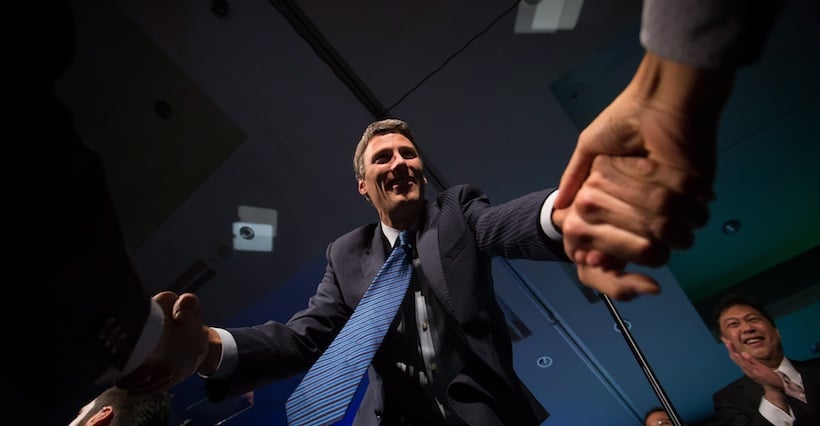 Vancouver Mayor Gregor Robertson greets supporters after being elected for a third term during a civic election in Vancouver, B.C., on Saturday. (The Canadian Press)

VANCOUVER — Vancouver Mayor Gregor Robertson won re-election Saturday, soundly defeating his main opponent despite indications late in the campaign that the mayor’s bid for a third term was in trouble.

Robertson, co-founder of the Happy Planet juice company and a former NDP member of B.C.’s legislature, was first elected in 2008 and will now serve a third term. Outside of Vancouver, he is perhaps best known as the city’s public face during the 2010 Winter Olympics.

The mayor and his Vision Vancouver party entered the campaign as the clear front-runners against Kirk LaPointe of the Non-Partisan Association, a newcomer to politics who was relatively unknown outside his colleagues in the news media.

But polls suggested Robertson’s lead had waned in the final weeks of the campaign, which became increasingly ugly as LaPointe accused the mayor of corruption and Robertson, in turn, filed a defamation lawsuit.

On election night, however, Robertson took the lead in early returns and that gap only widened as the evening progressed. He was elected with 46 per cent of ballots cast, compared with 40 per cent for LaPointe. Robertson’s Vision Vancouver also won a majority on city council.

No single policy issue dominated the campaign, which instead focused on the perception that Robertson ignored the concerns of residents as he expanded bike lanes, added to the city’s supply of social housing and homeless shelters, and green-lit new property developments.

Robertson responded to those complaints during a mayoral debate this past Wednesday, offering a surprising and unprompted apology to voters for falling short of their expectations. He also made a last-minute pitch for strategic voting, urging supports of a left-leaning third-place party, the Coalition of Progressive Electors, to vote for him to keep LaPointe out of office.

The mayor echoed his apology during his victory speech. “I’ve heard from lots of Vancouverites about their strong belief and love for our city, our shared values,” Robertson told a room full of supporters in downtown Vancouver.

“I’ve also heard loud and clear that there are things that we could do better and we will.”

After a campaign that focused in part on discontent with Robertson’s environmental and social policies, he made it clear Saturday night that he planned to continue on the same path.

“There are some very urgent issues we face,” said Robertson, singling out climate change, homelessness and public transit.

“There is a lot more to do and we’re really looking forward to working together as one big team in Vancouver to accomplish these great goals.”

In a concession speech to supporters in a nearby hotel, LaPointe acknowledged the especially heated campaign.

“So the campaign has not always brought out the best in us, but it did deliver a clarity of choice,” said LaPointe.

LaPointe cast Robertson as a left-wing ideologue who repeatedly ignored residents’ concerns, particularly when it came to bike lanes and development. He also criticized the mayor for opposing the proposed expansion of a Kinder Morgan oil pipeline before a federal review is complete, and he accused Vision Vancouver school trustees of putting politics above students when they rejected classroom funding from Chevron.

When a video surfaced during the campaign showing a Vision councillor soliciting donations from a union while pitching the party’s policy of not contracting out city work, LaPointe ran advertising that accused Robertson and his party of corruption.

The ads prompted Robertson to file a defamation lawsuit, though the legal manoeuvre did not appear to affect LaPointe’s messaging.

LaPointe attempted to contrast Robertson’s leadership style by promising to create a city hall that is more transparent and to ensure residents are properly consulted — and their concerns taken into account — on major policies.

For example, when it comes to development and housing, a significant issue in a city where housing costs are the most expensive in Canada, LaPointe promised a renewed city-wide planning process to guide policy and respond to potential concerns. However, that approach allowed him to avoid providing many specifics about just what he would do.

Before entering politics, LaPointe had a long journalism career that saw him work at several major news outlets, including The Canadian Press, where he served as Ottawa bureau chief, and the National Post, where he was executive editor. He was senior vice-president of news at CTV in the early 2000s before becoming managing editor of the Vancouver Sun newspaper.

Most recently, LaPointe served as ombudsman of CBC News and he is also an adjunct journalism professor at the University of British Columbia.