‘Every jukebox that came into Vancouver, I checked out’

Fred Titcomb was born in Moose Jaw, Sask., on April 17, 1912, two days after the sinking of the Titanic. He spent his early years in school, singing in choirs and playing music with his family.

When Fred was 17, he moved west with his family to Swift Current, Sask., and got a job as an apprentice electrician on his first day in town. It didn’t last long—the Depression arrived mere months later. “We all got laid off,” Fred remembers. “It was a rough time for a number of years. I did a lot of things without any pay.” He took on odd jobs and played piano and banjo with orchestra bands, making two dollars a gig.

FROM THE ARCHIVES: Sir James Bisset, writes a first-hand account of the Titanic rescue mission (1959)

Fred and a friend moved to Vancouver in 1933, where he met his soon-to-be-wife, Ada, at his relatives’ bakery. “She and another girl worked for my aunt and uncle in the bakery,” he says. “At first, they thought we were a couple of farmers, but it turned out my chum married one and I married the other. I kind of stole her from my aunt, and it was the finest thing that ever happened to me.”

Working at the bakery led to short-lived jobs in wholesale baking and the kitchen of a local hotel. After another jobless stretch, the Radio Corporation of America took Fred on to work on jukeboxes, which were ubiquitous at the time. “Every jukebox that came into Vancouver, I checked out,” he says. “I got to know just about everything about the Wurlitzer trade.” Soon, he became B.C.’s go-to jukebox aficionado, travelling the province for weeks at a time to repair stereos and swap out old records for new hits, like Les Paul and Mary Ford’s “Vaya con Dios.”

As the jukebox industry cooled down, Fred’s employer went bankrupt. An attempt to run a Shell service station went awry, leaving him and Ada with two young boys and no work. “I had to sit down and wonder what I was really going to do with my life.” The craft-conscious couple started their own hobby shop, which took off, and a local competitor later hired Fred to manage its inventory across the country. He worked until he was 68, spending his time off with his boys in the woods around his West Vancouver home.

Fred also maintained a 75-year-long volunteer career that included a 15-year stint as a volunteer firefighter and a lifetime of service to the West Vancouver Seniors’ Centre. The couple helped the group get its own building, and, when Fred lost Ada to Alzheimer’s 20 years ago, he says, “the centre almost became my living quarters.” He worked there five days a week, building floats for an annual parade, keeping track of the centre’s expenses and managing paperwork—even learning how to use the computer in his 90s. “I did everything,” he jokes. “If anybody wanted anything, it was, ‘Ask Fred.’ It was a joy.” His efforts didn’t go unnoticed; Fred keeps a “brag book” in his office, an overflowing collection of accolades he’s received over the years, including the B.C. Community Achievement Award. 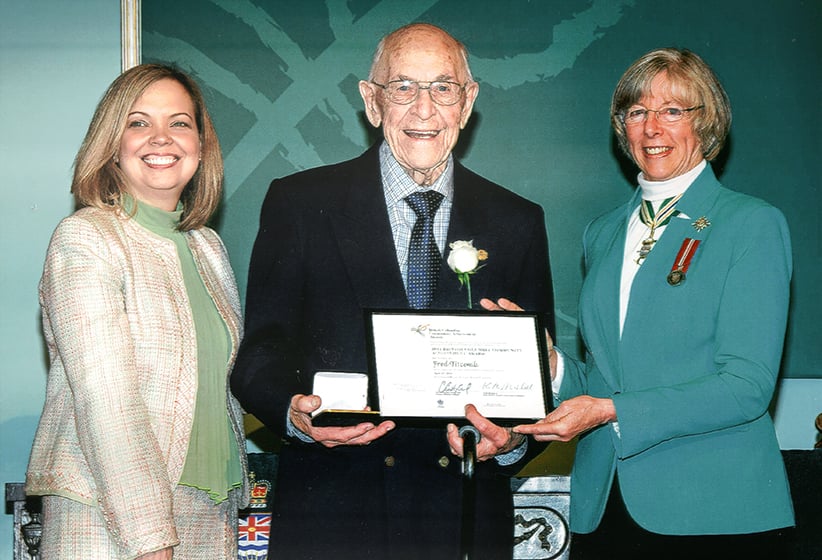 These days, Fred lives at home with his son and continues to work half-days at the seniors’ centre. He still hasn’t seen Titanic, he says with a laugh, which came out when he was 85. “I’ve had a very busy life. I’ve been pretty happy, too. I’ve had my share of problems, with minor surgeries and things like that, but I always seem to come through.” — Luc Rinaldi