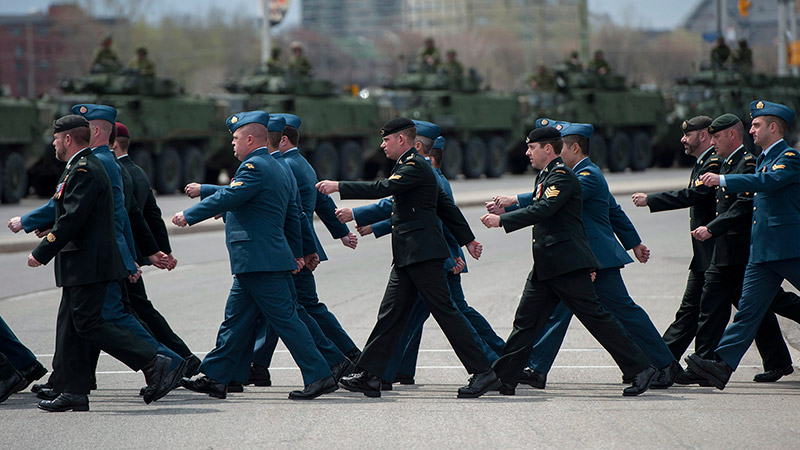 Canadian Forces members, flanked by members in LAV III military armoured vehicles, prepare to parade in the National Day of Honour in Ottawa on Friday, May 9, 2014. (Justin Tang/CP)

OTTAWA — The Harper government has taken to social media to make the case that it’s being generous to disabled veterans, but critics and the opposition say Conservatives are posting misleading information.

A chart laying out different scenarios of compensation was posted on the Veterans Affairs Facebook and Twitter accounts last week, showing benefits ranging from $6,743 per month to $10,260 per month, depending on a soldier’s rank.

The chart compares the “maximum” disability earnings with the pre-release salaries of a private, a sergeant, a captain and a major, and in each case suggests the veterans are coming out ahead.

It also contains a series of caveats — “support varies depending on individual circumstances,” for example — but NDP veterans critic Peter Stoffer says the chart is only being published to deceive the public.

Stoffer said the government is throwing everything, including the kitchen sink, into the calculations knowing full well the vast majority of soldiers never collect benefits that get anywhere near those numbers.

A spokeswoman for Veterans Affairs Minister Julian Fantino said the government is simply responding to the demands of ex-soldiers and the country’s veterans ombudsman for more details about the kind of support that’s out there.

“Veterans have said they want access to clear, easy-to-read information about the range of benefits and supports available to them, like the fact that they are eligible to receive thousands of dollars each month in just financial benefits from the government of Canada,” Ashlee Smith said in an email.

But Stoffer said the government is trying to make a case that it has already fulfilled its obligation to those who have served and that no further improvements are needed to the system.

“It is extremely misleading and they are just trying to pull the wool over the eyes of the Canadian people,” Stoffer said.

“Many, many veterans come nowhere near those amounts.”

Ray McInnis, director of the service bureau at the Royal Canadian Legion, said the figures the government is using are accurate, but only in theory.

The calculation, for example, uses a Grade 2 rating for the permanent impairment allowance, when in fact the vast majority of wounded troops fall under the Grade 3 rating.

“I don’t have a problem with them getting (veterans) to understand what you could be entitled to,” said McInnis. “Hopefully, the person looking at this is not going to look at that top number and just go across the board without reading the fine print.”

Other veterans groups say the information is blatantly misleading, suggesting that it portrays ex-soldiers as greedy in light of a class-action lawsuit that’s currently making its way through the courts.

The challenge, launched by veterans of the Afghan war, argues that the new system of lump sum benefits introduced in 2006 is discriminatory when compared with the pension-for-life regime introduced following the Second World War.

Veterans Affairs Minister Julian Fantino cited the $10,000 per month figure last spring in the House of Commons and during an appearance before the veterans committee.

What Fantino didn’t say was that only four out of 521 severely wounded veterans in the entire country qualify for that maximum entitlement. The eye-popping figure also includes the monthly Canadian Forces pension, a payment that’s made whether a soldier was injured or not.

The figures included in the newly released chart use the same calculation.

Indeed, when Veterans Affairs officials were asked in June to justify the minister’s claim, they would only say the figure represented a “scenario” and that precise calculations, given the cross-section of individual benefits, stipends and supplementary payments, was extremely difficult.

Stoffer said the chart is also misleading because it doesn’t accurately portray the hoops ex-soldiers have to go through in order to qualify for benefits.

Mike Blais, president of Canadian Veterans Advocacy, said he believes the chart is meant to placate Conservative supporters upset by the protests and the lawsuit.

Support for the troops is a core value of the party and the growing unrest has been greeted by dismay among the party’s rank and file.