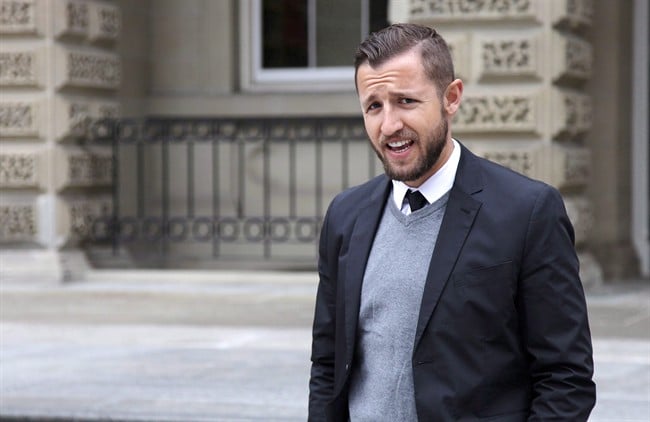 Vice Media journalist Ben Makuch is seen outside the Ontario Court of Appeal on Feb. 6, 2017. THE CANADIAN PRESS/Colin Perkel

TORONTO – A Vice Media reporter must give the RCMP the background materials he used for stories on an accused terrorist, Ontario’s top court affirmed Wednesday.

In a case that pitted freedom of the press against the ability of police and prosecutors to do their work, the Ontario Court of Appeal said it found no errors in an earlier ruling that went against the Canadian media outlet.

However, the Appeal Court said Superior Court Justice lan MacDonnell had been alive to a potential “chilling effect” in this case.

“(MacDonnell) was clearly alive to the concerns about the negative impact of requiring the media to produce material for the police,” the Appeal Court said. “He implicitly addressed that concern as it existed on the facts of this case by identifying factors that tended to significantly reduce the potential ‘chilling effect’.”

Those factors include an absence of a request by Makuch’s source for confidentiality – in fact the source was “anxious to tell the world” about his beliefs and conduct, the Appeal Court said.

Vice expressed disappointment with the Appeal Court decision but said it might try to continue its legal battle by seeking leave to take the case to the Supreme Court of Canada.

“Simply put, this isn’t over,” the media outlet said in a statement.

“Vice Media is prepared to do whatever it takes to support and defend our reporter, and our friend, Ben Makuch. His investigations into the complex world of cyber terrorism and digital security matter more now than ever. Ben’s work and the vital principle of a free press must be protected.”

The materials in question relate to three stories Makuch wrote in 2014 on a Calgary man, Farah Shirdon, charged in absentia of various terrorism-related offences. The articles were largely based on conversations Makuch had with Shirdon via an online instant messaging app called Kik Messenger.

One story cited Shirdon, 22, as saying from Iraq: “Canadians at home shall face the brunt of the retaliation. If you are in this crusader alliance against Islam and Muslims, you shall see your streets filled with blood.”

RCMP want access to Makuch’s screen captures of those chats.

In his ruling a year ago, MacDonnell said the screen shots were important evidence in relation to “very serious allegations” and that there was a strong public interest in the effective investigation and prosecution of such allegations.

Makuch has previously said he had published all information relevant to the public.

The Appeal Court rejected Vice arguments that the prosecution should have to prove the information the RCMP wants was essential to its case.

“No one could accurately assess what the Crown does or does not need to prove its case at trial,” the Appeal Court said.

The court did partly side with Vice on unsealing part of the RCMP’s materials in the force’s demand for Makuch to turn over his information.

Lawyer Justin Safayeni, who represented a coalition of media and journalist organizations, also expressed disappointment in the decision.

“The same concerns that motivated our clients to become involved in this case still exist today,” Safayeni said. “Nothing in this decision reduces the chilling effect of production orders targeting journalists.”