If the body-worn video program is adopted across RCMP, the policy will be finalized and a full version released publicly 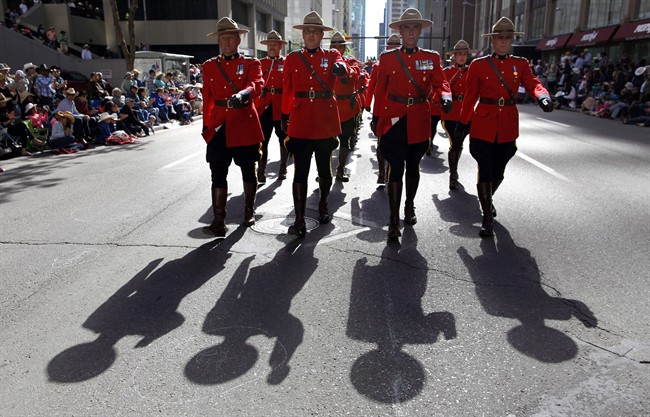 Members of the RCMP march during the Calgary Stampede parade in Calgary, Friday, July 5, 2013. (Jeff McIntosh/CP)

OTTAWA – Mounties wearing tiny video cameras must hit the record button when there is “a high likelihood” they’ll use force against someone, says an interim RCMP policy on use of the devices.

In general, officers have discretion as to when to turn on the cameras that clip on a uniform, or may be embedded in glasses or a helmet.

But RCMP members should not record every public encounter or conversation, according to the interim policy. And when “tactically feasible,” officers are supposed to inform citizens when they are being recorded.

The national police force recently published a summary of the policy, which was provided to a small number of RCMP officers who were involved in a video camera feasibility study last year.

If the body-worn video program is adopted force-wide, the policy will be finalized and a full version released publicly, said Sgt. Harold Pfleiderer, an RCMP spokesman.

RCMP detachments in Wood Buffalo, Alta., and Windsor and Indian Head, N.S., took part in the 2015 tests. In addition, the Mounties have advised the federal privacy commissioner of ad-hoc evaluations of the technology.

“For example, they have used the cameras at protests in New Brunswick and in Burnaby, B.C.,” said Tobi Cohen, a spokeswoman for the privacy commissioner.

Evaluations of the cameras were also carried out at the RCMP training facility in Regina, involving scenarios ranging from everyday interactions to use of lethal force.

The RCMP continues to assess the video technology, but no additional field trials are taking place and no cameras have been approved for operational use, Pfleiderer said.

It is too early to speculate on future use of the cameras due to the complex privacy, legal and policy issues that “must be carefully considered before moving forward,” he added.

A number of violent confrontations between police officers and civilians across North America have generated intense controversy in recent years.

The small video cameras are intended to openly capture an “accurate, unbiased and reliable” audio and video account of incidents from the officer’s perspective, the RCMP says in the interim summary.

The purpose is twofold: to gather evidence for prosecution should criminal behaviour be recorded and to bolster accountability if questions or concerns arise after an incident.

“Police are making use of a relatively new technology to hold both police officers, and members of the public we interact with, accountable for any actions taken,” the RCMP says.

The high-resolution digital images the new body-worn cameras produce allow for a clear view of individuals and are suited to running video analytics software, such as facial recognition, privacy commissioners from across Canada noted in a guidance document developed last year.

“Microphones may be sensitive enough to capture not only the sounds associated with the situation being targeted but also ambient sound that could include the conversations of bystanders,” said the document.

— Telling the public when officers are wearing the cameras;

— Ensuring that recordings are uploaded for secure storage, retained and routinely purged;

The RCMP has told the privacy commissioner another assessment of the technology would be undertaken and provided to the watchdog for comment in advance of any national roll-out of body-worn cameras, Cohen said.

The Mounties also have to consider how storage of the recordings would meet requirements of federal privacy law, police records management and court disclosure, Pfleiderer said.

Other things to sort out are video clarity, battery life and the “operational durability” needed when officers are trying to safely resolve difficult situations involving emotionally charged people, he added.