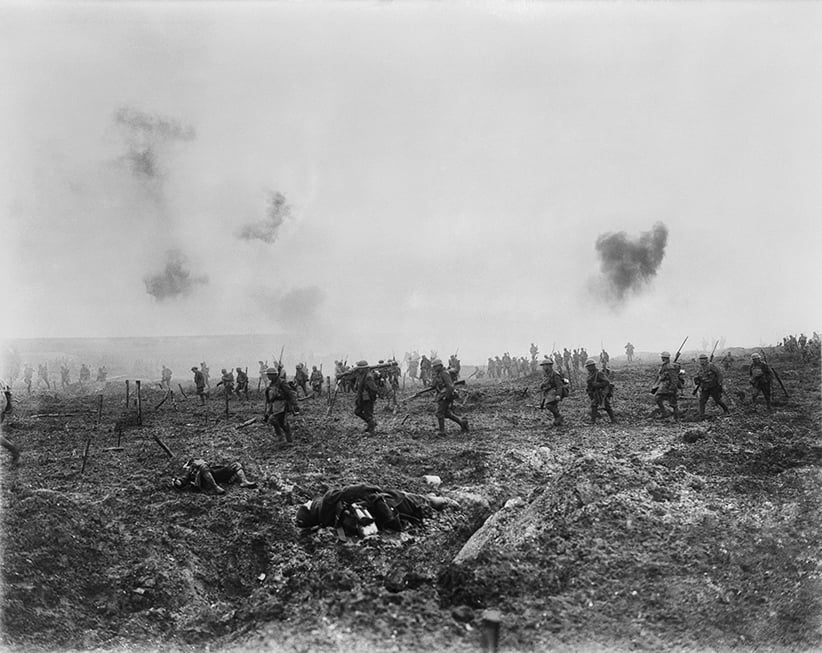 This essay by Brian Bethune first appeared in Maclean’s in July 2005 as the Canadian National Vimy Memorial was being restored.

“Nothing except a battle lost can be half so melancholy as a battle won,” wrote the Duke of Wellington about the dead and dying strewn across the field of Waterloo. A Canadian could have said as much on April 12, 1917, while standing on the grim heights of Vimy Ridge. Mercifully brief as the four-day assault was—a blink of the eye among the infamous months-long battles of the Great War—the victory still cost 3,600 Canadians their lives and wounded 7,000 more. The human damage has, to the extent that such things are possible, long since faded. But to an astonishing degree, Vimy Ridge, the battlefield, still bears the scars left by the human genius for destruction.

The Canadians brought an unheard-of inferno with them to the strategic heights in northeast France. Their assault was preceded by weeks of artillery barrages, with shells fired at the rate of 3,000 a minute during the final days. By the time the Canadian Corps went over the top on April 9, a million shells had landed over a front only a few kilometres wide. Just before the first wave of soldiers, underground mines—each packed with almost 10 tonnes of explosives—were also fired.

British reporter Philip Gibbs watched it unfold like a scene out of Dante, with the sky aglow and “great pools of red fire” gushing from the earth: “A beautiful and devilish thing, and the beauty of it, and not the evil of it, put a spell upon one’s senses.”

Related reading: What war memorials say about us

For the first time, all four divisions of the Corps, men from every part of Canada, fought together—and accomplished something other Allied armies could not. Vimy Ridge was hailed by observers then, and by historians ever since, as Canada’s giant step on the road from colony to nation. 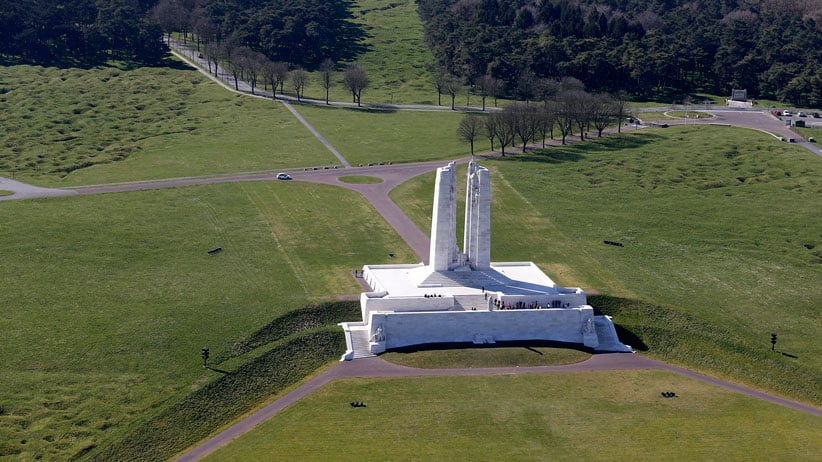 When we decided to erect a monument to our 60,000 war dead there was never any doubt where it would go: Vimy is where Canadian history meets French geography. The French government donated 100 hectares in perpetuity, and Ottawa, flush with postwar pride, uncharacteristically chose the boldest, most expensive proposal. It was a gamble that paid off. Toronto sculptor Walter Allward laboured 14 years—long past the point where his task had become a torment to him—to erect in 1936 the greatest monumental work of art ever created by a Canadian. His legacy is currently in the midst of a $20-million restoration that will preserve it for generations.

The same commanding heights that made Vimy Ridge such a military prize also made it a superb setting for Allward’s massive structure. From a long, low base—walls inscribed with the names of 11,285 Canadians whose bodies were never recovered—rise two 30-m pylons, visible for 60 km over the north French plain, with 20 giant figures symbolizing such concepts as Canada Mourning Her Fallen Sons. Many consider it the most beautiful of the combatant nations’ memorials. (Among its appreciative visitors was a triumphant Adolf Hitler, who came by on his lightning tour of conquered France in June 1940.) It took Allward 2 1/2 years merely to clear the immediate site, choked with unexploded bombs and human remains. The rest of the battlefield was left alone, save for a tree replanting program. Elsewhere, war-ravaged land was restored to farm use, so that Vimy and the smaller Canadian (formerly Newfoundland) memorial at Beaumont-Hamel now contain 80 per cent of the Western Front’s preserved terrain.

That means Allward’s stunning creation is an island in a living moonscape. A sea of shell holes only inches apart, and larger mine craters, mark the surface. Underneath, the ground is honeycombed with tunnels connecting even larger hollows. The surface is subject to frequent and unpredictable collapses—11 in the past two years alone. How many hollows there are is still uncertain, but Al Puxley, Vimy’s on-site operations director, doesn’t need ground-penetrating radar to tell him there are a lot.

Related reading: A ‘Vimy’ for your thoughts

Puxley, 55, who lives with his wife, Susan, about 200 m from the memorial in an incongruously pretty Arts and Crafts-style cottage designed by Allward, notes, “There’s been a septic system here for 70 years, and it’s never had to be emptied. Where does it all go?”

It’s what might be buried in those holes that concerns those on the surface. Seven of the 10-tonne Canadian mines failed to go off in 1917. “We’d really like to find those,” Puxley says dryly as he looks over his flock of grazing sheep. The animals keep the grass under control, a task too dangerous for humans with lawn mowers. None of his flock has perished on the job yet. They’re protected by their light weight, the way they scratch on the surface only, and their lack of the curiosity that kills cats and people.

The operations director, a blunt-talking native of northern Quebec, is full of tales of the continuing trickle of human deaths the Western Front still exacts. Unexploded ordnance is not hard to find; just last year the French government cleared out 197 tonnes from the area around Vimy. Not everyone calls in the experts. “Four or five years ago,” Puxley recalls, “a father and son found a chlorine gas shell, put it into their car and drove away. Unfortunately, it had a slow leak. They were dead before their car went off the road.” Other souvenir hunters find dud grenades. But handling one, notes Puxley, tends to unjam the firing mechanism. All told, the First World War still claims up to 20 lives a year.

The dangerous, ever-changing landscape makes a surreal frame for the monument, itself a mass of contradictions. Only three per cent of the 750,000 annual visitors to the site of Canada’s greatest military triumph are Canadian. The rest are British and French, mostly schoolchildren, who come to see the battleground. The monument is now approached by roads leading to its rear. Allward expected most people to arrive via the rail station in the valley below the heights. He didn’t even build steps for the back. (They had to be added later.) To see Vimy as Allward envisaged it, a visitor has to pass the memorial and walk for 100 m down into the valley, before turning and climbing back toward the monument’s face. The effect is humbling and awe-inspiring at the same time. Few, however, make the climb.

But the greatest irony of Allward’s work is the way the Monument to End All Monuments eerily parallels the War to End All Wars. Like the Versailles treaty that ended the conflict, the Vimy memorial started to crumble almost as soon as it was finished, primarily because of decisions Allward himself made. “He just didn’t understand the stone,” says Ottawa architect Julian Smith. Allward’s choice, limestone he found in an abandoned Roman quarry, makes for a fine vertical stone, Smith says, which is why the pylons and statues are in good shape. But it’s a poor horizontal stone, which is why the walls bearing the names of the dead are eroding. And it’s the carved roll call, with its power to overwhelm visitors’ emotions, that’s the vital part of Vimy.

Smith, a member of the team carrying out the restoration announced by the federal government in 2001, has a profound admiration for the monument. “Allward was a member of an avant-garde theatre group, and he found more inspiration there than in sculpture,” says the architect. “He was influenced by Russian ideas about human beings dwarfed by their settings.” It was Allward who had the “three conceptual breakthroughs that make Vimy what it is,” Smith says. “White stone when most monuments used grey, preserving the terrain, the 11,000 names. And he wanted his blocks to meld — you can see that in the way the carved names go right across the joins.”

That desire to fuse the stones together, notes Smith, is what’s tearing Vimy apart. Allward didn’t leave enough space between them to handle the expansion and shrinkage of the frost-thaw cycle. Grinding blocks are breaking off chunks of mortar. That allows water to course through the structure, depositing lime as it exits, and obscuring the names of the dead. “The monument can’t cope with the pressure it’s created for itself.”

The restorers are now planning to replace every block in the walls by 2007, leaving 20-mm gaps between them so the stones will have enough room to expand. But in the beginning they gave serious thought to just letting it crumble, “because that’s what monuments do over time,” explains Smith. The overall effect then — a literally seething landscape constantly threatening to swallow up a disintegrating monument — would be extraordinary, but there was never really any chance of it being allowed. “Lest we forget,” quotes a smiling Smith: those 11,285 names will never be permitted to fade away.

Vimy is too important, not just to Canada, but to the world’s memory of the Great War, to be allowed to fall to ruin. And its power to move is undimmed by time. Puxley talks about how nothing much is done there on Vimy or Remembrance days. Instead, Al and Susan attend a local ceremony. “Last year we had a single Canadian couple here on Nov. 11. Susan and I asked if they wanted to come to town with us. The mayor lays a wreath at the town cenotaph, I lay a wreath, the band plays the Marseillaise and the French sing it, the band plays O Canada and the four of us sing it. I turn around and the man — not veteran age, but a mature man — had tears streaming down his face. I understand. Still happens to me.”