Negotiations still underway on a fixed date to remove visa requirements, as Liberals promised in campaign 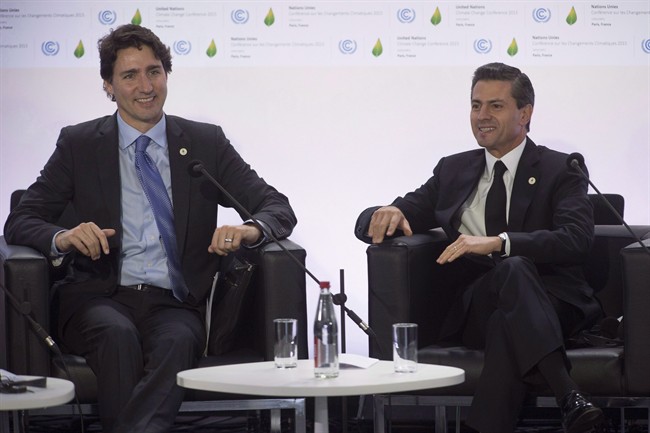 OTTAWA – A plan for how Canada will meet a promise to lift visa requirements for Mexicans will be announced later this month when Prime Minister Justin Trudeau hosts Mexico’s president as part of the Three Amigos summit.

But multiple sources tell The Canadian Press negotiations are still underway on whether the plan will contain a fixed date to remove the visas as Canadian officials push to link it to the implementation of new border controls still in their infancy.

“We shall see,” Immigration Minister John McCallum said when asked whether a deal will be reached by June 29.

The previous Conservative government imposed visas in 2009 to stop thousands of asylum claims being made by Mexican citizens later ruled to be unfounded.

It was a controversial decision that sparked outcry from industry and the Mexican government. The Liberals promised during the election campaign the visa would be lifted.

Pressure to do so intensified as part of Trudeau’s decision to convene the Three Amigos summit — the meeting between the leaders of Canada, the U.S. and Mexico that the Tories postponed last year.

The visa issue was among the diplomatic irritants at the time, though the Tories had promised to lift some restrictions through a new electronic travel authorization system that was supposed to take effect in March 2016, but has been delayed.

Last week, the Liberals announced a long-awaited second part of immigration reform — legislation so that border officials won’t just know when someone enters Canada but also when they leave.

After the visas were put in place, the number of asylum claims fell to 1,199 from more than 9,000, and immigration violations also dropped.

There’s fear the numbers will climb again without the visas, and the electronic travel authorization system and the new exit controls would curb some of that issue, the sources said, speaking on condition of anonymity as they were not authorized to publicly discuss negotiations.

There are also markers used to determine whether to remove a visa, including how many applications get rejected.

The threshold for the temporary resident visa refusal rate is four per cent averaged over the previous three years. For Mexico, the refusal rate from 2013 to 2015 was 6.7 per cent, according to the Immigration Department.

Officials also look at the immigration violation rate — the percentage of a country’s nationals who don’t follow immigration laws while in Canada or in trying to enter Canada.

The rate should be below three per cent over the three previous calendar years and the rate for Mexico between 2013-2015 was 1.9 per cent.

In 2012, the Conservatives placed Mexico on a list of countries it considered safe and therefore unlikely to produce valid refugee claimants, meaning it would handle claims from there differently in a bid to stop unfounded ones.

Numerous groups immediately objected, citing corruption and violence from the ongoing drug war there among many concerns, and argued to suggest Mexico was safe would bias the asylum process against people actually in need of refuge.

The designated country of origin system as a whole is under review by the Liberals, but a new report being released Monday says Mexico should be off that list immediately.

“While Mexico has undertaken significant reforms to combat discrimination and human rights violations, people living with HIV, sexual minorities and other vulnerable Mexicans still have little protection when their rights are violated,” said Samer Muscati, the director of the University of Toronto’s International Human Rights Program, which wrote the report.

“Mexico’s failure to investigate and hold perpetrators accountable for violent crimes against marginalized populations is completely at odds with Canada’s designation of the country as ‘safe’.”