In a refugee camp in the Bekaa Valley, Michael Friscolanti speaks to families holding out for safe haven 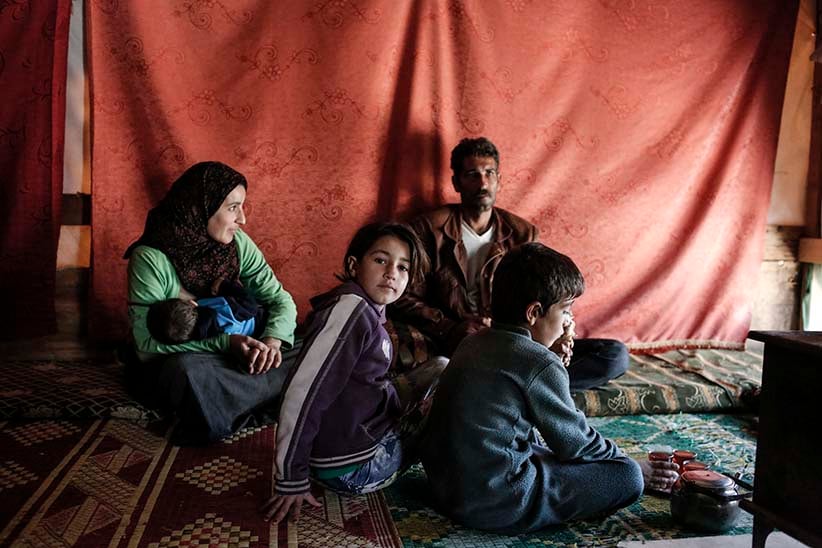 The Bizazi family from Homs sit in the tent that is now their home in a refugee camp in Lebanon’s Bekaa Valley, on November 27, 2015. (Photograph by Sam Tarling)

Zahlé, Lebanon — In the Bekaa Valley, every refugee camp is assigned a number, a universal code used by the various aid agencies that trickle in. “This is 074,” says Ahmed Khalid. He would know. His family—himself, his wife and their eight children—were among the first to move in when the shelters sprang up one year ago.

Before the war, home was the Syrian city of Homs, just over the gorgeous mountains that tower in the background here. Their next home? Maybe Canada, Khalid hopes. “I’ve heard a lot of people talking about it in the camp, and I’m praying to God I will get lucky to get there,” says the 32-year-old, standing outside the white tent where his large family sleeps, night after night. “If you take me, I will go. The situation is not right for us at all.”

It is right for no human.

Nearly 40 families live in Camp 074, inside tilting tents made of little more than wooden posts, plastic tarps and whatever blankets can be mustered. Worn tires line the roofs, ensuring the ceilings don’t blow away when heavy storms roll in. Not a single child in this camp (141, at last count) attends school. Some don’t even have shoes, walking barefoot along the stone paths that connect the camp. “How are you?” asks one little boy, clearly proud of the bits of English he has managed to learn.

In a fair world, each of these smiling children would find safe haven in a vast country like ours. Sadly, though, refugee resettlement is inherently unfair. In a banner year, the United Nations refugee agency (UNHCR) is lucky to resettle one per cent of all displaced people around the world, focusing on those deemed to be the most vulnerable. The agency’s 30 member nations simply don’t offer to accept more than that tiny fraction; if countries were keen to welcome more, the UNHCR would happily provide the case files.

Even the Trudeau government’s ambitious target—promising to fly in 25,000 Syrian refugees, first by the end of the year, then by the end of February—still amounts to a mere drop in the ocean when compared to the four-million-plus who have fled the fighting (not to mention the nearly eight million displaced inside Syria).

But for the families who exist in the purgatory of this camp, the news from Canada provides some sliver of hope, however faint. At the very least, it reminds them that people in faraway places care about their plight. “It makes you feel that they are humans in Canada, that they have humanity inside them,” says Ahmed Khalaif Bizazi, 35, sitting on one of the carpets that cover his tent floor. “I would like to thank the Canadian people, and the Canadian government, for reserving space for Syrian refugees living in this kind of condition.”

Bizazi and his wife, Samaha, have four children: 13, 9, 7 and nine months. In the middle of their small shack is an old wood-burning stove, with a black metal chimney that extends through a circular hole in the ceiling. A single light bulb dangles nearby.

Last summer, a UNHCR representative interviewed the Bizazis, specifically asking if they wanted to move to Canada. They said yes immediately, but have yet to hear back from the Canadian government. “It would be something great for these children if that would happen,” says Samaha, 32, as she breastfeeds her youngest, Mahmoud. “I want to get back my life again.”

Outside a visitor arrives: Awad Aboud Ahmad, a neighbor of the Bizazis back when Homs was home. He now lives with his wife and nine children in a nearby camp—but not for much longer, it appears. “Twenty days ago, they called me from the UNHCR,” says Ahmad, 34. “They told me the Canadian embassy chose me and my family. I told them: ‘I accept, and thank you so much. All my children thank you so much.’ ”

He is now waiting to be summoned by a Canadian visa officer, he says, but isn’t sure how soon that will happen. In the meantime, he doesn’t have enough words to express his gratitude. “I feel like Canada is the mother of these humans that the war has forgotten, by taking this decision to take Syrian refugees,” he says. “Whatever we can do, it’s not going to be enough to thank the Canadians.”

Do you know anything about the country you may be moving to? “No, no, no, no, nothing,” Ahmad smiles. “I just feel so good that some people care for me and my family. If we get there one day, we will work and we will help them.”

Imagine the possibilities, he says. His kids will get an education. Perhaps one will become a doctor. “I don’t know exactly what it will be like in Canada but I’m sure it will be much better,” he says. “My children will at least have a future there.”

For the many left behind in Camp 074, the future remains as hazy as it’s ever been.