Waiting in pain for a no-show ambulance 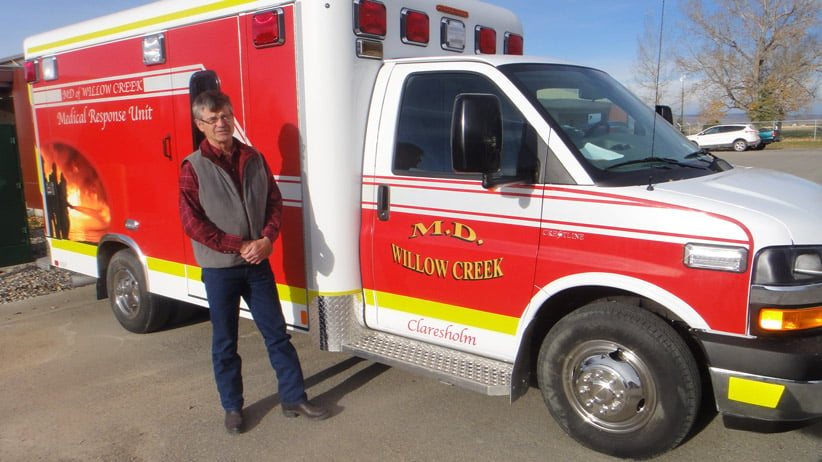 In April 2009, ambulance-response times in the small southern Albertan town of Nanton seemed to double overnight. The town—like the rest of the province—had handed EMS responsibilities over to the newly formed Alberta Health Services (AHS) and, whereas ambulances used to arrive within 10 minutes, they suddenly took 20 or more. In some cases, they wouldn’t come at all.

Neil Wilson, the local reeve, brought the issue to Alberta’s health minister. Nothing changed. “We saw the minister at least twice a year for three years,” Wilson explains. “We thought, ‘We’re not getting anywhere with this,’ so we stepped up to the plate.” The local municipal district, Willow Creek, bought three ambulances and staffed them with trained volunteers. Response times dipped back down to pre-2009 levels. In late January, when three vehicles collided on a southern stretch of Highway 2, Nanton’s EMS arrived in six minutes. AHS took 26.

Nanton’s solution may be unique, but its situation isn’t. Last month, a group of anonymous Alberta medics began using the handle @StatusCodeRed to tweet records of lengthy response times, and instances of Code Red—that is, when no ambulances are available in a certain area—that often spanned entire city regions (including Calgary and Edmonton) and lasted several hours. For a time on Jan. 28, according to one tweet, there wasn’t a single ambulance available between Calgary and Lethbridge, a 200-km stretch. “I think AHS realizes,” Wilson says, “that we in the smaller communities are on the verge of revolution if they don’t do something pretty soon.”

George Porter, a paramedic who has worked in southern Alberta for more than 40 years, has experienced the problems first-hand. Over the past five years, he’s responded to multiple critical emergency calls that took up to an hour to reach. The cycle became familiar: Hospitals, which no longer had to foot the bill for ambulance transfers once AHS was introduced, began calling teams such as Porter’s to ferry rural patients into the city, although they were often healthy enough to take a taxi, a much cheaper option.

“You can’t blame them,” he says. “It’s so easy for a hospital to phone some number and get an ambulance to take a patient wherever they need to.” Then the team would get caught in traffic and end up waiting hours to off-load the patient at an overcrowded hospital. In the meantime, other ambulances—if they weren’t tied up in the same process—would change positions to cover the hole left in the first team’s absence, stretching coverage thin. Porter began to voice his concerns, but the problems persisted. Eventually, he gave up his full-time position; he now works on call. “I did everything I could, but nothing changed,” he says. “Carrying on there didn’t feel right.”

Darren Sandbeck, the AHS’s chief paramedic, says stories like Porter’s—and those shared anonymously on social media—are troubling, but are exceptions to the rule. AHS records show that 90 per cent of response times province-wide are under 12 minutes (in line with other provinces). To reduce the response times of the remaining 10 per cent, AHS is introducing non-ambulance transport vehicles and piloting “rapid transfer units”—multi-bed overflow rooms in a pair of Edmonton hospitals that have shown signs of early success. In March, Sandbeck will begin a tour of the province to “engage front-line staff in a conversation that will help us to hear their concerns and ideas for improving the system.”

Alberta’s problems, however, are hardly exclusive, says Chris Hood, president of the Ottawa-based Paramedic Association of Canada. “Across the country, we see extraordinary stories where people are experiencing long wait times . . . and paramedics waiting to off-load patients from their cots because there’s no available bed for them in the hospital,” he says.“These issues are not specific to EMS; they’re specific to health care.” He says Alberta’s circumstances are particularly severe, because the province is still tackling the transition (even five years on) to a provincial system, much as New Brunswick did in 2007, when it amalgamated 52 separate ambulance services. But the province is nonetheless an example of a national ailment—an underfunded and overburdened system—and “the people suffering are the patients.”

But Porter, the veteran paramedic, is worried his province will see more suffering before it makes any real changes. “It’s like a dangerous intersection,” he says. “The police, the firefighters, the medics, the residents all complain. They say they’ll send it to committee, that there’s no money in the budget. Then somebody’s kid gets killed and, within hours, there’s a crosswalks, lights, a crossing guard, everything. Why do we have to wait until that happens?”