Wake up. The threat to our Indigenous women is Canada's problem. 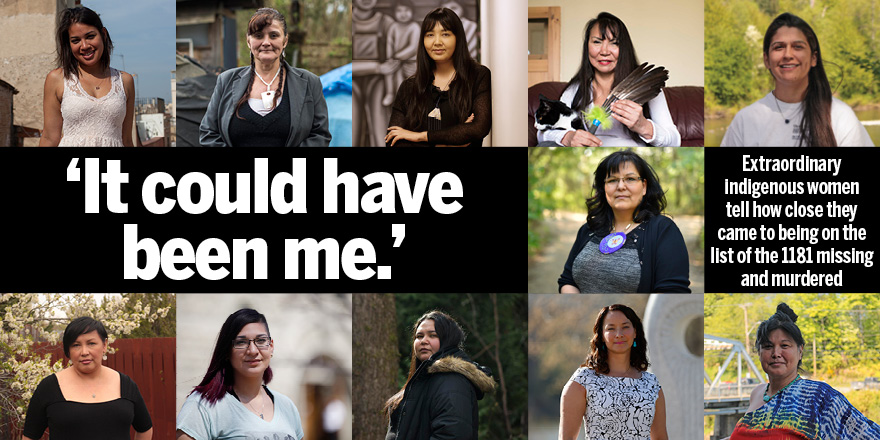 That much became clear to Maclean’s in the months that reporter Nancy Macdonald spent researching this week’s cover package: stories of 13 extraordinary Indigenous women. Each has survived horrific violence. Each came within a breath of joining the missing and murdered. Almost all can trace the abuse and sexual violence that have overwhelmed their families to those federally funded schools through whose doors 150,000 Indigenous children passed for more than a century.

More than one of these women told of four generations of women in their families who were raped. Yet what emerges most clearly from their stories is a tremendous capacity for resilience and forgiveness. Make no mistake: While the subject matter may be dark, these remarkable stories are not. They are triumphant, without exception. They are profiles in courage.

Maclean’s cover story:  ‘It could have been me’: 13 remarkable Indigenous women share their stores

“In speaking out, I am saying: No more,” Kim Jonathan, interim chief of the Federation of Saskatchewan Indian Nations, told Maclean’s. Jonathan is the country’s most senior female Indigenous leader, and the inspiration for this project. She is speaking publicly, for the first time, of her childhood sexual assault, the abuse she endured as a young girl, and the sexual harassment she continues to face as a national leader.

“Having lived through all that I have, I am choosing to say: I am not going to be next,” Jonathan says. “And I am speaking up for our sisters, the missing and murdered, whose voices have been stolen.”

Now is the time to listen to these voices. The full six-volume report from Sinclair’s commission won’t be released until later this year, but already the report contains a sweeping agenda for change, including: removal of the Criminal Code provision permitting corporal punishment; enhanced teaching of Aboriginal languages in colleges and universities; clear goals and strategies for reducing the gap between Aboriginal and non-Aboriginal health outcomes; and a public inquiry into missing and murdered Aboriginal women. If the scars left behind by the residential school system are almost unimaginable, the agenda Sinclair sketched includes a series of concrete steps to achieve measurable outcomes. All that remains is for governments, beginning with the one in Ottawa, to respond.

Indigenous women make up just two per cent of the country’s population, but more than one in four female homicide victims in the last five years, a share that continues to rise. The United Nations and Amnesty International have called repeatedly on Ottawa to take real action. Instead, this spring, the federal government chose to release data on the perpetrators of these crimes, to point the finger back at the community. “Obviously, there’s a lack of respect for women and girls on reserves,” Aboriginal Affairs Minister Bernard Valcourt told the Ottawa Citizen. The minister is looking in the wrong place. This is overwhelmingly an urban phenomenon: Just seven per cent of missing cases and 13 per cent of murder cases among Indigenous women occur on-reserve.

Let us be clear: This is not an Indigenous problem. This is a Canadian problem. Canada did not suddenly wake up to 1,181 murdered and missing Indigenous women.

But, robbed of context, we tend to blame the missing and murdered themselves. We see them as drug addicts, lost—party, even—to their own victimization. That is why it is so important to hear from survivors; they help us understand how we got here. They humanize the fallen. And they lend their formidable strength to the women who continue to suffer.

“I have been there, too. I walk with you,” said Jonathan, addressing those women directly. Jonathan, who faces an election in four months, knows she could be harmed politically by doing so. She did it anyway.

The courage these women have shown in speaking out, and their resilience, are extraordinary. From the ashes of those horrific schools, somehow, women like this have emerged. Their example should serve as a call for a national soul-searching. That Indigenous women in one of the world’s richest, most developed countries continue to be subjected to sexual violence to a degree not seen outside the most violent corners of the developing world cannot be allowed to endure.

Read these survivors’ remarkable stories on digital newsstands and Next Issue now.