Wanted: A place for Canadians to celebrate July 1, 2018 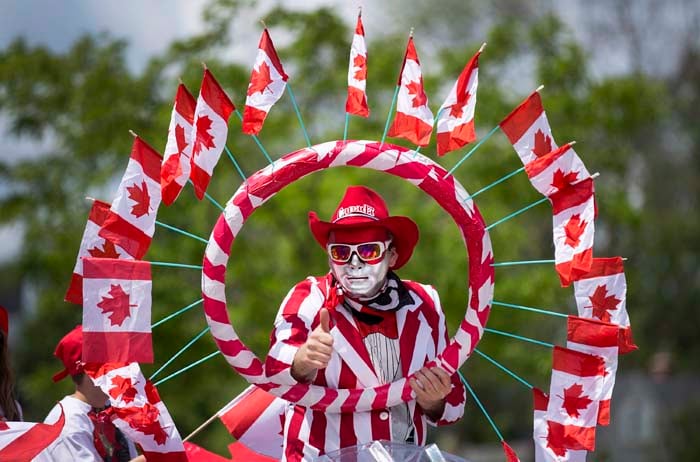 A character on a float gives a thumbs-up along the Canada Day Parade route through Port Credit in Mississauga, Ont. on Wednesday, July 1, 2015. (Peter Power/CP)

OTTAWA — Federal officials are on the hunt for a new location for the country’s marquee party for Canada Day celebrations.

A select group of companies were invited to bid on the project to find a new location near Parliament Hill for the federally organized Canada Day bash once the Centre Block is closed in 2018 for a decade of badly needed repairs.

During that time, Parliament Hill won’t be able to play host to the annual July 1 party that attracts thousands to the heart of the capital.

Government bid documents show the project to find a new party spot is budgeted to cost $30,000, with a final report and recommendation to Canadian Heritage officials due in January. The government says “time is of the essence” to find a new home for the gala.

The bid documents say the new site should be “optimal for the public experience” for “Canada Day celebrations and for future anniversaries.” It should also lie between two bridges that connect Ottawa and Gatineau, Que. — the Alexandra Bridge to the east, and the Chaudiere crossing in the west, meaning the party won’t be moving too far from Parliament Hill and will likely remain along the Ottawa River.

The Canadian Press obtained copies of the documents under the Access to Information Act.

Finding a new home for the Canada Day event — and possibly carnivals held in and around Ottawa’s downtown core during the depths of winter — will also mean looking for a new launching site for the evening fireworks display.

Those fireworks usually go off from Nepean Point, a green space along the Ottawa River just east of Parliament Hill and next to the National Gallery of Canada. But Nepean Point is undergoing its own work around the same time as workers begin renovating the Centre Block, making it a no-go for fireworks and forcing a relocation of the launch pad.

Moving the site will be good news for the National Gallery of Canada, which had asked the government to move the fireworks display.

In a 2014 letter to federal officials, the gallery’s CEO raised concerns that the “very strong vibrations caused by the fireworks” put the building’s windows and its valuable collection of Canadian art at risk while also leaving a “sticky, tenacious residue” on the glass roof.

The building itself has to be evacuated for the fireworks because it sits inside a safety perimeter.

Federal workers do put up barriers to protect the building from the pyrotechnics display, which is aimed away from the gallery. Two technicians stay on the roof of the building to keep an eye out for any flaming fallout and cleanup crews come through afterwards to clean up any debris.

In a briefing note to the deputy minister of Canadian Heritage ahead of a May 27 meeting with the gallery, officials wrote that launching site for the fireworks should stay put for now for safety and aesthetic reasons.

Officials also recommended that the gallery be pushed to provide data and evidence that the fireworks display puts the building and collection at risk.

Josee-Britanie Mallet, a spokeswoman for the gallery, said in an email that the two sides have not to date talked any further about the fireworks issue.