Was 'cultural prejudice' a factor in the Shafia trial?

The Shafia-family ‘honour killers’ say they were victims of stereotyping. Michael Friscolanti reports on the latest in the case.

Nearly four years after they were sentenced to life in prison for a mass “honour killing” that shocked the country, the notorious Shafia family is asking for a new trial—in part, they claim, because the jury’s verdict may have been “tainted by cultural prejudice” and “pre-existing stereotypes of violent and primitive Muslims.”

In a lengthy factum filed at Ontario’s Court of Appeal, the Shafias take specific aim at the “overwhelmingly prejudicial” testimony of a key Crown witness: Shahrzad Mojab, a University of Toronto professor who researches honour-based violence. A leading expert in her field, Mojab told the original Kingston jury that in some Middle Eastern cultures, a family’s reputation is measured by the obedience and chastity of its women—and that even the mere perception of inappropriate conduct can be a death sentence. “The shedding of blood is the way of purifying the name of the family in the community,” she told a packed courtroom on Dec. 5, 2011. “It is an expected act. It is expected that the honour of the family be restored and controlled.”

Lawyers representing the Shafia trio (father Mohammad, mother Tooba Yahya, and eldest son, Hamed) say the trial judge, Justice Robert Maranger, never should have allowed Mojab to take the stand. Her evidence “created enormous prejudice,” they argue, because it implied the accused “had a disposition to commit family homicide as a result of their cultural background.” Originally from Afghanistan, the family immigrated to Canada in 2007.

“Allowing cultural disposition evidence tempts jurors to follow their worst impulses and creates the risk that defendants will be judged by their background rather than their proven actions,” reads their joint factum, obtained by Maclean’s. 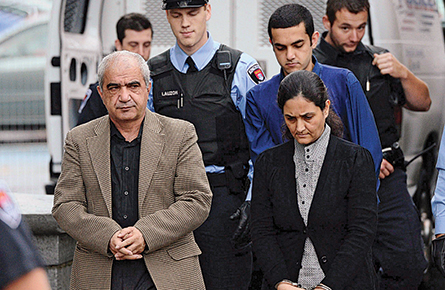 Shafia, his son, Hamed, and his wife, Tooba Yahya, were convicted in January 2012.

“By reinforcing pre-existing stereotypes of violent and primitive Muslims, [Mojab’s testimony] created the risk that the jury’s verdict would be tainted by cultural prejudice.”

The factum points out that Ontario’s high court has described Muslims as “a minority that many believe is unfairly maligned and stereotyped in contemporary Canada,” and that “cultural caricatures of ‘dangerous Muslim men’ and ‘imperilled Muslim women’ ” are “well-entrenched in popular culture and mainstream media.” “By placing the deaths of the deceased in a context of culturally inspired violence against women,” the factum continues, “Dr. Mojab’s evidence risked engaging racial and cultural animus.”

The appeal court should overturn the convictions and order a new trial, the Shafias contend. (As of press time, the Crown had yet to file its factum. A hearing on the appeal is scheduled to begin on Dec. 14 in Toronto.)

Canadians first heard the name Shafia in the summer of 2009, when a black Nissan Sentra was discovered at the bottom of Kingston Mills, a historic lock station on the Rideau Canal. Inside the submerged car were three Afghan sisters—Zainab, 19; Sahar, 17; and Geeti, 13—along with 52-year-old Rona Amir Mohammad, the girls’ supposed “auntie” who was actually their father’s first wife in their secretly polygamous clan.

Authorities initially assumed they were dealing with a tragic traffic accident. It didn’t take long for suspicion to settle in.

Questioned by police, the father, second wife and eldest son told essentially the same story: that the wealthy family of 10 was heading home to Montreal after a Niagara Falls vacation (split between two cars, the Sentra and a Lexus SUV) when they stopped at a Kingston motel for the night. Zainab grabbed the keys to retrieve some clothes from the Nissan, they said—and the next morning, she and the other three were nowhere to be found.

Near the lip of the canal, however, an alert officer found tiny shards of plastic—fragments that were later matched to the Lexus headlight, proving that both family cars were at the locks that night. Even more damning, dents and scratches on the front left side of the Lexus were consistent with damage on the Nissan’s back bumper, suggesting one car rammed the other into the water.

Over the next two weeks, detectives also learned much more about Mohammad Shafia, a tyrannical father who moved his children to the freest of countries but insisted they adhere to his oppressive, old-world honour code. The girls rebelled instead. Zainab ran away and married against his will. Sahar had a secret boyfriend of her own. Geeti, despite her young age, was perhaps the boldest of all, telling anyone who listened that she wanted to be placed in foster care.

When investigators planted hidden wiretaps, they listened to Shafia rail against his dead daughters: “Whores.” “Filthy.” “Treacherous.” “May the devil s–t on their graves!” 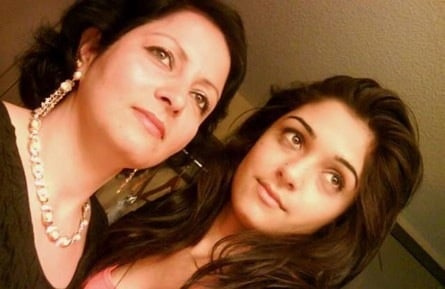 Rona (left) and Sahar Shafia are shown in this photo released by the courts Nov. 22, 2011. (The Canadian Press)

Four months after their arrests, the case took another bizarre twist. Speaking to a private investigator hired by his father, Hamed offered a new version of events—admitting for the first time that he did see Rona and his sisters drive away from the motel. He followed them in the Lexus to make sure they returned safely, he explained, and accidentally rear-ended the Nissan while it was attempting to turn around near the locks. He was picking up shattered bits of headlight when he heard the splash, he said.

Asked why he never told police or his parents what really happened, Hamed said he was “scared” they would “blame me” for allowing Zainab to drive without a licence.

At trial, defence lawyers stuck to that story: Mom and Dad had no idea what happened; Hamed did, but he kept it a secret.

After just 15 hours of deliberations, the jury agreed with the prosecution’s theory: that the Shafia girls had so shamed the family name that mass murder—disguised to look like a foolish wrong turn—was the only way to restore that tarnished honour. Rona was a convenient throw-in, killed with the others after a years-long rivalry with her fellow wife. “It is difficult to conceive of a more heinous, more despicable, more honourless crime,” Justice Maranger said on Jan. 29, 2012, after the guilty verdicts were announced.

The convicted killers promptly filed an appeal, but there was little movement on the file for more than three years. In the meantime, the infamous case became Exhibit A of honour-based violence seeping into Western countries. When the Harper Conservatives recently announced a controversial hotline to expose “barbaric cultural practices,” supporters pointed to the Shafias one more time.

But with an appeal date finally set, there is a possibility, however slim, that the sensational case will be tried all over again.

At 110 pages, the defence factum lays out multiple arguments for a new trial, from the improper use of hearsay evidence to the judge’s supposedly flawed instructions regarding how the jury could use particular statements made during police interrogations. But it focuses on a key question that, even now, remains a mystery: Where exactly did the women die? Autopsies confirmed drowning as the official cause of death, but if one vehicle really did nudge the other into the water, were the four victims already dead when the Sentra sank? Would the women just sit there, waiting to be pushed over the edge?

“The jurors were faced by a problem with no neat solution,” the factum contends, leaving prosecutors no choice but to present “a speculative and convoluted theory that the deceased were drowned somewhere else before the Nissan was sent into the canal.” Police, however, found not a shred of physical evidence pointing to a second crime scene.

“Viewed in isolation, the accident and murder scenarios could both fairly be characterized, for different reasons, as problematic and implausible,” the Shafia factum continues. “In this context, there was an elevated danger that the jury would fall back on prejudicial reasoning to decide the case.”

Permitting expert testimony on the phenomenon of honour killings only exacerbated that risk, they argue. Mojab told jurors that “what masquerades as honour is really a man’s need to control a woman’s sexuality”; that numerous family members, mothers included, typically conspire to commit the crime; that even rumours about a woman engaging in premarital sex “is sufficient to warrant an attack on her life.” As prosecutor Laurie Lacelle said in her closing address to the jury: “Dr. Mojab’s evidence allows you to make all the connections that you need to, to understand how a mother, a father and a brother could kill their own flesh and blood.”

Such “opinion evidence has no place in a criminal trial,” the factum argues. “The jury could not properly conclude that the deceased in this case were murdered by their family members because some other women from similar cultural backgrounds had been killed by their relatives in similar circumstances.” In fact, the brief states, “it is both wrong and offensive to imagine that Canadian jurors needed to be educated about the alien attitudes of people from the Middle and Near East in order to conceive of the possibility that people might kill other people they loved for misguided reasons.”

The Shafias’ lawyers declined an interview request, saying they prefer to argue the merits of the case in court, not through the media. (As Maclean‘s previously reported, Yahya’s original lawyer, Peter Crowe, is suing Shafia for $143,000 in unpaid legal bills; a trial date is expected to be set later this month.) Contacted last week, Mojab has yet to respond to a request for comment.

The Shafias, meanwhile, remain behind bars, hopeful that a technical question of Canadian law will grant them what Rona, Zainab, Sahar and Geeti will never enjoy: a second chance.