We need to stop wringing our hands over armed drones 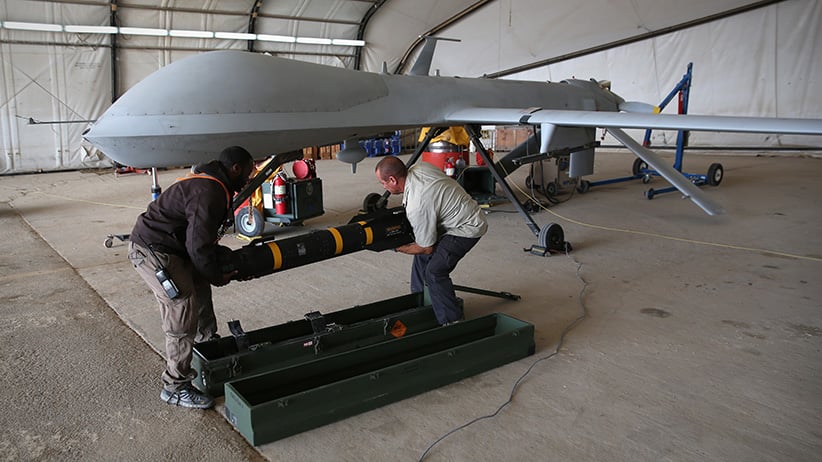 It was an otherwise utterly unremarkable thing for Canada’s chief of the defence staff to say out loud: we’d like some drones, please, and the ones with the capability of carrying precision-guided munitions would be best. That’s pretty well all Gen. Jonathan Vance mentioned, almost in passing, when he appeared last week at a Senate defence committee meeting. What’s remarkable is that Vance’s comments were taken in some quarters as the raising of a curtain on a stirring debate about a “controversial” subject.

Why all the angst?

Remotely operated aircraft have been on the Canadian Forces’ wish list since the 1990s. Trials of a variety of drone prototypes began at the Canadian Forces Experimentation Centre in 2002. During the Afghanistan mission, the Canadian Forces leased two types of long-range drones for surveillance purposes, and from time to time called in for help from missile-bearing American drones. As far back as 2008, the Canadian Forces brass was explicit: drones with “all-weather precision strike capabilities” were a “requirement” for Canada’s overseas operations.

Nobody is proposing a covert black-ops assassination program here. This isn’t about weaponizing space and we’re not being lured by the military-industrial complex into some sinister high-tech arms intrigue. During last year’s election campaign, Justin Trudeau promised to look for a cheaper alternative to the Conservatives’ closed-bid, $44-billion, 40-year F-35 jet purchase. Defence Minister Harjit Sajjan is in the early innings of a full defence policy review, and it logically follows that the little remotely operated airplanes Trudeau promised to acquire for a “leaner, more agile, better-equipped military” might sensibly come geared to pack “smart” bombs.

Several European NATO countries have already acquired weapons-capable drones, and so have NATO’s adversaries. Even Iran’s Lebanese proxy terror group Hezbollah was using drones to drop bombs in Syria two years ago. Let’s be cautious, surely. But do we really need to go into group therapy about this?

It’s true that since 9/11, the application of conventional military rules of engagement has gotten a bit foggy. The Taliban were not an “enemy state” but the Canadian Forces conducted its operations in Afghanistan as though the rules of war applied anyway. We are now at war with Daesh, also known as the Islamic State, but at the same time we’re still not legally in a “state of war.” With the tripling of our Special Operations contingent in northern Iraq in tandem with the withdrawal of the six CF-18s the Conservatives sent in, Canada is still very much in the thick of the fighting. But Gen. Vance insists that the Canadian Forces’ new contribution no longer amounts to a “combat mission.”

It can all get a bit esoteric, but there’s no need for Canadians to over-complicate what should be a fairly straightforward assessment of the cost-benefit merits of acquiring drones equipped with a payload capacity. It’s not that complicated: “They’re just not fighter jets. They’re basically a different type of aircraft that can be used to carry precision-guided weapons into a combat environment,” Mark Collins, a fellow with the Canadian Global Affairs Institute, told me. The same kinds of rules and ethical considerations apply fairly seamlessly. Said Gen. Vance: “In my view there’s little point to having a [drone] that can see a danger but can’t strike it.”

But here’s where legitimate concerns about drones can give way to outright paranoia.

Armed drones have become Barack Obama’s way to engage in terrorist-infested hellholes without putting “boots on the ground.” For years, the CIA has been running a secrecy-shrouded program of targeted killings in Afghanistan, Pakistan and Yemen, and more recently in Somalia, Syria and Iraq. Because it’s a covert program, it’s against the law for American officials to talk about it.

Civilian-casualty estimates are usually ballpark and often wildly exaggerated. Congressional oversight has been a farce. A push to completely shift the shabby command-and-control lines out of the CIA and into the Defence Department fell apart three years ago, owing to the usual Washington turf battles and congressional brinksmanship.

That’s not quite how things work in Canada, and there’s little evidence that Canada’s new government is favourably disposed to top-secret overseas assassination boondoggles.

Every couple of years, the subject of Canada acquiring drones comes up again and there’s always the same scary background music. The drones the Canadian Forces are looking for are mostly for surveillance and reconnaissance along our borders and coasts anyway. If it’s really a go this time, no purchase contract is expected before 2020. Delivery isn’t anticipated until 2025.

There’s no reason to be wringing our hands about this. There never was.

Terry Glavin is a Canadian journalist and author of Come From the Shadows: The Long and Lonely Struggle For Peace in Afghanistan