We the bandwagon: Ranking Canada's most Raptors-happy cities

From coast to coast (and even in Montreal), Canadians have embraced Toronto's team. But which city is the most suddenly Raptors-mad? 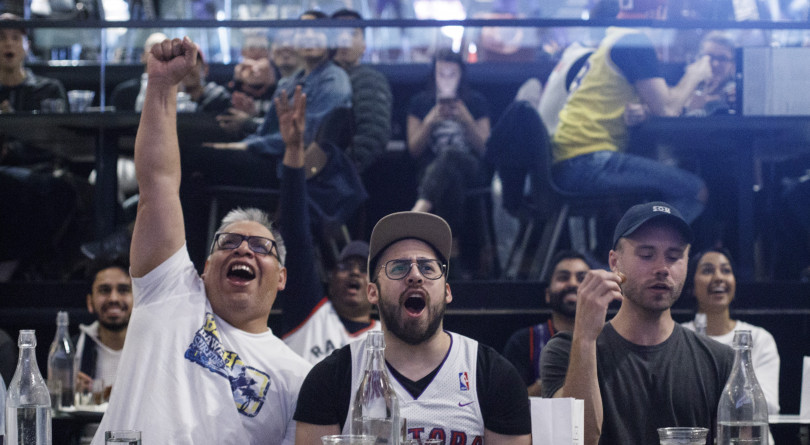 Fans watch the Toronto Raptors take on the Golden State Warriors during Game 5 of the NBA final, in Edmonton on June 10, 2019. (THE CANADIAN PRESS/Jason Franson)

You’re used to Pat from Sales coming by your cubicle area to complain about random crud, but lately it’s all about how hard it is to find her son a Kyle Lowry jersey. Your friend wrote on Facebook that Kawhi Leonard’s been his favourite Raptor for years (this is Leonard’s first year with Toronto). Dad now wants to put an asterisk on Father’s Day plans, depending on whether the series stretches to Game 7.

This is Canada, enthralled like never before with a basketball team.

It’s not easy to precisely measure which Canadian city has fallen hardest for the Raptors. Bars in almost every city are packed on NBA Finals game nights, as though the Olympic gold medal men’s final is taking place every third evening. Most cities have mass public viewings—14,000 Regina residents filled the football stadium for Game 5, which amounts to 1/16th of the entire city watching the one-point loss.

Twitter Canada has offered up one intriguing measure of bandwagoning. It’s compared the volume of daily #wethenorth tweets during the playoffs to the NBA regular season. Here’s how major cities stack up:

The city has invested so much hope that Oilers centre Connor McDavid would bring back the City of Champions heyday. This April, like in so many Aprils before it, Edmontonians found themselves in desperate search of a title run to cheer for. Enter Nick Nurse’s team.

Spotted this on the Southside of Edmonton, I guess the Raptors are actually taking over the country.. #WeTheNorth pic.twitter.com/uBYDpPpZ7C

The home of the moribund Vancouver Canucks has never felt more regret that local apathy helped push out their NBA franchise in 2001, after only six seasons. The Grizzlies name seems odd for Memphis. Vancouverites are making their best pitch for a second chance as a big-league basketball city.

#Raptors fans in #Vancouver are looking like this today. #WeTheNorth #RaptorsIn5 pic.twitter.com/N8B5962ENx

The Flames bowed out of the NHL playoffs in the first round. That feels like six years ago. It’s so easy to find a bar stool here for a Stanley Cup finals game these days.

Parliamentarians wanting to get behind a universally beloved cause surely helps boost the pro-Raptors Twitter activity in the capital.

Before QP today, we joined @CPC_HQ Leader @AndrewScheer on the steps of Parliament Hill to let the @Raptors know were cheering for them on from #Ottawa. #WeTheNorth #Barrie #Innisfil #cdnpoli #onpoli #LetsGoRaptors pic.twitter.com/U7UAKXLjJU

This many people jamming Peel Street to curse Toronto, sure. But to cheer? What a time to be alive.

Fun fact: The Blue Jays, currently in a rebuilding phase, resolved as a team to be even crappier in recent weeks to direct more local attention to their NBA counterparts.

Fun and this time real fact: This is the sixth straight year the Raptors have made the playoffs. The bandwagon in Toronto, these annual Jurassic Park rituals, have been gathering for a quite a while. Locals, not content enough with street parties, crave a championship parade.

MORE ABOUT THE TORONTO RAPTORS: