'We were the pandemic cohort': How medical students made life easier for doctors 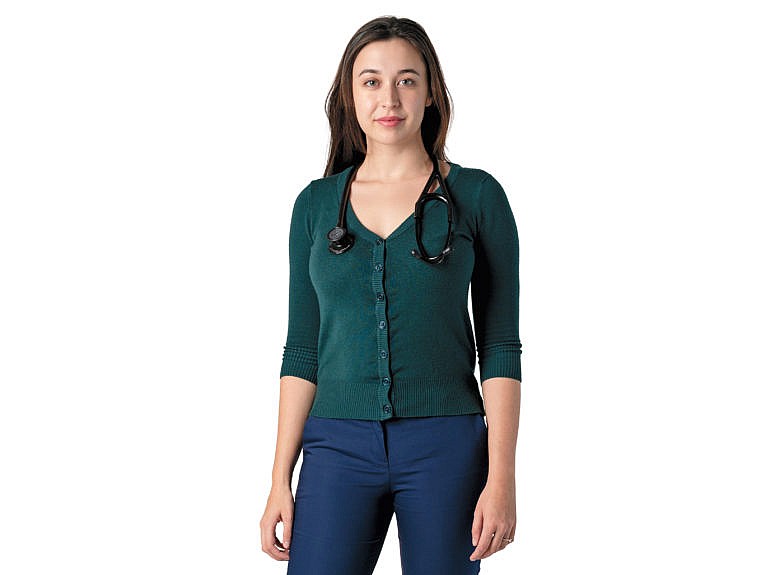 Yashoda Valliere. This portrait was taken in accordance with public health recommendations, taking all necessary steps to protect participants from COVID-19. (Photograph by Lucy Lu)

Yashoda Valliere, a fourth-year medical student at Western University, attended a microbiology class last March, where they reviewed antibiotic therapy. It would be the last time she and her classmates would ever be together on campus; a few hours later, the university sent an email declaring campus closed and in-person classes suspended as the COVID-19 pandemic encroached.

On a group chat, she and classmates shared their sense of shock, Valliere recalls, “feeling a little bit helpless, a little bit frustrated we couldn’t do much to help our colleagues on the frontlines.”

At one point, someone mentioned that Ontario schools would be closed for two extra weeks—this would become the never-ending March Break, but no one knew that then—leaving working parents scrambling for childcare.

Out of that conversation, a beautifully simple idea was born: as med students, they couldn’t yet head to the frontlines of this generational health-care battle—Valliere’s class was a few months away from graduating to become resident physicians—but they could backstop those who were there. Valliere and half a dozen other students in different years at the Schulich School of Medicine and Dentistry put out a call for volunteers, then announced on Twitter and through word of mouth that they would provide childcare, grocery and prescription pickup, or run essential errands for medical professionals who needed it. In those bewildering early days of the pandemic, it allowed medical students to give back and feel less powerless, while providing essential help at home for those fighting to get a grip on this virus. “I think it was something that gave people hope and a sense of solidarity, on both ends,” Valliere says.

With no experience organizing anything of this nature, the volunteer coordinators rapidly sorted out the logistical issues that came up—sending students in pairs to provide childcare for liability reasons, for example, and pairing volunteers with only one family to reduce points of contact. Soon, the idea took on a life of its own, rapidly spreading to 13 of Canada’s 17 medical schools. Western’s volunteer corps ultimately helped about 25 families, though they wish they’d been able to do more. “This is amazing and this made me cry tonight,” wrote one person who heard about the effort. “I don’t need your help, I just want the medical students to know this is a fantastic idea.”

The volunteer program was intended to buy parents some time to figure things out during what was initially a short-term school closure, so it wound down after two weeks because the student volunteers were still juggling their studies.

In June, Valliere graduated and began working as a resident physician at a family medicine practice in Kitchener-Waterloo, Ont. She’s grateful the volunteer program gave her and her classmates a way to feel useful and connected, and it’s been a relief to move from the sidelines to the frontlines. “There’s also definitely that sense of solidarity in the clinics and in the hospitals, this sense among me and my co-residents that we’re all in this together,” she says. “Years from now, we’re going to look back and remember we were the pandemic cohort.”