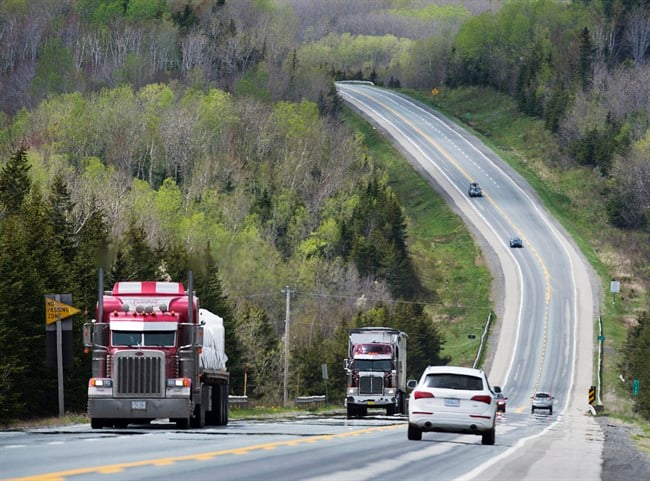 Highway 104, the artery connecting mainland Nova Scotia to Cape Breton Island is seen on Tuesday, May 24, 2016. Public pressure has been growing to have the section of the highway between New Glasgow and Antigonish, N.S. twinned. The road has a high accident rate with many fatalities. THE CANADIAN PRESS/Andrew Vaughan

BARNEYS RIVER, N.S. – Years of responding to the carnage left by high-speed collisions along an untwinned stretch of the Trans-Canada Highway have transformed Joe MacDonald into a crusader.

MacDonald, chief of the Barneys River Fire Department since 2000, estimates he has seen hundreds of accidents along Highway 104 since joining the volunteer force in 1987.

“It gets to you mentally,” said MacDonald Tuesday, following a Victoria Day crash that claimed the life of a 35-year-old Halifax woman near Broadway in Pictou County. “It’s hard to keep going sometimes.”

It was the 15th fatal collision on the untwinned 37-kilometre portion of the highway between New Glasgow and Antigonish since 2009.

MacDonald said his department has responded to 14 of those deadly crashes, a burden that has left him frustrated and one of the most persistent voices calling for the government to twin the highway.

He said Monday’s crash occurred in a passing zone along a straight section of road that also has a rumble strip down the centre line to warn drivers.

But, he said safety measures can only go so far when vehicles travelling in the opposite direction are so close.

“You are only a foot or two apart,” MacDonald said. “It doesn’t take much to get into the other lane.”

Last June the provincial government announced a study of using tolls to help pay for the twinning of up to eight sections of 100 series highways.

The government also said it would hold a series of public consultations before deciding what to do.

MacDonald said he and others in nearby communities are pushing for the stretch to be twinned. He said an online petition has gathered close to 6,000 names, while a Facebook group has another 1,700 supporters.

The campaign is also a personal one for MacDonald, because his mother was seriously injured in a 2009 crash in a section of the highway near Sutherland’s River that is now twinned.

“We just want to bring it to everybody’s attention that the cure for this problem is twinning,” he said. “I’ve been told by contractors that if the province went ahead with twinning by tolls all of the eight sections could be twinned within four years.”

Transportation Minister Geoff MacLellan said Tuesday his department is finalizing the study’s engineering and financial components, before beginning public consultations that should be completed by summer’s end.

MacLellan, who often travels the highway on his way to his Cape Breton constituency, said he understands the call to do something to avoid head-on collisions.

“That’s why we need to bring it (the study) to Nova Scotians directly,” said MacLellan. “If we are going to do something with respect to long-term large-scale twinning of our highways, we’ve got to look at this alternative form of financing.”