Welcome to Canada, the hotbox of the world

Tabatha Southey: If Canada had a door, clouds would come billowing out whenever we opened it, just like the teachers’ lounge circa 1979 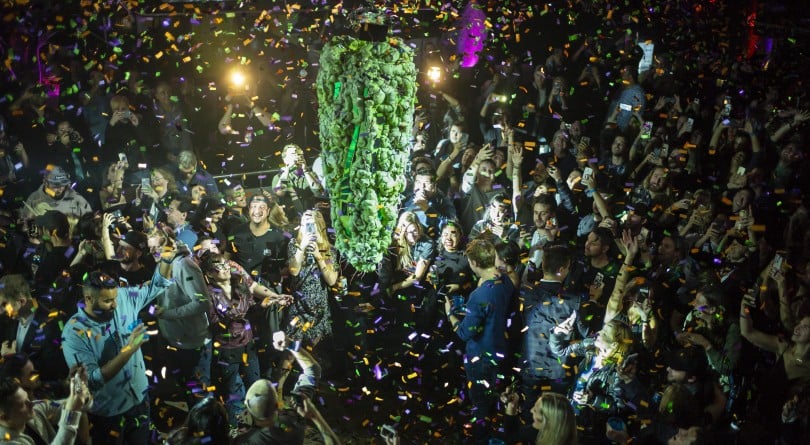 TORONTO, ON - OCTOBER 17: Torontonians gather at a local concert venue to watch the "bud drop" at the stroke of midnight, in celebration of the legalization of recreational cannabis use on October 17, 2018 in Toronto, Canada. (Photo by Ian Willms/Getty Images)

Today, with the legalization of cannabis, we witnessed a shift in Canada, a literal shift. Things will never be quite the same. This is the day vast numbers of Canadians moved their weed to a slightly more convenient location, one where the kiddies still can’t get to it but our mother can see it if she’s being nosy, because: “What?”

As of today, Canadians can answer curious eyes scoping out the rolling papers in their wallets with “‘What?’ face” with impunity. And “‘What?’ face” being the natural resting face of most Canadians, this in itself is liberating.

October 17, 2018 marks the date Canadians are free to move their weed out of the little Mountie tin in the back of the cupboard and into a handy mason jar at the front of the cupboard. We are only the second nation in the world to make the move to full legalization of cannabis for recreational use. The first country to do so, Uruguay, has a serious “small tins with RCMP officers in dress uniform on them” deficiency, so they missed out on a lot of the magic of marijuana moving day.

READ MORE: The real reason that cannabis is now legal in Canada

To get some idea of scale, think of what is going on across the country today as something akin to a national log drive. Massive amounts of marijuana are being put somewhere slightly less clandestine. Thousands of kilograms from the back of mums’ underwear drawers alone. Other than that, very little is going to change in Canada. Some people rushed straight out, or went online, to buy weed from the government just because they can now. There was a kind of commemorative stamp-like stampede.

This will no doubt generate a bit of panicked speculation that thousands of people who were not smoking weed are going to start now. That’s just not likely happen. Although, to be honest, I would totally watch Harold and Canada Go to White Castle and next time the Americans, with their utterly staid and unpsychedelic-coloured currency, suggest we really need to look at our free trade deal we can just answer, “Sure, but have you ever really looked at your hand?”

One big reason not to worry about Canadians smoking a lot of weed is that Canadians already smoke a lot of weed. A 2013 Unicef report found that one in three Canadians aged 15 to 24 had “sparked a doobie,” as their parents would say, to much eye-rolling, in the previous three months — making Canadian youth the most pot-smoking-est youth in the world. Statistics Canada data gathered in 2012 indicated that  42.5 percent of all Canadians have received the dutchie on the left hand side and 16 percent of us have got to the point and rolled another joint over the past three months.

If Canada had a door, clouds would come billowing out whenever we opened it like we were the teachers’ lounge, circa 1979. We are the world’s hotbox. This is what we do. It is who we are. Why, if this works out we should legalize hockey and at least decriminalize the butter tart.

I suspect there’s not all that much room to expand the market here, although I am honestly not fussed either way. Mostly, the demand is just going to tend towards a different supplier. It’s going to be more bureaucratic and less baggy-in-a-bathroom from now on, something I think a lot of Canadians, particularly boomers, will appreciate. There will be jobs, good ones, and profits, healthy ones, and inequitably applied laws that targeted black and Indigenous people are being struck from the books. Little else will change. But don’t let the fact that this probably won’t have any significant impact on our national smoking habits fool you into thinking this isn’t a momentous occasion. Remember, we’re talking about relocating a lot of weed. Today it’s like Dank Moses stood up and demanded “Let my green buds go!” and Pharaoh Tokingkhamun is, as his name would suggest, far too busy lighting one up to have his heart hardened. Now, the great marijuana exodus has begun.

All across Canada, we’re casting aside those novelty hollow books on the top shelf and ridding ourselves of our carefully hidden mint cases, (Altoids, the curiously herbal mint). Our stashes will not suffer being stashed away in a fake pop can for one moment longer.

READ MORE: The grandfather who bought Canada’s first legal weed (near as anyone can tell)

There may be injuries. A whole nation can’t simultaneously reorganize their medicine cabinets without someone slamming their fingers in a door. Doubtless we will see a sharp increase in rolling papercuts. Somewhere, someone will leave a roach clip where a innocent child can find it. They’ll hear it from across their house “Ow, that kind of hurt” and come running to find something very far from every parent’s worst nightmare: a child that has slightly pinched a finger, and all they’ll be able to say is, “How did you think this would end? Don’t stick alligator clips on your finger, they’re called ‘alligator clips’ for a reason.” Such tragedy is the price of progress.

We’ll tell future generations about how we were there for the Great Marijuana Migration. We’ll regale them with stories of how we watched in awe as a lump of hash crept out from under that set of hideous placemats that no one would ever want to use. Across Canada, wide-eyed children will hear our story of greeting the wandering weed exiting dad’s tool shed with a wave and a soft “Heya, green, make yourself at home.” And of that time we caught a great bundle of marijuana rolling down the stairs and asked it “Where ya going, bud?”

“I’m taking myself out to the compost, you hid me so well and you forgot I was there” we will tell our grandchildren the cadaverous cannabis responded. “I’m old and dry and impotent and I don’t smell quite right, but it’s okay, you can order more of me online, or replace me at a licensed private retailer or a government-owned retailer now.” We will look at those (really gullible) future generations with a tear in our eye and tell them what we said to that sad old devil’s lettuce on this day as it moved somewhere, a small part of this epoch-making 420 trek, ‘Godspeed, tumbling weed.”