Some confess to vague mistrust of municipal systems and government-sanctioned health advice. Their ideas range from the earthy to the fanciful. 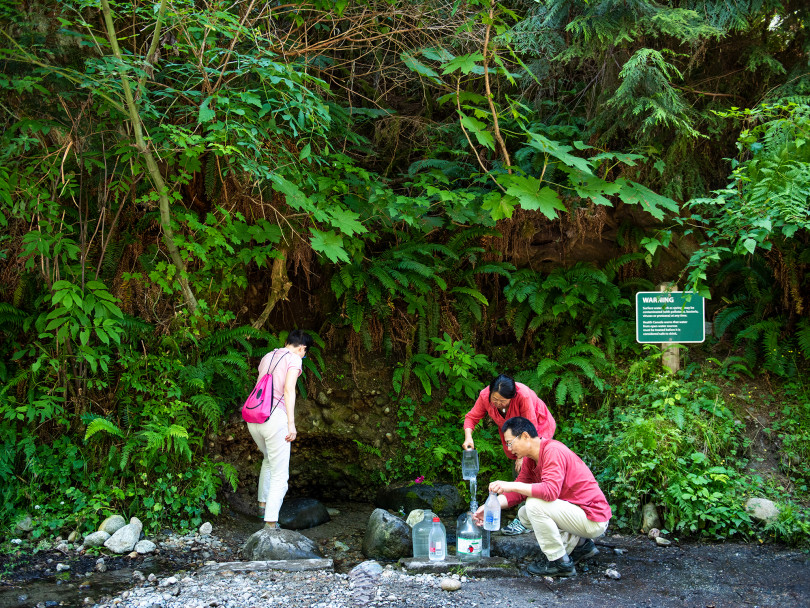 Once a month, Susan Chipman drives to a mountainside spring that burbles from the ground in North Vancouver and ﬁlls four 20-litre containers with water to use for drinking and cooking. When full, each container weighs 20 kg. Chipman lives on the top floor of a three-storey walk-up apartment in Vancouver. Her building has running water, of course, supplied and sourced by Metro Vancouver from protected reservoirs even higher up in the North Shore Mountains. But it lacks an elevator. So, she hauls her water jugs up the stairs, one in each hand for balance. “It’s a bit of a chore in the true sense of the word, but it’s worth it, I think.” Chipman says she was hooked from the ﬁrst sip. She tasted it and thought, “OK, this is real water.”

Chipman is one of a growing number of people who religiously collect drinking water from this spring along the road to Lynn Headwaters Regional Park. They do it for myriad reasons but, like Chipman, all value the clean taste. Metro Vancouver uses chlorine to disinfect tap water, and those with sensitive palates eschew what they regard as plonk from the tap because of its purportedly chemical taste and aroma. Some confess to vague mistrust of municipal water treatment systems and government-sanctioned health advice, in general. Their ideas range from the earthy to the fanciful. Alla Revenko, who regularly drew water from the Lynn Park spring before moving to Maple Ridge, which is too far away, says the spring water “gives us pristine energy, natural energy.” Yet Revenko also speaks ominously of how bottled water is affected by “vibrations” from production equipment, while her husband Igor explains that the couple believes that “water absorbs energy and is a bearer of information.” They’re in the park for a hike on this day, but they ﬁll a few bottles for old time’s sake.

There are pockets of spring water collectors, sometimes called water foragers, in all corners of North America. Enthusiasts of all ages connect online through websites such as ﬁndaspring.com to map and share information about spring locations and water quality. There is a “FindASpring—Why Spring Water?” YouTube video featuring a young, bearded hipster who proselytizes about “fresh water from the earth, the way it was meant to be.”

At the Lynn spring, most people pay no heed to a large green sign posted beside the spring with a Health Canada warning that surface water may be contaminated and must be treated before drinking. “I just drink it straight,” says Joe Chouinard, who grew up in North Vancouver. The self-described child of “hippies,” his family always drew water from the spring and, now that Chouinard is married and living in Burnaby, he continues to make the trek. “I’ve never been sick.” On days when he spots wet dog pawprints on the roadway near the spring, he waits half an hour or more before ﬁlling his bottles to allow the flow to flush out potential contaminants.

Health ofﬁcials caution that without testing, it is impossible to know if spring water is indeed safe to drink. Phil Muirhead, a drinking water specialist with Vancouver Coastal Health, says several things can be wrong with even the freshest-looking spring water. “And all the bad stuff, you don’t necessarily taste,” he says. Spring water can have high levels of naturally occurring chemicals such as arsenic. And if the water is not coming from a pipe but is collected from open pools like the one at Lynn, the water can be contaminated by feces from dogs or other animals that may carry parasites such as giardia or cryptosporidium.

RELATED: These chemicals in North American waters could spark a health crisis in Canada

Muirhead knows a lot of people drink straight out of the Lynn spring and hasn’t heard of problems. “In some springs, none of that may be an issue,” he says. But he stresses that the heath authority has not tested the water: “The big challenge is, bacteriologically, things can change from one day to the next.”

None of this worries Min Wu who, once a week, lugs carboys from her home in Vancouver to ﬁll at the spring. She drinks a lot of tea and likes the water’s taste and supposed health beneﬁts. “It’s a gift from nature.” She notes the spring runs constantly and believes most contaminants are flushed out. Nonetheless, Wu boils the water before drinking, as she, better than most, understands the risks associated with drinking untreated water. She tells Maclean’s: “I’m a chemist.”

This article appears in print in the September 2019 issue of Maclean’s magazine with the headline, “Foraging in spring.” Subscribe to the monthly print magazine here.