Whale washes up on N.S. beach near where other species found dead

In a 100-km swath of western Nova Scotia, a mysterious fish kill continues to claim more and more species 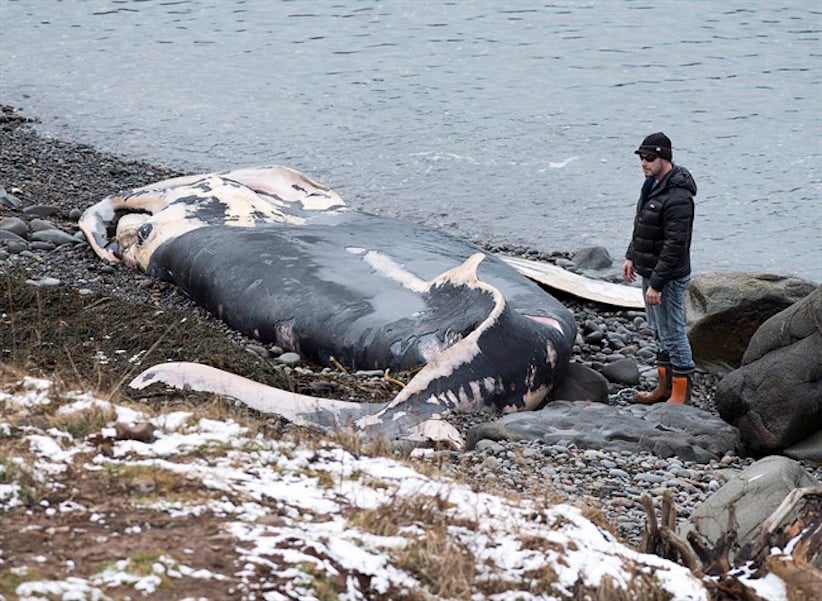 Nicolas Trudel from Quebec City views a decaying 9-metre humpback whale carcass in Whale Cove, N.S. on Thursday, Dec. 29, 2016. Fisheries officials say it’s too early to say whether the whale’s death is related to a mysterious fish kill that appears to have spread to new species, including starfish, clams, lobstersÂ and mussels now washing ashore alongside thousands of herring in St. Marys Bay. THE CANADIAN PRESS/Andrew Vaughan

DIGBY, N.S. – A dead whale has washed up in the same area of western Nova Scotia that has seen scores of dead herring, starfish, clams and lobster litter the shoreline — but fisheries officials say it’s too early to say whether the deaths are related.

Jennifer Thibodeau and her husband were driving past the beach on Whale Cove on Tuesday when they spotted what appeared to be a young whale, perhaps nine metres long, near the high water mark.

She said the humpback whale did not appear to have any external injuries that could easily explain its death.

“It’s really sad. I was crying about it this morning,” said Thibodeau, whose home is about 150 metres from the beach.

“From our house we can look out and watch them jump out of the water in the summertime. You can hear them blow and … you can see them breach and it’s sad to think that’s one of those whales that we watched.”

Fisheries officials say it’s too early to say whether the whale’s death is related to a mysterious fish kill that appears to have spread to new species, including starfish, clams, lobsters and mussels now washing ashore alongside thousands of herring.

Officials have tested for infections, diseases, toxins, predators and broader water quality issues — with all coming back negative so far.

Dead herring have been found in a 100-kilometre swath of western Nova Scotia from St. Marys Bay to Tusket, with most between the mouth of the Sissiboo River and Plympton.

A Fisheries biologist gathered samples in sub-tidal areas of St. Marys Bay Thursday to measure oxygen levels in the water near the beaches where herring began washing up about a month ago.

Kent Smedbol, manager of the population ecology division at the Department of Fisheries and Oceans, said depending on what the sampling reveals, DFO may set up monitoring in the area.

But it doesn’t make much sense to look at whether there is a link between the fish kill and the dead whale until the sampling is complete, he said.

Smedbol said if the habitat on the ocean floor looks to be in good health, officials would likely rule out any local environmental issue, and it would be unlikely the whale death is related to the fish kill.

But if the sampling reveals a general die-off in the sub-tidal area, then it might make sense to look at whether there is a connection, he said.

Smedbol said the juvenile whale has likely been dead for “some time” — perhaps weeks. He said photos suggest there has been decomposition of the whale’s interior organs and tissues.

The department hasn’t decided whether a necropsy will be done. Smedbol said there are only a few people in North America who have the expertise to perform the procedure on a large whale, and given its decomposed state, a necropsy may not provide a lot of information.

“If it was blunt force trauma, we would probably be able to determine that. But if it was an illness or toxins… it would be very difficult to draw definitive conclusions on those causes of death,” said Smedbol. “So the department will have to weigh the options.”