'What a run, Raptors.' Fans give thanks for playoff run 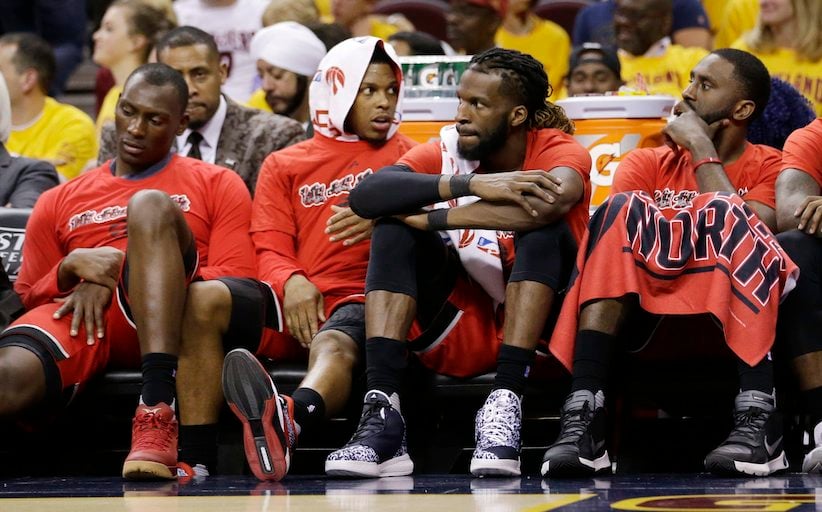 Toronto Raptors’ Bismack Biyombo, Kyle Lowry, DeMarre Carroll and Patrick Patterson, from left, sit on bench during the second half against the Cleveland Cavaliers in Game 2 of the NBA basketball Eastern Conference finals Thursday, May 19, 2016, in Cleveland. The Cavaliers won 108-89. (AP Photo/Tony Dejak)

What other fan base gives their team a standing ovation after a 26 point loss in an elimination game? #WeTheNorth pic.twitter.com/VP7JFXDfmw

TORONTO — From the prime minister to rapper Drake, We the North gave thanks to the Toronto Raptors’ playoff run.

“What a run, Raptors. You gave it everything and made us proud. #WeTheNorth,” tweeted Prime Minister Justin Trudeau.

Drake, via Instagram, paid tribute to both the Raptors and the Cleveland Cavaliers, who eliminated Toronto 113-87 in Game 6 of the Eastern Conference finals.

“Historic season! Proud to stand behind my city always!” wrote Drake, who was at Friday night’s deciding game. “Thank you to all the guys for giving us hope and purpose! Congrats to King (LeBron James) and the Cavs on making it to the finals and thank you to the Toronto Raptors for having me be part of this moment!!!”

Congratulations on an incredible season, @Raptors. You made Toronto & Canada proud to call you our own. #WeTheNorth pic.twitter.com/CvBgPsdqa1

“Congratulations on an incredible season, Raptors. You made Toronto & Canada proud to call you our own. #WeTheNorth,” tweeted the Toronto Maple Leafs, who share ownership with the NBA team.

“Proud of our Raptors. Incredible season with many accomplishments. Best is yet to come. #WeTheNorth #RTZ,” echoed Toronto Mayor John Tory.

Thank you, @Raptors. You made our city proud this season. #WeTheNorth

The Raptors played 20 post-season contests and came within two games of reaching the NBA finals.