A B.C. filmmaker took the provincial government to court over the existence of Bigfoot. Here's why the province's superior trial court dismissed his lawsuit 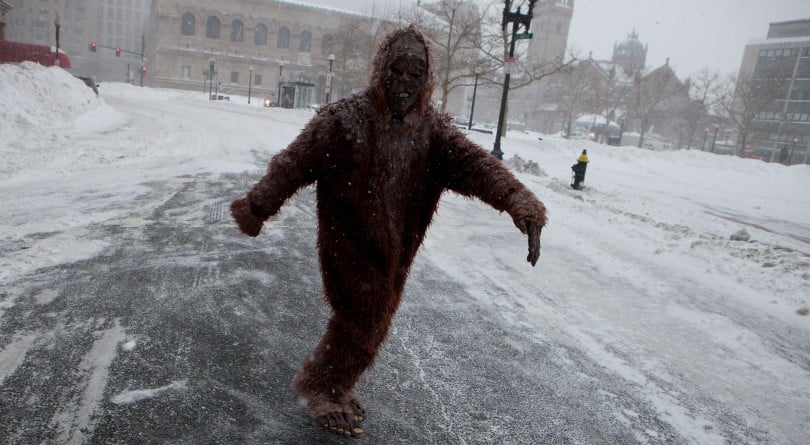 A pedestrian dressed as 'Bigfoot' makes their way through the strong wind and snow in the Back Bay neighbourhood during a blizzard on January 27, 2015 in Boston, Massachusetts. (Kayana Szymczak/Getty Images)

On Aug. 31, the B.C. Supreme Court ruled on the case of Standing v. British Columbia (Minister of Forests, Lands and Natural Resources). It doesn’t sound like anything particularly momentous, but it was, in fact—being that it did, after all, enter a Canadian court’s view of the existence of sasquatch into the legal record.

Todd Standing, the plaintiff, claimed that the B.C. government was infringing on his Charter rights in ignoring his claims that he, a filmmaker from Golden, B.C., had seen the creature, and added that the ministry specifically was failing citizens by failing to protect the sasquatch, a mythical North American ape-like creature that has long fascinated folklorists and the conspiracy-minded. He also sought a government statement that “Sasquatch is a hominoid or primate (Giganto Horridus Hominoid and/or Gigantopithecus) type of species, also known as a bigfoot, and is an indigenous mammal living within British Columbia” as part of his lawsuit.

The B.C. government’s lawyer said, in response, that “the plaintiff’s claim in this case is based on assumptions and speculation, lacks an air of reality, and the alleged statements of fact are ultimately incapable of proof.” (The statements of fact, it should be said clearly here, is that sasquatch is real.)

Seventeen days after the case was heard, Justice Kenneth Ball delivered his ruling, excerpted below, which sided with the government in a ruling that touched on a case against big tobacco, the meaning of belief systems, why courts should not be a body that decides “alleged scientific facts which are not universally accepted as true”—and, of course, what it means to believe that sasquatch was real. “The facts pleaded by the plaintiff disclose no infringement of any legal rights. Without infringement of a right, declaratory relief as sought by the plaintiff is not available; he has no legal standing to bring such a claim.”

In that ruling, Ball began by saying that the court is not a body meant to decide on “alleged scientific facts which are not universally accepted as true”:

Ball said that Standing’s claim that he wasn’t able to “fully impart information and ideas as to specific locations where sasquatch sightings occur … to protect the species from being killed” didn’t hold water, as the government’s lack of sasquatch action didn’t stop him from letting the government in on those hot details, or stop him from expressing his thoughts, beliefs, or opinions:

Not revealing “specific locations where sasquatch sightings occur” is the decision of the plaintiff, and in no way infringes upon his ability to espouse his beliefs regarding sasquatch existence. On the facts pleaded, there is no indication how the Province’s action — or lack of action — restricts the plaintiff’s freedom of expression.

As for Standing experiencing Charter-violating punishment at the hands of the provincial government? Ball found the claim baseless:

In the case at bar, there is no overt exercise of provincial control over the plaintiff; inaction — in the sense of the Province not recognizing the existence of the sasquatch — is by no means an exertion of control over the plaintiff on the facts of this case. The plaintiff has not been prohibited by the Province from sharing his beliefs regarding the existence of the sasquatch, or from any other action. No facts have been pleaded that amount to “treatment” as described in Rodgriguez (sic), let alone “punishment” that would outrage standards of decency. Rather, bare assertions of a violation are made without reference to any prohibition or act of control.

And the judge’s ruling cast aside Standing’s argument that he’s experienced discrimination because of his “political or other belief:

The conclusion that state action has not created a distinction as against the plaintiff is sufficient to be the end of the matter. However, I further do not find “political or other beliefs” as pleaded to constitute analogous grounds of distinction on consideration of the facts of this particular case. … A belief in the existence of the sasquatch is not an immutable personal characteristic. First, there is no political belief at issue here; Mr. Standing’s belief in the sasquatch’s existence is not a political matter. Second, such belief is not akin to “constructively immutable” grounds like religion. Where religion can be an element core to a person’s state of being in all aspects of life, the same cannot be said of a belief in the existence of the sasquatch.

In short: despite his allegations, the province’s trial court has ruled that Todd Standing was not, in the end, bigfooted by the government of British Columbia. The case, after all, has been sas-quashed.