What can we learn from the worst fires in Canadian history?

Although firefighting methods have been revolutionized in recent decades, communities may still underestimate what could be coming 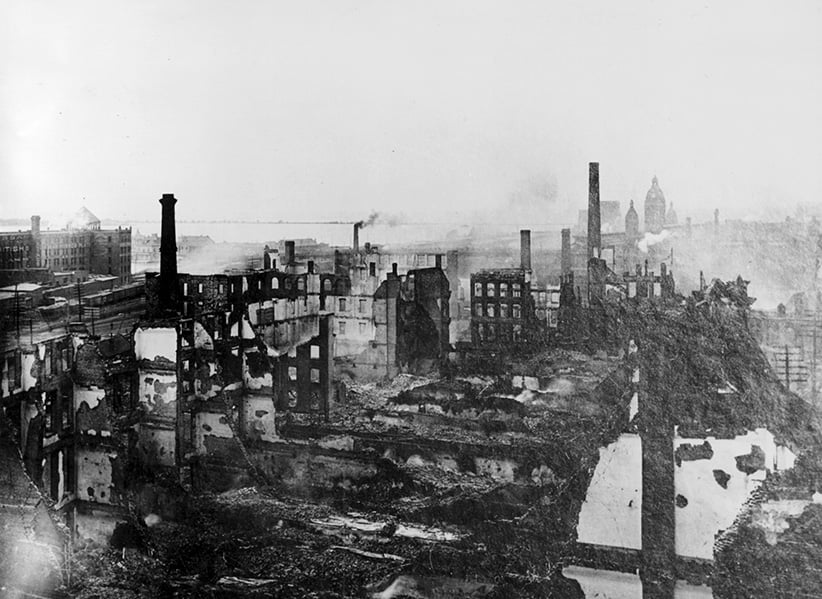 Aftermath of the great fire of 1904 which burned through the night of April 19 in downtown Toronto. About 100 buildings and 220 businesses were gutted, leaving a smoking, 7.9-hectare scar. In a city of 219,000 people, 6,000 jobs were lost. The damage was estimated at $11-million but miraculously, no one was killed. (Alexander Galbraith/Galbraith Collection/CP)

Oct. 7, 1825. Miramichi, N.B. The fall was warm, the harvest bountiful, when the north of town began to burn. Locals assumed the clouds were part of a rainstorm. When they noticed flames, they dashed for the Miramichi River, in which they stood up to their necks for eight hours. More than 200 people died. Such was the first major forest fire recorded in Canadian history.

The 2016 fire in Fort McMurray set records in terms of insurance and damage costs, and its magnitude and response can be put into context by examining the past. The fires burned 589,552 hectares and cost $9.9 billion. While destructive, the fires fortunately did not result in any direct casualties; the largest in Canadian history—the Great Fire of 1919 in Saskatchewan and Alberta—spanned 2.8 million hectares, while the Matheson Fires in 1916 Ontario killed 244 people and destroyed 49 towns.

History can teach us to better understand fire—and these are lessons we’re going to need. In the last century, the largest three per cent of fires accounted for 97 per cent of the total area burned, and the vast majority were ignited by lightning. Although the fires of today kill fewer people, it is a result of better firefighting rather than smaller fires. “We’re facing increasingly intense fires,” says Peter Murphy, a retired professor of forest fire management at the University of Alberta. “They burn hotter, move faster and take more space.”

Before fire alarms, municipalities would ring church bells to alert people to evacuate, or a “runner” would dash through the town with a rattle. By the time the Great Toronto Fire struck in 1904, putting 5,000 people out of work and levelling an area equivalent of 24 Central Parks, the city had established a fire department. Firefighters wore hot leather helmets and rode horse-drawn carriages, equipped with coiled hoses and ladders, which were raised by a hand crank. Before modern fire extinguishers, diligent homeowners were equipped with beakers full of chemical retardants to throw at the fire, known as “glass grenades.”

On a day dubbed “Black Tuesday” in 1911, 73 people died during a forest fire that burned from Michigan through southern Ontario. The province saw its deadliest flames four years later with the Matheson Fires, shortly before the Great Fire of 1919 scorched near Fort McMurray. Two decades later, a fire in 1936 in southern Alberta spread nearly 8,000 hectares (about one-eighth the area of Edmonton). “It was analogous to the conditions in Fort McMurray now,” says Murphy. “It really marked the start of Alberta forest protection.”

In the wake of these infernos, fire brigades were strengthened across the country, and during the Second World War, hundreds of Canadians volunteered overseas to fight fires in England. Most important, they introduced air personnel specifically for fire detection. “If you’re going to attack fires,” says Murphy, “you have to do it when they’re small.” Equipment improved in time to respond to the Manitoba fires of 1989, which led 24,500 people to be evacuated from 32 communities and cost $65 million. It led to new emergency plans in 15 communities.

Also in the 1980s, Canada developed a rating system to determine the likelihood of fires in certain areas of forest, and the index was adopted by countries including Portugal, Australia, the U.S. and Fiji. “We are refining our tools to better forecast the fire danger risk,” says Yan Boulanger, a forest ecologist with Natural Resources Canada. However, fire analysts still don’t have a system to rank fires once they occur. “There’s no severity index yet,” says Boulanger.

Prior to this blaze in Fort McMurray, the 21st century’s most famous Canadian fire broke out in Slave Lake, Alta., in May 2011. The town’s 7,000 people had to evacuate, and the town suffered $750 million in damages. Looking to the future, Boulanger points to statistics that show the area burned each year has increased since the 1970s. Rising temperatures bode for worse conditions. “According to the most aggressive climate scenario,” says Boulanger, “we can talk about as much as two or four times as much fire [in 2100] as right now.”

Although firefighting methods have been revolutionized in recent decades, communities may still underestimate what could be coming. “You’d be impressed with the sophistication of the departments,” says Murphy, “but it’s just astonishing how [fires] can burn. We’re chasing a moving target … we’re ready for fires of the past, but we don’t seem to be ready for the fires of the future.”