What do conservative Muslims and the Hells Angels have in common?

A short history of government attempts to legislate clothing 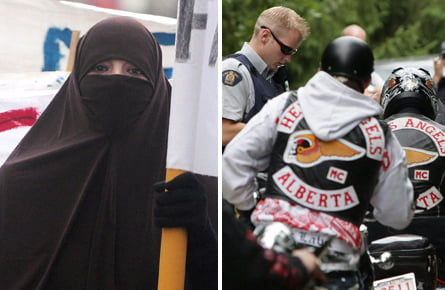 One is a brash and well-entrenched criminal organization with a notorious penchant for dealing in violence, drugs, and women. The other is a strict, dogmatic community with an almost singular focus on rules and traditions. What brings them together, though, is the unusual attention provincial governments in Canada have come to pay to the appearance of each group’s members.

Before Quebec announced the details of Bill 94, which allows provincial government workers to turn away niqab-clad Muslim women who refuse to remove their head-to-toe veils, members of the Hells Angels (and, more broadly, members of other criminal organizations) were the last ones to be targeted by a government-imposed clothing ban. However, if the experiment in banning bikers from showing their affiliations in bars in Saskatchewan and Manitoba is any indication, Quebec could have a hard time justifying banning Muslim garb from government offices.

Both Manitoba and Saskatchewan have laws in place that forbid patrons from displaying “gang colours” in licensed establishments. In Manitoba, settling down at a local watering hole with, say, a Hells Angels patch on the back of your jacket could set you back as much as $5,000 and net you three months in jail. The penalties are even steeper in Saskatchewan, where the law provides for penalties of up to a year in jail and a $10,000 fine. But even though keeping biker gangs out of bars may be a laudable goal, it’s not clear whether the rules are even enforceable.

A ruling late last year in a Saskatchewan Provincial Court suggests they’re not. In a case fought in Saskatoon last December, Jesse Leigh Bitz didn’t deny being a member of the Hells Angels, nor did he deny showing up to a local bar wearing the gang’s colours. Rather, Bitz’s lawyer, Mark Brayford, argued the law’s scope was too broad and could hamper political speech. “Gang colours,” Brayford says, “was so loosely defined that it could affect university students with a Che Guevara t-shirt on.” The judge agreed, ruling “the benefits of the legislation, in its present form, are minimal while the deleterious effects on freedom of expressions are so far reaching as to outweigh the benefits.”

Saskatchewan declined to appeal the case and has since gone back to the drawing board. Rather than forget about the project altogether, according to a spokesperson for the Ministry of Corrections, Public Safety and Policing, the provincial government will take another run at banning biker clothes from bars before the end of the month. Meanwhile, the ban in Manitoba remains in effect, though both Brayford and a police officer who testified in the Bitz case say the law is so flawed police no longer even try to enforce it.

At the other end of the spectrum lies the Gwen Jacobs case. On a hot summer day in 1991, Jacobs decided to walk around Guelph Ontario with her breasts exposed and was charged with indecent exposure as a result. By 1996, however, Jacobs had successfully fought the charges, arguing any law banning female toplessness while granting men the privilege unduly discriminated against women, and toplessness is no longer covered by the ban on public nudity.

In the context of Quebec’s ban on niqabs, the Jacobs case is perhaps the most ironic bit of jurisprudence. Having already handicapped the state’s powers in determining how little women can wear in public, Canada’s courts will no doubt soon be asked to weigh into whether it can impose caps on how much they’re allowed to.