What happens if the MMIWG inquiry misses its 2018 deadline?

The MMIWG inquiry will likely miss the November 2018 deadline for its final report, faced with the same challenges as similar investigations 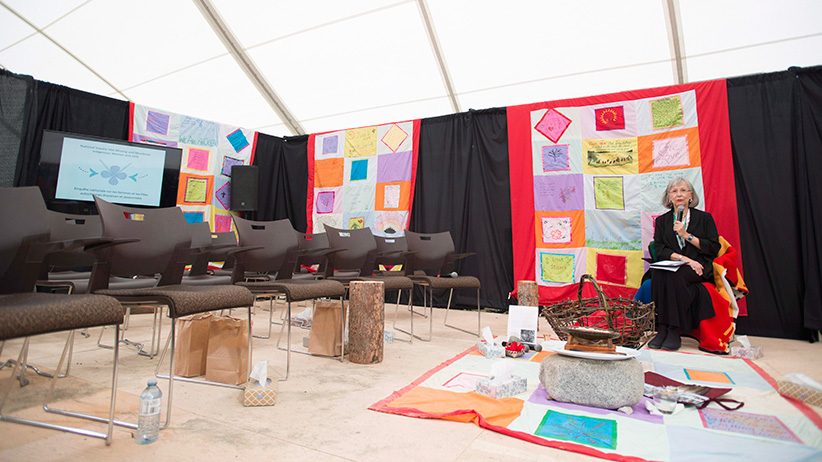 In March 2017, Six Nations of the Grand River in Ontario hosted a family gathering for families of missing and murdered Indigenous women and girls (MMIWG). Inside a community centre, dozens of family members from across the country sat in a circle, sharing ceremony and stories of lost loved ones for three days. But the healing process for some was disrupted when two commissioners from the national inquiry into MMIWG, which was scheduled to begin hearings the next month, unexpectedly arrived to offer support. A handful of mothers and fathers left the room in tears or anger, frustrated with the inquiry’s slow start. Others, more hopeful, welcomed them. It was an indication of both the mixed attitudes toward the inquiry and a forewarning of things to come.

This was before the resignations of several key staff members—plus one commissioner—and calls for Chief Commissioner Marion Buller to step down. It was before calls for the inquiry be stopped and reset—in the same way the Truth and Reconciliation Commission was in June of 2009. Indeed, it was before the national inquiry lost the trust of many of the Indigenous families, advocates and leaders who lobbied for this process for years.

Now, the commission’s deadline is approaching. It must submit its ﬁnal report on Nov. 1, 2018, to meet its roughly two-year mandate. But Buller, who declined to speak with Maclean’s, has said the national inquiry may request an extension. This option is looking more and more inevitable. Hearings in communities across the country have experienced months-long delays. More than 1,000 families have registered to share their stories with inquiry; those that do complain their testimony is cut short. The inquiry estimated that by April 1, 2018, it will have spent 75 per cent of its $53-million budget, according to a progress brieﬁng this September. Critics, some of whom include former staffers, have already written off the national inquiry as inevitably doomed to fail. In July, the Ontario Native Women’s Association pulled out of the inquiry, citing concerns over its limited format and an approach that Indigenous leaders and advocates have regarded as “colonial.”

READ: Inside the meltdown of Canada’s MMIW inquiry

These challenges might seem unique to this particular endeavour. But the heads of past inquiries say the challenge of examining complex social and political issues in a high-proﬁle public forum has never been easy. Perhaps the closest precedent for the MMIW inquiry was B.C.’s own provincial inquiry into missing women held between 2010 and 2012, which examined disappearances of women from Vancouver’s Downtown Eastside. Wally Oppal, the commissioner of that inquiry, has even spoken with those working on MMIW to offer encouraging words, noting that the work they’re doing comes under difﬁcult circumstances. “This inquiry is looking at issues that go back well over 100 years—the abuse of women, the abuse of Indigenous people. The distrust that Indigenous people have with our present justice system is well justiﬁed,” he says.

Oppal’s inquiry faced similar challenges to those currently being experienced by the MMIWG inquiry. It, too, saw staff resignations, witnesses pulling out of proceedings and lengthy delays. Hearings started a year after the inquiry was launched and an 11-month extension was later granted. Oppal, a former judge, says that both his inquiry and the one today were given “unrealistic expectations” that could never satisfy the needs of the public. “We’re looking at things that have taken place over many years, so we’re not going to get to any overnight solutions,” he says.

Public inquiries of all types have become mired in unreasonable expectations and sprawling mandates. “There is always a problem with meeting the deadline,” said John Gomery, the sole commissioner for the 2004 inquiry into the Liberal sponsorship scandal. “The extent of the inquiry is poorly understood in the beginning. When the inquiry starts, it’s only after you’ve made your list of witnesses that you realize how much there is to do.”

WATCH: MMIW: Families walk to inquiry hearing on the Highway of Tears

The Gomery Commission found that about $100 million had been allocated to advertising and communications ﬁrms in Quebec as part of the Liberals’ sponsorship program—but was diverted back into the party’s pockets. Paul Martin, who had taken over prime ministerial duties from scandal-ridden Jean Chrétien, tasked the retired judge with the inquiry, promising a federal election when it concluded. “That put me, as commissioner, in the uncomfortable position of knowing that I was going to be determining the date of the next election,” Gomery says. “That seemed to me to be a heavy burden.”

Unlike the MMIWG inquiry, the Gomery Commission had no deadline. Instead, Gomery says, there was a self-imposed time frame of two years to determine what had happened and how to prevent it from happening again. Gomery notes it took six months of organizing before his commission could start hearing witness testimonies. “A commissioner starts with nothing but a piece of paper,” Gomery says. When it comes to the national inquiry into MMIWG, or any public process that struggles to meet its deadline, Gomery remains sympathetic. “Like any other citizen, I’m disappointed to see that,” he says. “You wonder if there are legitimate reasons for the delay and for the slowness, and very often there are.”

For Dennis O’Connor, who conducted inquiries into the deportation of Maher Arar to Syria and contaminated drinking water in Walkerton, Ont., the pressure of trying to get it done as quickly as possible, along with added red tape, was the greatest hurdle. In speaking with Maclean’s, O’Connor, the former associate chief justice of Ontario, did not want to comment on the national inquiry into MMIWG directly, instead choosing to discuss his own experience with the federal process. “We did it as quickly as we could,” O’Connor says, noting that neither of the inquiries he conducted had deadlines imposed by the government.

The experience of the MMIWG inquiry has also been compared to the sluggish ﬁrst-year of the Truth and Reconciliation Commission. In 2008, when the TRC was ﬁrst established with the mandate to examine the residential school system, conflict between the commissioners stalled—and nearly derailed—the project. A year later, in 2009, Anishinaabe judge (now Senator) Murray Sinclair was summoned to replace Harry LaForme as the new chair. Under Sinclair’s leadership, the TRC changed. He moved the commission’s headquarters from Ottawa to Winnipeg and sent the the original government team back to what was then called the department of “Indian Affairs.” He undertook legal action to obtain archival records. After earning the trust of residential school survivors, the commission heard testimony from more than 7,000 individuals. The reset allowed for new commissioners and a new start; thus far Buller has stressed she wouldn’t do the same.

Former commissioner Marilyn Poitras, who resigned this summer, doesn’t think it will matter whether or not the MMIWG inquiry meets its deadline in 2018 or receives more time to ﬁnish the job. “I am not optimistic that the report produced by the commission will bring the change that anybody hopes it will bring,” Poitras says. She left her position after believing the inquiry was heading toward a “colonial place”—excluding the likes of elders and women in prisons, shelters and young girls in foster care.

The success of this inquiry, she says, has already been established: that it exists at all. For Poitras, despite its shortfalls, the very existence of the inquiry has brought the world’s attention to the plight of Indigenous women and families. It’s a small victory, but she feels the ﬁnal report will not bring about any further change. “It’s not stopping Indigenous women from being trafﬁcked or pimped out. It’s not stopping the complete leak of children out of our communities,” she says. “It’s not stopping our women from being murdered.”

MORE ABOUT THE MISSING AND MURDERED INDIGENOUS WOMEN INQUIRY