What is the best way to teach math? 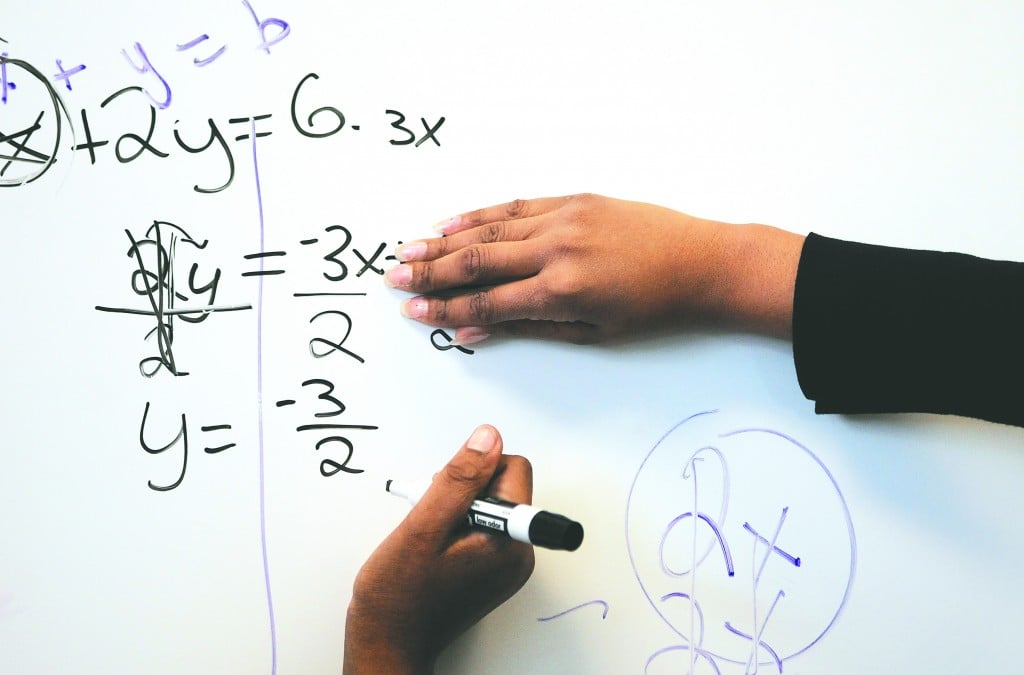 The discussions are emotional, heated and they don’t agree on much — except that Canadian kids are falling behind their peers in other countries, and there’s no clear solution.

There are generally two camps: those in favour of the old-school method to lecture kids with a “drill-and-kill” format that preaches practice, and another, ever-growing group that believes a more creative approach is needed to engage students.

At a recent event in Toronto, dozens of teachers waited in line to take selfies with math-teaching celebrity Dan Meyer, delaying his keynote talk at the Ontario Association for Mathematics Education conference. He is part of the new-school camp.

His approach is simple, Meyer says on the phone from California, where he’s a math education researcher at Stanford University.

He presents a problem at the start of class, and lets the students try to figure it out. Hopefully, he says, the students will struggle.

“That initial moment of struggle prepares them for what they’ll learn later,” he says.

Meyer cites several studies that back up his ideas, including one from Manu Kapur, a professor at Nanyang Technological University in Singapore. Kapur’s study shows students who are given a problem to solve on their own — before instruction from a teacher — outperform students who are given the traditional lecturing style.

The technique is in the early stages of implementation across Ontario, according to Sheena Agius, a math coach who helps teachers with the new method in the Dufferin-Peel Catholic District School Board.

Just like all other boards in Ontario, it is moving away from rote learning to try to get students to understand math at a deeper, more conceptual level.

“Just because we’re doing it, doesn’t mean we’re doing it well yet,” she says. “But it’s a learning process for teachers and that will come.”

Meyer has many acolytes, such as Paul Alves, president of the Ontario Association for Mathematics Education and a high school math teacher at Fletcher’s Meadow Secondary School in Brampton, Ont., northwest of Toronto.

“Teachers are really engaged by the way (Meyer) teaches math because when they try it they see the same thing _ the excitement students have to do the math — and it changes the classroom. It invigorates it and energizes it, which wasn’t the case before,” Alves says.

That engagement is priceless, Alves says.

He says a teacher at another school dove headfirst into the new-school method for his Grade 9 applied math class. The class, he says, jumped from 40 per cent on the provincial tests using the old method to 70 per cent after implementing the new one.

Yet both Meyer and Alves say they aren’t advocating abandoning the classic “chalk-and-talk” style.

“At some point I need to know that kids can factor a quadratic equation, and sometimes you have to practise that skill to get good at it,” Alves says.

On the other side of the dividing line, old-school math teachers are just as vociferous.

Anna Stokke, a math professor at the University of Winnipeg, is a staunch defender of lecturing and practice.

She recently published a report with the C.D. Howe Institute that showed Canadian students’ math performance in international exams declined between 2003 and 2012.

Stokke blames the decline on the style promoted by Meyer, which she dubs “discovery-based learning.”

“A direct method is a more effective way to teach,” she says.

“So guys like Dan Meyer will say, ‘We’re going to spend the next week building a birdhouse and you’ll need to use measurements to figure out dimensions,’ and the kids will learn about area and volume and all that. Then a week goes by and what have you learned? How to build a birdhouse.”

“The best teaching is some shade of grey, where before the teacher talks about what to do, the teacher gives students some reason to care and some background on how to care,” he says.

“None of this suggests teachers shouldn’t explain or lecture.”

Stokke does offer Meyer and his disciples an olive branch in her report, saying 20 per cent of math teaching time can be used for these “alternative methods.”

“I’m trying to be objective and I don’t want to tell teachers they can’t use a particular method at all, but I want to be clear on which methods have been shown to work and which haven’t.”

Having said all that, Stokke admits that her research can’t conclusively pinpoint discovery-based learning as the reason for Canada’s faltering math scores.

Her research reinforces an assessment by the Organization for Economic Co-operation and Development in 2012, where 65 countries took part in the Program of International Student Assessment that examined math skills of 15-year-olds. Canada fell in those scores as well.

Her report found every province declined in math scores except for Quebec.

Annie Savard, a math education professor at McGill University, said her research indicates the difference may be rooted in training.

In Quebec, students go to teachers’ college for four years, as opposed to a one-year program that follows a bachelor’s degree in the rest of the country. Ontario is set to move to two years in the fall.

Cathy Bruce, a math education professor at Trent University, is tired of the so-called “math wars.”

“It takes away from figuring out what is happening to Canadian students. The solution is likely somewhere in the middle.”