What does it take to fight a fire like the one in Fort McMurray?

A Q&A with a firefighter who battled the Slave Lake wildfire in 2011, on what firefighters in Fort McMurray are facing now 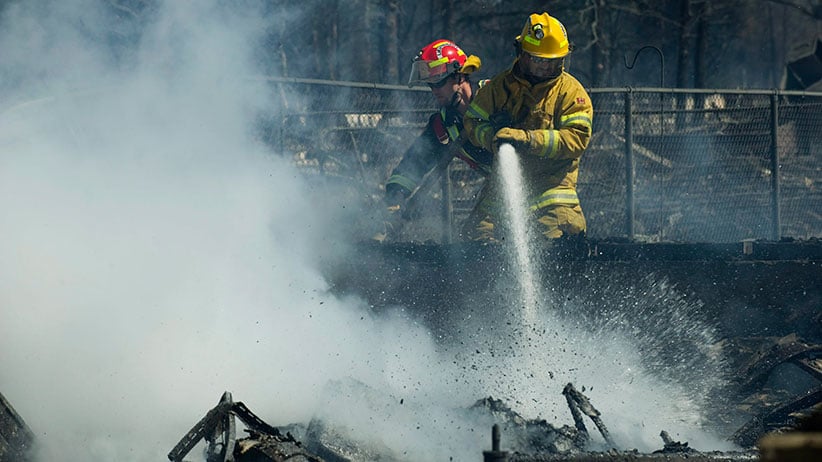 Firefighters work on the smouldering remains of houses in Slave Lake, Alta., on Monday, May 16, 2011. Whole neighbourhoods were flattened by firestorm that swept through the town of 7,000 destroying upwards of 40 per cent of the buildings. (Ian Jackson/CP)

An emergency call comes in, either from 911 dispatchers or from a civilian who has called the fire department itself or a provincial forestry department. Alex Pavcek, deputy chief of the Lesser Slave Lake Fire Department in Slave Lake, Alta., a community that was ravaged by wildfire in 2011, explains what happens next.

A. The dispatcher would page out the duty officer and let us know they have a wildfire. All our firefighters carry pagers—you wear it on your hip. At night, at two in the morning, we’ve got guys who could be here in two minutes. They have a green light in their windshield to alert people they’re responding to an emergency, but they’re not allowed to break the rules of the road. All the gear is in a locker and ready. The NFPA [National Fire Protection Association] standard is to have your gear on within a minute, so they can be climbing into a truck within the first minute of their arrival. It’s called ‘turnout gear.’ It’s a helmet, jacket, and the pants are rolled over the boots, and gloves.

Do you have a fireman’s pole?

If you ask all my men, they all want a fireman’s pole. They’re very common, especially in two-storey fire departments where the sleeping quarters are upstairs. The new thing now is slides. They’re safer.

How do you designate your crews?

We load up crews based on experience and the type of fire. You can’t just get in a fire truck and drive it. All they have to go on is the information from the phone call or text message. In [the caller’s] mind, it could be a large raging wildfire. In reality, it could be a small, contained grass fire. We throw everything at it we can. We’ll send every truck we have, every man, structural protection units. We’ll send every possible apparatus. It’s easier to call things back then to get them going when it’s too late.

What happens once you arrive at the wildfire?

A lot of forestry fighting is done by air. You have helicopters with water buckets, water bombers, [helicopters called] ducks, which skim off the lake. The minimum crew is four in a heli-attack. On the ground, it’s crews from four to 20—one guy on a hose, one guy on a shovel, one on an axe. The guys on the ground are going to come in from behind.

In wildfires, we have what’s called ‘working from the black.’ You fight from where it’s already burnt because the fire can’t burn itself again. [On the other hand,] in structural firefighting, you fight from the unburnt side to lessen the damage. You always try to push the fire back on itself.
The senior guy just takes a step back. He notices what’s around them. He watches the wind conditions. He’ll say, ‘the wind shifted. Let’s pull back.’ A lot of times, it’s by sight. We’ll rely on the guys in the air. They’re on the same radio channel. The guy in the back is going to cold-trail it so nothing is left behind.

What are the priorities in fighting a fire?

We base every call on the tactical priorities: life preservation—ours, the firemen, then yours, the public. Second is instant stabilization—putting the fire out or getting a victim out of the car. [The third priority is] property.

Where do you get the water?

The nearest, best water supply you can find. If that means setting up a pump at a pond, that’s what we do. A lake, pond, river, stream, wherever there’s water, we’re going to use it. The average length of the hose is 100 feet. We’ll bring as much as we need, up to thousands of feet. It’s called ‘forestry hose.’ It leaks itself – it’s called ‘weeping’ – so it keeps itself wet.

How far can a wildfire jump?

These fires can jump over highways, over rivers. In Fort McMurray, it jumped the Athabasca River yesterday. If that happens, it’s ‘get out, get away.’

How long will you fight a fire for?

Normally it’s a number of days—after 15 days in a row, there are rules about it. As an example, in the Slave Lake fire in 2011, the fire lasted three or four days, but then you want to [extinguish all] the threats.

They might do a fly-by with infrared cameras and temperature readings. They’ll walk the fire; they’ll drive the fire. We’ll call the fire ‘controlled’ or ‘out,’ then have to go back a few days later because someone saw some flames.

How does the Fort McMurray fire compare to others you’ve seen?

It’s probably going to be the biggest in Canadian history because of costs and insurance and damage. I’d say we’re making history right now.