What now, for those in Fort McMurray who've lost their homes?

What insurance policies will cover for those who lost it all in the Fort McMurray fire, and what to expect 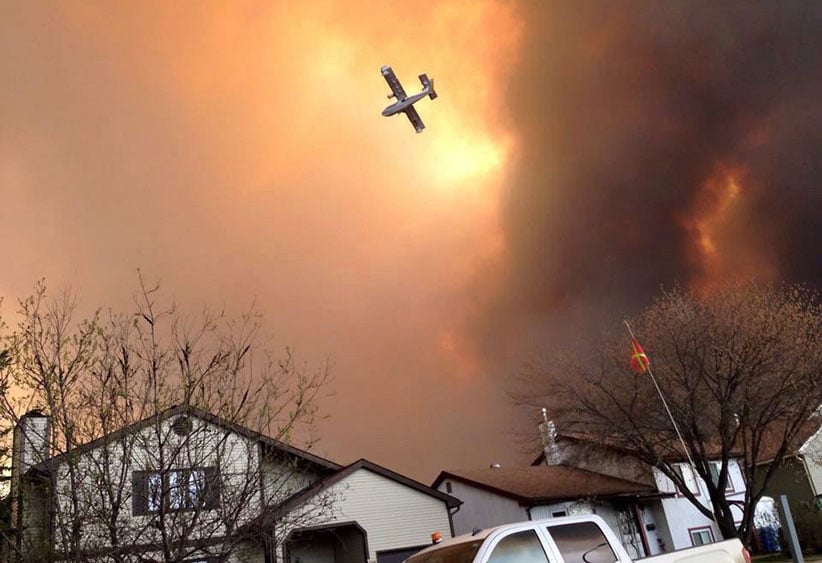 Smoke fills the air as a small plane flies overhead in Fort McMurray, Alberta on Tuesday May 3, 2016. Raging forest fires whipped up by shifting winds sliced through the middle of the remote oilsands hub city of Fort McMurray Tuesday, sending tens of thousands fleeing in both directions and prompting the evacuation of the entire city. (Kitty Cochrane/CP )

With Alberta officials reporting more than 1,600 properties destroyed in Fort McMurray, homeowners who discover their house—indeed their entire neighbourhood—has been burnt down will soon find themselves dealing with their insurance company. What level of coverage can they expect and what happens if they decide to move and rebuild elsewhere?

Those who suffer damage caused by fire can generally expect a payout from their insurer, according to the Insurance Bureau of Canada. If they’re unable to return home because of insurable damage may also be entitled to additional living expenses in the interim.

That’s in stark contrast to the experience of many Alberta homeowners who tried to make claims following the 2013 floods only to discover their policies didn’t include “overland” flooding. Why? The industry says it distributes the cost of paying claims across of thousands of policy-holders, but since most don’t live in flood-prone areas they are unwilling to pay higher premiums. Fire, on the other hand, is a much more common threat.

As for how much a Fort McMurray homeowner is eligible to receive if they opt to rebuild, IBC spokesperson Steve Kee says most policies offer “replacement cost” coverage up to certain limits, or “guaranteed replacement” cost coverage that includes any additional costs incurred beyond those limits. Most policies require a homeowner to rebuild on the same site, Kee adds. It’s important to note a home’s replacement cost isn’t the same as its market value, which also includes the value of the land it sits on. It only covers the costs of materials and construction.

If a homeowner chooses to sell his or her property and move, Kee says the coverage usually falls to actual cash value. This is the value of the dwelling—again, separate from the land—before it burnt down. Actual cash value takes into account depreciation, meaning the older the house, the less money the policy-holder is eligible to receive. There are, however, some insurers who will pay replacement costs for homeowners who decide not to rebuild.

Of course, the biggest question facing evacuated Fort McMurray homeowners today isn’t the fine print of their policy—but whether they will be unlucky enough to need it.