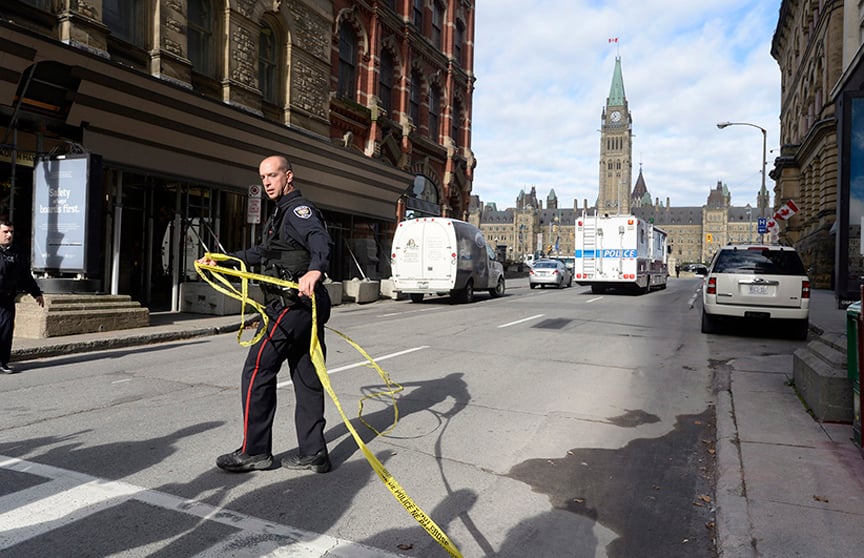 In the wake of this morning’s shootings in Ottawa—which took the life of a Canadian soldier and put Parliament Hill in lockdown—law enforcement and airports around the country have taken varied measures to beef up security in their own jurisdictions. At the Ontario legislature, where politicians observed a moment of silence for the slain soldier, Ontario Premier Kathleen Wynne vowed that question period would continue despite events in Ottawa. “There is fear and uncertainty about what has happened in Ottawa, but democracy will not be silenced,” she tweeted. David Hopkinson of the Toronto Police Service told Maclean’s the TPS is “exercising diligence and offering additional resources to security at the Ontario legislature. I can’t go into the operational plan,” he said.

Journalists on Twitter posted photos of the legislature from the outside, showing Toronto police cars lining the entrance to the building. At Toronto city hall, meanwhile, a spokesperson for Deputy Mayor Norm Kelly said “appropriate measures have been taken to ensure city hall is secure,” appropriate measures, possibly, in the form of a smattering of security guards. Globe and Mail reporter Ann Hui reported recently on Twitter that she “did a seven-minute walk of city hall and saw only two security guards. Visited all three main entrances, with only one guarded.” Conversely, according to the CBC, Montreal city hall has closed its doors to visitors, and the British Columbia legislature is under lockdown. Authorities have heightened security at Calgary’s city hall and municipal building, too, although citizens can still access city hall. The Quebec legislature has doubled security.

There seems to be relative calm at the Greater Toronto Airport Authority. The organization said it doesn’t believe, at this time, “that anything should change in terms of airport security.” The Authority is currently working with Transport Canada to monitor the situation. The same goes for Billy Bishop Toronto City Airport, and Union Station, both of which are keeping a watchful eye on events in Ottawa; Billy Bishop and Union Station say they will update their websites and Twitter feeds if their responses change. The TTC has stated it will heighten security and review current security practices. Some TTC patrons on Twitter are wondering whether the transit commission will add security guards to subway cars and streetcars. Brad Ross, Head of Communications for the TTC, says passengers “will see an increased presence of Toronto Police officers on the TTC.”  “It’s important to stress that there’s been no specific or credible threat made against the TTC,” he adds. “This is out of an abundance of caution that we are taking these steps.”

LIVE BLOG: Updates on the Ottawa shooting as details emerge

Ottawa shooting: Photos from the scene