What you need to know about tailings ponds

Understanding the tailings ponds breach at Mount Polley near Likely, B.C., which has emptied mine waste into waterways 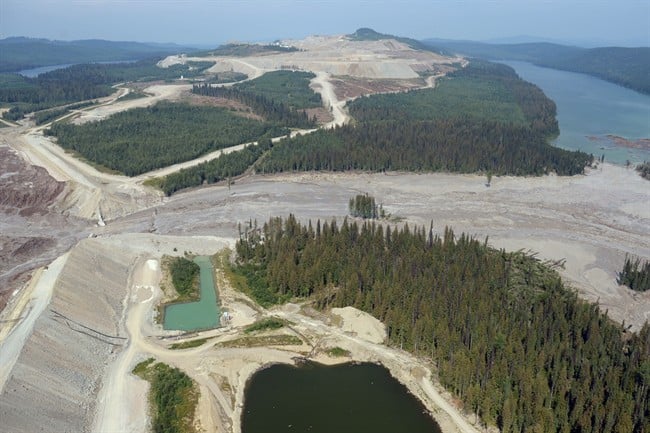 Damage from a tailings pond breach is seen near Likely, B.C. on Tuesday. A tailings pond that breached Monday, releasing a slurry of contaminated water and mine waste into several central British Columbia waterways, had been growing at an unsustainable rate, an environmental consultant says. (Jonathan Hayward/The Canadian Press)

On Monday, an Imperial Metals tailings pond in B.C. breached its embankment, spilling contaminated water and waste material into the surrounding waterways and spurring a state of emergency in the area. It’s raised the ire of First Nations groups, who say the company ignored a report that the growth of the pond was unsustainable. It’s angered environmental groups, furious at the suggestion that water with arsenic and mercury was released into the lakes. But what exactly are tailings ponds? Does the industry have an alternative? We talked to Scott Dunbar, the head of the University of British Columbia’s school of mining engineering, to explain the issues at play and the institutional attitudes that need to change so this doesn’t happen again.

Q: So what is a tailings pond, and how does it work?

When you take the rock out of the ground, you grind it up to particles about the size of sand and silt, then you run it through what they call a concentration plant and it separates the minerals of interest from the waste. The waste becomes tailings, and it gets mixed up with water, and it’s pumped out into this pond. The purpose of this pond, with an embankment around it, is to retain the tailings and allow them to drain as much as possible. It’s basically sand-sized particles, but there’s an awful lot of it that’s produced relative to the minerals that generate all that cash. This waste has to be dealt with. It’s mostly silicates. If the filtering is done well, which it usually is, there would be very few metallics.

The tailings pond is eventually drained and the tailings are disposed in a big stack of dry sand. The biggest problem with all this is water–I suspect that’s the problem here. You get rid of the water, it’s a lot easier to manage. And then the pond is eventually reclaimed; there’s some plant life that grows on top of it and other things done to it, too.

Q: Is there another way to handle the waste?

No, short of processing in situ–in other words, don’t move the rock in the first place, just process the rock right there. And that can’t be done for these copper and gold mines that are in operation, the minerals are just too tightly bound up in the rock mass, so you have to extract, crush and grind the rock. If you could do that—and this is really futuristic—with a swarm of small machines and not move the material on the ground, you could eliminate it. But otherwise, it’s a fact of life.

I wouldn’t say there’s a strong move in that direction. In situ mining and processing is done in some cases, uranium is one example, but not in others. I would have to say all of Canadian mining uses tailing ponds.

Q: What’s in the runoff?

In this particular case, I think the contamination is very dilute. The president said you could almost drink the water. Frankly, I’m more concerned about the tailings themselves. There are 15million cubic metres spread all over the countryside. That’s going to be a bigger problem. The water’s gone, and it was diluted considerably already, and I don’t think that’s going to be a problem. They’re going to have to go over all the area and look at individual parts and places and say, “Do we keep it here, or do we have to move it.” That’s going to be a long and tedious exercise.

It’s a case-by-case basis, every square kilometre will have to be looked at. It’ll depend on the site, and how close it is to the river. It doesn’t do fish habitat much good, because it covers up the river bottoms and all that. Maybe the system can tolerate that, but how much, I don’t know.

Q: What about the reports of arsenic and mercury in the water?

A: I don’t think those are going to be a problem. They’re dilute quantities—it is almost drinkable, and now that it’s dispersed into lakes, it’s even more diluted. I don’t think contamination is going to be a major issue here. The problem now is what will those tailings do. What’s in those tailings can be an issue, but as I understand it, there’s a lot of biological activity that had consumed most of the metals in the pond.

Q: The president of Imperial Metals has made headlines for claiming that you could “drink” the water. As early as 2012, former resources minister/current Finance Minister Joe Oliver called it a “fact” that we’re going to be able to drink from tailings ponds. And yet you see photos of the area that have been described as “like a lunar surface,” with muddied brown water. How do you reconcile those things?

Imperial Metals actually had an application in with the ministry to treat and release the tailings pond water, and it somehow got delayed. I don’t think I would drink it—it’s alkaline, it’s awfully salty. I think it’d be unpleasant to drink. I don’t think you’d keel over and die from drinking one glass, although continued exposure to it can’t be good for you. But the thing is that it was treatable and they were planning on releasing it—and that suggests it wasn’t that much of a problem to begin with. There are quantities of arsenic, but one issue that’s always concerning is selenium, and that’s good for you to a point until it’s bad for you, but even that’s at low levels. Still, as I said, I don’t think the water is the problem.

Q: How many tailings ponds are there in B.C.?

There’s 130-some mines in B.C., and every one has one. There might be a few bigger ones with a couple of disposable sites, but there aren’t many. On average, it’s one per mine.

Q: What about in Alberta?

A: That’s the oil sands, so they’re a little different. They have a large footprint. Most tailings ponds in B.C. are small.

Q: How long have tailings ponds been used in the industry?

A: Oh, since the beginning of time. The bigger ones started being built in the 1950s, I think.

Q: Is there any research being done on making tailings ponds better?

Q: It seems clear that this is going to really damage the reputation of the mining industry.

But this is not a one-time thing, no. I mean, these are rare events, but right now, there’s this separation of authority between the regulators and consultants that design these facilities. It really is an education issue. We need to get these groups together to work on the issue of managing the tailings instead of just dealing with their own individual issues. It is a long-term, 30-year management problem, and different people come and go. We don’t educate people to design tailings ponds; they learn by doing it. There’s no course in it at UBC that I know of. There may be lip service paid to it in geotechnical engineering because that’s the kind of people that do it, but other than that, there’s nothing other than on the graduate level.

Mining companies do outsource it, but operate it themselves, so there are all kinds of issues around that. The geotechs build it, and then walk away. The regulators come in, they only come in to regulate. These are long-term liabilities. We need to have more meetings of the minds.