Lightning may be a factor in the forest fires raging in Alberta, Saskatchewan and British Columbia, but the worst blazes are often man-made 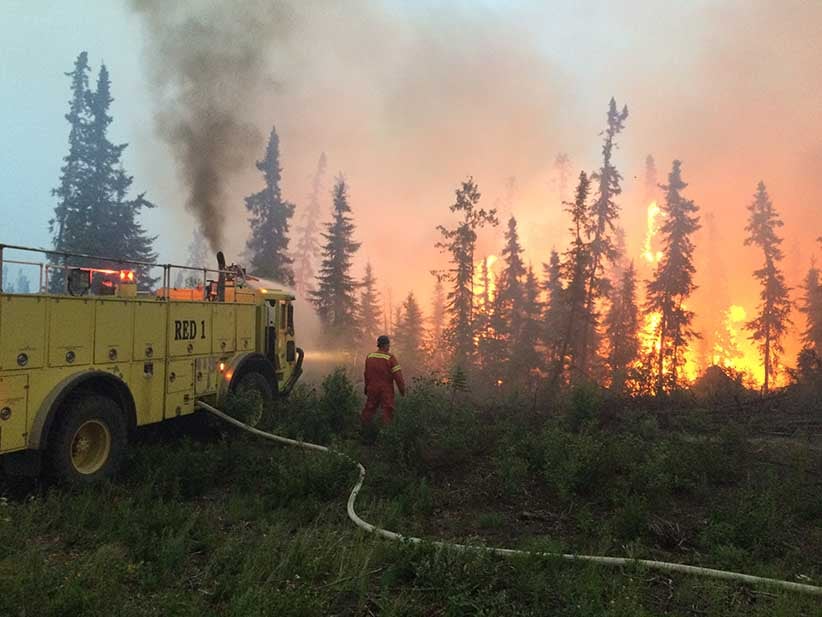 As hundreds of residents of La Ronge were being evacuated because forest fires threatened to lap up their homes, a cluster of six fires sparked the wilderness around Hall Lake, a nearby community. Its residents, too, had to flee by school bus and car.

While a helicopter and ground crews fought these new outbreaks in matchstick-dry northern Saskatchewan, the government announced their likely root: arson, all six of them. Authorities didn’t need this. Not on top of all the existing fiery hell.

It’s the summer of smoke throughout Western Canada. Wildfire officials reported more than 100 active wildfires in both Alberta and Saskatchewan last weekend. In British Columbia, more than 79 had exceeded 10 hectares of damage. Residents of Vancouver, Edmonton, Saskatoon and Regina have awoken to severe air-quality warnings, a smoke-obscured skyline and neighbourhoods that smell like a campsite the morning after. Canadian Forces soldiers flew in to help in Saskatchewan, as well as firefighter crews from as far away as New Zealand.

Most of the fires have been caused by lightning, nature’s way of regenerating forests. But we help out nature a lot.

Many of the worst blazes in recent history can be blamed on either human menace or carelessness. The Sechelt fire that gave Vancouver smoky air and a bloodshot sunset is suspected to be human-caused, but remains under investigation early this week. The 2011 inferno that destroyed much of the Alberta town of Slave Lake was blamed on arson. Investigators had pinpointed its starting spot, but couldn’t find enough evidence to charge anybody with the $700-million crime.

The Alberta government keeps and publishes astonishingly detailed data on wildfires—thousands of blazes going back nearly two decades, with their causes, locations, area burned, weather and more. This huge database shows that in the last decade, human causes were behind 43 per cent of all large wildfires—those that charred more than four hectares (roughly the size of four major-league baseball fields).

There were 1,039 of these large fires in Alberta between 2005 and 2014. The majority caused by lightning are easier to identify or predict, between advanced weather-tracking systems and investigators who find lightning-scarred trees at a fire’s epicentre, says Alberta wildfire investigator Theo Bailey. (Contrary to what you may assume, damage is often less fierce around the eye of a firestorm, making it easier to discover and seek clues at the point of origin, the investigator says. “It can be a couple of metres or smaller.”)

For the hundreds of human-caused large blazes, investigators use first responders’ photos, burn-pattern analysis and detective-style witness interviews. They have nearly all of them figured out. Only 38 of those 1,039 fires have causes remaining undetermined or under investigation. The data reveal much about modern firestarters. They’re actually seldom deliberate about it.

Fifty-one of the last decade’s large fires were labelled arson. Witness or firefighter accounts often point to the crime, but investigators also watch for other signs or patterns, Bailey says. “Multiple fires in a small area in the absence of lightning detection can be an indicator of an arson event.”

Wildfire gumshoes can determine the how, but the who can prove more elusive. The fire that ravaged Slave Lake is listed as “arson known,” but another 50 are “arson suspected.” There’s a long way between wildfire officials determining arson and prosecutors laying charges, Bailey says.

Generations who grew up under Smokey the Bear’s stern gaze may think the accidental wildfire problem starts and ends at campfires. (Drown it, stir it, drown it again, then see if it’s cool, kids!) Campers have caused, on average, 300 wildfires yearly in Alberta, but the vast majority damage only a few square metres. They’re often in well-used sites where others quickly spot and suppress them. In a decade, only six abandoned cooking fires by campers led to wildfires larger than four hectares. It could be a sign that the warnings from Smokey and Alberta rangers are helping.

Far more large ﬁres are caused by all-terrain vehicle users. Muddy clumps of moss or grass get stuck around exhaust pipes and ignite, leaving investigators to follow a trail or tire treads to the origin point. ATV use was initially labelled the cause of Alberta’s House River fire, which destroyed more than 248,000 hectares of boreal forest in 2002. The province’s “knock it off” campaign has long urged pleasure riders to remove debris buildup from the exhaust or engine parts.

The power line sector is at fault for nearly half of all industry-caused large wildfires. Wind is routinely the co-conspirator, felling trees that snap active cables. The oil and gas industry has caused a handful, including one that started with a vehicle near Shell’s Albian oil sands mine and damaged an area equal to six Toronto Zoos. After crews took two weeks getting that fire under control, a massive fire that had grown to the size of Prince Edward Island forced the evaluation of the oil sands’ operation—proving that in Alberta’s resource-rich north, extinguishing the nearby threat is no protection from the bigger blaze approaching.

Sometimes, wildfire management means prescribed burns to limit the risk of wildfire. Sometimes, this preventive medicine goes down the wrong way. On the eastern slopes of Banff National Park in 2009, a prescribed burn that got out of control took 25 days to contain, and scorched 720 hectares.

Many accidents of this type, too, start at home. Residential owners often cause large fires when they clear brush into a large pile in a corner of their property, torch it, but don’t fully extinguish it later. Even winter burning isn’t always safe and can ignite months later, Bailey says. “They think their burning is completed, and then once the snow melts, the winds pick up, you see some dry grass in the spring, and the hazard increases.”

Nine of the large wildfires were caused by children. The biggest began as an abandoned fire in May 2005, and burned 27 hectares at Little Red River Cree Nation.

As much as the western provinces’ firefighters and their considerable reinforcements help control the flames, the rain forecast this week seems likely to help lead the rescue efforts, so 13,000 northern Saskatchewan residents under evacuation can return home.
Some of the investigators’ work will continue long after the charred trees are soaked to safety, to learn from human mistakes and maybe bring arsonists to justice.

With nearly three times as many fires in Saskatchewan so far this year compared with last year, investigators, too, may need to call for backup.