What's killing the animals at the Calgary Zoo?

Seven penguins are dead in Calgary—the latest in a series of bizarre animal deaths over the last decade. Why does this keep happening? 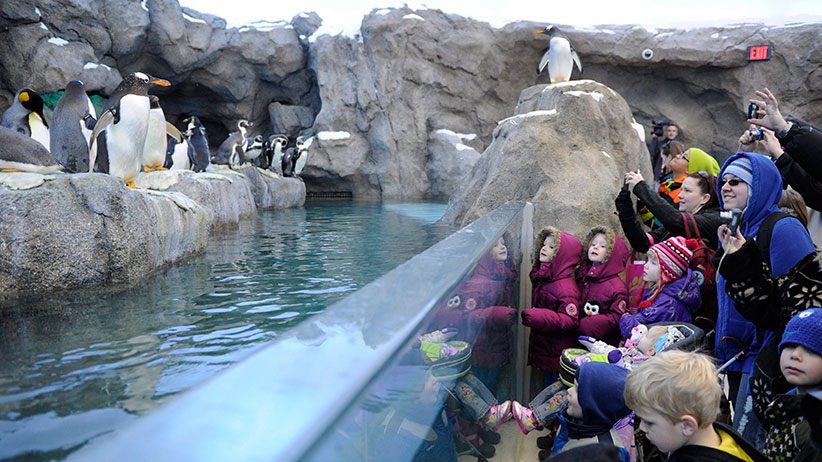 Adults and children check out penguins at the Calgary Zoo in Calgary, Alberta. (Larry MacDougal/CP)

In 2005, a spider-monkey died; it was let outside and got frostbite. In 2006, a colony of bats went down; their cage was too hot and humid. In 2007, a possum was crushed by a keeper’s foot. Then came the paralyzed hippo, the suffocating stingrays, and the gorilla that wielded a knife. Last winter, to the buzz of many headlines, an otter drowned, the instrument of death being a pair of pants. And this week, seven penguins were found at the bottom of their pool.

The Calgary Zoo has produced a decade of bizarre obituaries. Lest we forget the 85 tilapia fish, the four gorillas, the capybara and the goat that are among the establishment’s dead. Critics are blaming the zoo for negligence, while regulatory bodies agitate for change. However, the zoo maintains, still, that the perishing of the penguins was an isolated accident.

“It seems to be a one-off type of thing,” says Jamie Dorgan, director of animal care for the zoo. “I’m very confident with our animal care protocol, our animal treatment standards. I consider them to be some of the best in the world.”

Investigators don’t share his confidence. In 2010, the Canadian Association of Zoos and Aquariums, along with the equivalent American organization, published a review of the Calgary Zoo at the zoo’s request. The review found that, between 2000 and 2009, the annual number of deaths nearly doubled, from about 100 to about 200, which could not be explained by change in population size.

Mentioned in the review: 170 bats died over six years due to improper climate in their enclosures. In 2007, a hippo died after being transported from the Denver Zoo, as it had been lying down for so long that its circulation stopped. The following year, 45 stingrays suffered fatal oxygen deprivation, followed by a goat that got tangled in a rope, which acted as a noose. Casualties have continued to 2016; in February, an otter drowned because a keeper let it play in the water with a pair of pants, which dragged it down.

“We try to keep accidents as low as humanly possible,” says Dorgan, arguing the incidents are inevitable “when you have 1,000 beings managed by 100 other beings.” The zoo does appear to have a measure of bad luck; in 2009, two drunk 27-year-olds trespassed on the grounds and got mauled by a Siberian tiger (critics blamed the zoo’s fencing), and in 2014, the facilities flooded, indirectly killing a school of tilapia.

However, the reviewers identify an “underlying pattern” in the zoo’s record, naming keeper incompetence and disorganized workloads. “There appears to be a pattern of knowing there is a problem and known an ultimate solution, yet taking incremental steps to try different solutions,” the review reads.

Zookeepers are hired by the City of Calgary and protected by a union, which does not include the zoo’s director, Clement Lanthier. Although one zookeeper resigned after starving a corn snake to death, nobody was fired when a keeper left a knife inside the gorilla enclosure, which one gorilla picked up and pointed at another, or when a keeper crushed a capybara in a hydraulic door. Nothing changed in the otter exhibit after the trouser tragedy.

“The zoo’s really got to take a step back and be hyper-critical of themselves,” says Rob Laidlaw, director of Zoocheck Canada. “There have been very curious incidents at this zoo.” While Laidlaw criticizes the zoo for keeping penguins at all—“penguins are not great candidates for a zoo. They’re deep divers, hyperactive, extremely gregarious and live in colonies”—he hopes the incident will “make people realize that zoos aren’t necessarily the safest places for animals.”

The Calgary Zoo does not have a cemetery. Corpses are occasionally fed to predators, though the seven dead penguins are undergoing necropsies. After investigating the death, the zoo will hire a contractor to incinerate the bodies—a routine, by now. As Laidlaw says, “here we are again.”