When it comes to Syrian refugees, Canada is falling behind

Canada promised to resettle 1,300 Syrian refugees by the end of 2014. Rachel Browne speaks with three who have recently arrived in Toronto. 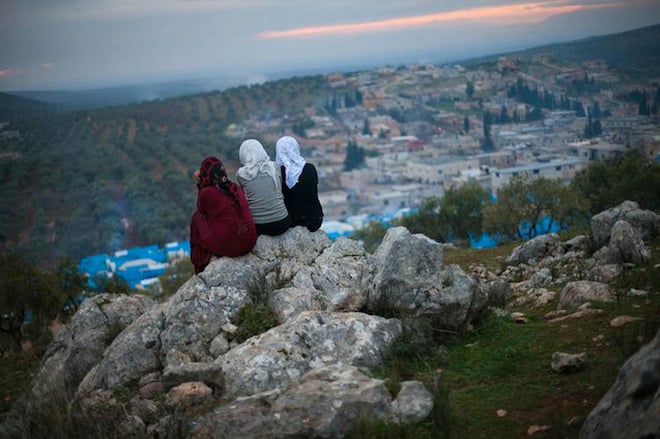 A few days after Christmas, Sarah looked in the mirror in the front hallway of the red-brick home in Toronto’s east end. She was trying on winter coats donated by the parishioners of St. Bartholomew’s Catholic church just down the road. The sleeves on a cream-coloured puffy jacket–with the tags still attached–drooped when she held up her arms. “It’s a little too big. Do you really think I will need this?” she asked Kenneth Fung, a retired psychiatrist who was hosting Sarah, 25, her brother Michael, 27, and their friend Ibrahim, 33. He reassured her winter was coming, and she would indeed be thankful for it soon enough.

The Toronto church—which has sponsored eight refugees from Iraq and Syria since 2007—is part of a network of more than 160 Catholic parishes that support the Office for Refugees at the Archdiocese of Toronto (ORAT), the most active refugee pipeline to Canada. Since the group was founded in 2009, it has brought in more than 2,000 refugee families from conflict zones around the world.

ORAT has resettled 114 Syrian refugees this year, but Martin Mark, the group’s director, says they could have easily doubled that number if not for the government’s processing delay, which crippled his work for most of the year. Because Immigration didn’t release the quota for private sponsors until several months after his group expected it, Martin says he wasn’t able to start bringing Syrians in until much later than expected. “It’s devastating. We have so many people willing to sponsor refugees and do the resettlement work. It’s been very difficult to work like this,” he said.

The Immigration Minister has yet to explain the delay. Martin is concerned about ORAT’s unprocessed applications for 2014, some of which he says he will have to resubmit in 2015. “It’s so defeating. These people need hope, not bureaucracy,” he said. He’s expecting similar delays and disappointments in 2015, but says it won’t break his motivation. On Jan. 7, the Canadian government announced they would resettle another 10,000 Syrian refugees over the next three years.

Sarah, Michael, and Ibrahim prefer to use English nicknames for fear that family members, who are still in Syria, may be in danger if their names are revealed. As often as the church will let him, Fung–a Chinese-Trinidadian who immigrated to Canada in 1972–gets up in front of the congregation and asks everyone to donate a toonie to the cause. The cost of privately sponsoring a refugee for one year is around $15,000.

In 2013, Immigration Canada promised to admit 1,300 of the estimated 3.3 million Syrian refugees by the end of 2014. Of that, 200 would be sponsored by the government directly, and 1,100 would be left for the 85 private sponsorship agreement holders, which includes religious and community groups like ORAT. However, Canada admitted considerably fewer Syrian refugees than Germany, which has welcomed more than 6,000 and promised to take an additional 20,000, and Sweden, which has given permanent residency to 30,000 Syrians. While the U.S. donates the most money to relief efforts in Syria, it has a worse record than Canada: only 105 refugees from Syria were allowed in last year.

Sarah and Michael, both born and raised 30km north of Damascus, fled to the city with their family in 2012 after the violence intensified in their hometown. While Michael was on the way home from class one day at the University of Damascus, the man sitting next to him on the bus was shot by a sniper and died on the spot. “I just looked over and he was slumped over and covered with blood. That was when we realized living there was too dangerous.” In 2013, a car bomb went off on Sarah’s usual route home from work, killing five people. A couple months later, on the day Michael was at the university to graduate with a degree in architecture, a mortar shell crashed into the campus, killing 10 students and injuring another 29.

Their parents are in Beirut, trying to get a visa to get out. Their brother married an Italian woman and moved to Europe. But their friends, Sarah’s boyfriend, Michael’s girlfriend, and extended family are still in Syria. Sarah’s best friend was kidnapped by rebels last year; she has no idea where she is. Ibrahim fled Aleppo in 2012 after five colleagues at the chemical company where he worked were taken hostage and rebel fighters took over the factory. Ibrahim’s parents just told him the city was without water for seven days.

Like most people who end up on ORAT’s sponsorship waitlist, Sarah, Michael, and Ibrahim heard the sponsorship program by word of mouth. Mark was in Beirut in the summer of 2013, stationed at a local Syriac Christian church, conducting interviews with refugees to see if they were eligible for sponsorship, when they met him. Mark tries to seek those who are most vulnerable, but also helps the ones he thinks are most likely to contribute to Canadian society.

The three, who met in Canada, now have a place to live in Toronto, and work at a nearby Middle Eastern grocery store. Members of St. Bartholomew’s are always on call to make sure they have food, money, health care and transportation. Their social network also depends on the congregation; they just spent Christmas at Fung’s house and they are invited to church services and gatherings.

“I always try to thank them for everything they do for us, but my English isn’t good enough yet to express it properly,” said Ibrahim. “We wish that one day we do something to help other refugees, to let them know that something very good happened here.”

An earlier version of this story misstated the number of Syrian refugees resettled in Canada in 2014. The article has been corrected.