Will Shediac, N.B.'s record-breaking 180-foot lobster roll be enough to dissuade competitors from trying to regain the crown? Nope. 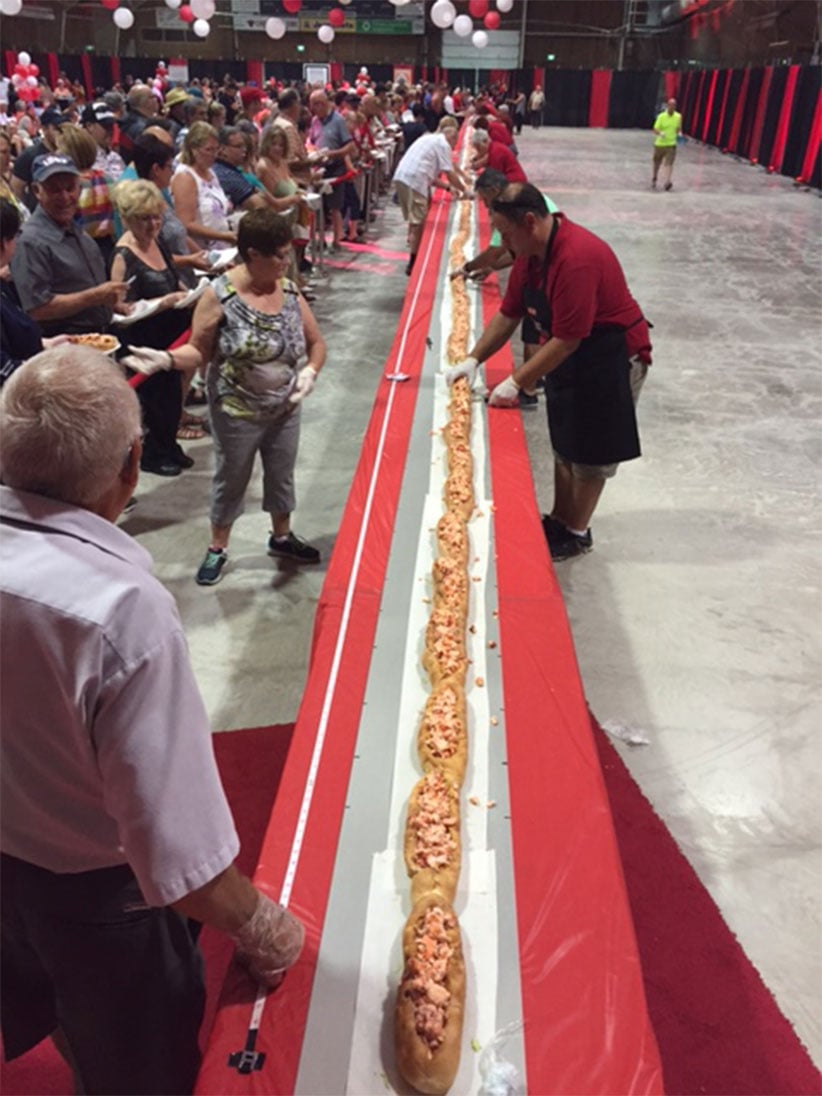 The lobster roll in Shediac, N.B. being cut up after a final measurement was taken. (Kerry Robinson)

Someday, a town will build a lobster roll so long that the record for “world’s longest lobster roll” will never be broken. But that won’t be anytime soon.

When residents of Shediac, N.B. constructed a 180-foot sandwich filled with $5,000 worth of lobster meat (125 lbs or 57 kg) last week, they might have thought it would be enough to permanently dissuade rival communities from ever trying to top it. But the Prince Edward Island Fishermen’s Association held a board meeting last Thursday night, and one item on the itinerary was to decide whether they should—yet again—try to bring the record back to the Island.

The board’s decision was unanimous. “The verdict is we’re going forward with a plan to beat that 180-foot record,” says Melanie Giffin, a member of the PEIFA. “We’re going for it in September.”

It’s been going on like this for several years now, ever since July 2014 when Shediac announced it was building a record-breaking 65-foot lobster roll to commemorate the 65th anniversary of their lobster festival. (The final product turned out to be 68 ft, or 19.5 m). “Once we did the first one, I thought there’d be competition from Nova Scotia,” says Pierre Cormier, with the Shediac Chamber of Commerce.

READ  MORE: So long McLobster—why the infamous sandwich is gone

Instead, it was P.E.I. that stepped up the following year in September, with a 72-foot long lobster roll, a new record, though the folks in Shediac dismiss that effort by noting that they’d already quietly made an 85-foot roll earlier in the year. Even so Shediac rolled out a 106-foot lobster roll in July 2016, only to be bested again by P.E.I.’s 120-foot roll that September.

“It was a great little camaraderie, but now it’s very competitive,” Cormier says. “We call it ‘the lobster war across the pond.’” Giffin concurs: “It’s always been a friendly rivalry between the two.”

Well, until there were three.

“It was kind of tricky to get people to donate lobster,” says James Gibney, executive chef at British Beer Company in Portsmouth, N.H., but in the end people donated about one-third of the US$3,000 worth of lobster. “That may not be much to some people, but to a local lobsterman running one boat, $1,000 pays two guys for a week’s worth of fishing.”

And in an international lobster arms race that shows no sign of ending, mutually assured profit destruction seems inevitable. The lobster roll events in these various communities draw a fair bit of attention for the local lobster industries, but at a time when the price of lobster is at a record high, the market for lobster fishermen to sell their product has rarely been better.

Still, as any veteran of the Canadian lobster roll wars will tell you, getting your hands on the crustaceans has never been the biggest challenge. Instead, the hardest part of making the world’s longest lobster roll—and something Gibney soon discovered is a major point of contention—is producing a long enough bun.

Gibney’s record breaking attempt featured 160 feet of baked bread cut into 1.5-meter portions for easier baking and delivery. But when an American reporter called Giffin to get her opinion on P.E.I. losing the record, she immediately asked if it was done with a continuous bun.

“It wasn’t me calling them out by any means,” she says. “But I was questioning it.”

And apparently the bun does matter.

According to the World Record Academy (which bills itself as a rival to the more famous Guinness World Records) a record-breaking lobster roll must involve a single piece of bread.

“We’d never heard of the World Record Academy,” Gibney says from New Hampshire. “I don’t think anyone has.” He says when planning his towns lobster roll, he went by pictures of the roll made in P.E.I., which appeared as if the bun was divided in pieces. It wasn’t.

As New Hampshire or P.E.I. laid claim to the record—bread fully intact or not—the people of Shediac decided to put both claims to rest. What better way to celebrate Canada Day, they figured, then to bring the record back north.

For Shediac to bake a single 180-foot roll, they needed more than 45 volunteers to show up at an empty hockey arena where the dough was ever so slowly pulled through a pizza oven. Broken hockey sticks we shimmed under the table legs to make sure it was smooth sailing the whole way down.

“At the end of the table, we had someone with a microphone and a loudspeaker, yelling ‘pull’ every so often to make sure we pulled a quarter inch at a time,” Cormier says. They started at 6:30am. They finished at 8pm, at which point the bread was already reaching out the door and into parking lot. 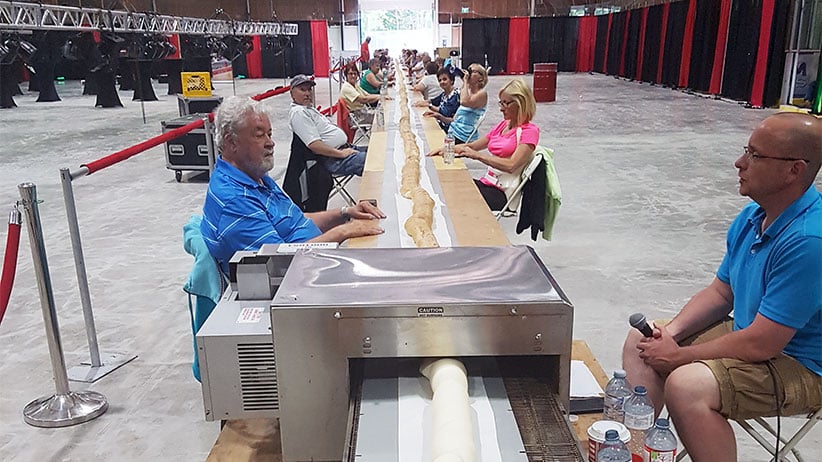 Bread is being baked for the Shediac lobster roll. (Pierre Cormier)

Like any arms race, though, technological advancement can mean the difference between victory and defeat. When P.E.I. attempts to break Shediac’s record in September, it will do so with an innovation it developed on its previous attempt—rather than require dozens of volunteers to spend all day pulling bread through the oven, says Giffin, “we put the oven on a table and then put the table on wheels. We can do it with just a few people because we don’t have to move that roll the whole time.”

Even if P.E.I. succeeds, the record might not hold up for very long. Gibney in New Hampshire is already planning another run at the record. “It’s all friendly,” he says. “I’m certainly not trying to start an international conflict here over a lobster roll.”