An exclusive excerpt from Driven: How the Bathurst Tragedy Ignited a Crusade for Change 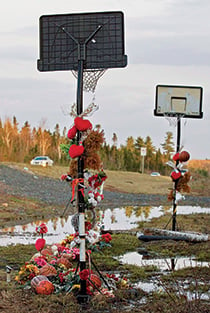 In the early hours of Jan. 12, 2008, on a snowy stretch of highway in New Brunswick, seven members of the Bathurst High School basketball team and their coach’s wife died when their school van collided with a tractor-trailer. In Driven: How the Bathurst Tragedy Ignited a Crusade for Change, author Richard Foot traces the story of the emotional campaign waged by some of the dead boys’ mothers to push the provincial government into holding an inquest. Among that inquest’s eventual recommendations was that the type of van involved in the accident should be banned for student travel, and that replacement minibuses must be equipped with winter tires.

However, five months after the end of the inquest, the mothers were shocked to discover that the replacement fleet of multi-function activity buses (MFABs) would only have winter tires on the rear wheels; the province had opted to use all-season tires on the front. After speaking with experts at tire companies, rubber manufacturers and mechanics, the women learned that mixing tire types posed a safety risk. The women demanded the government enlist Transport Canada to carry out winter-road tests—something New Brunswick officials were dragging their heels on. In this excerpt, Foot follows the women as they struggle to arrange their own test to prove to the province its tire policy was dangerous.

Frustrated by the impasse, and worried that winter was passing by and, along with it, the window of opportunity to conduct new tire testing in freezing conditions, John Mahler, a Toronto Star automotive columnist who’d been in close contact with the women, pitched a new solution. “Let’s do our own test,” he suggested to two of the mothers, Isabelle Hains and Marcella Kelly. Mahler knew the engineers at the companies that owned professional test tracks. Perhaps they could be persuaded to do a favour for the Bathurst moms?

One of the companies Mahler called was Continental, a huge auto-supplies multinational headquartered in Germany, with a state-of-the-art outdoor test track located in northern Michigan. Mahler explained the New Brunswick issue to a testing engineer with Continental, who then discussed the matter with Joerg Burfien, the company’s director of research and development for the Americas. Burfien, appalled by New Brunswick’s policy, was eager to help.

Continental agreed to do the test at no charge, as long as Mahler, or the Bathurst mothers, could come up with a multi-function activity bus and get the vehicle to Michigan. In Bathurst, Isabelle and Marcella asked the provincial government to send one of its MFABs to Michigan for the test, but the province just stonewalled. Valerie Kilfoil, at the Education Department, said it would take several weeks for their request to work its way through the government. She said the mothers should consider renting their own vehicle for their test.

Isabelle then pinned her hopes on Ron Campbell, a salesman with Girardin Minibus, a Quebec company that builds MFABs just like the one they needed. Campbell had closely followed news of the Bathurst tragedy and had come to know Isabelle in the wake of the crash. She had hoped he might be able to lend the mothers an MFAB to drive to Michigan, but Campbell couldn’t pull it off with his company. Girardin was willing to loan a new minibus for the test, but it didn’t want the vehicle driven all the way to Michigan, accumulating mileage. It would only provide a minibus if Mahler or the mothers could find a way to transport it there on a truck or train, a costly proposition.

By now it was January, the winter was ticking by, and Mahler, Isabelle and Marcella were getting desperate. The government continued to insist it was negotiating with Transport Canada for its own test. But there were no details on when that might happen.

Then a news story broke that would have a profound impact on the tire campaign. A staff lawyer for Loblaw Companies, the grocery chain whose truck had collided with the Bathurst High School van, had filed a lawsuit in the New Brunswick courts in December against Wayne Lord, the basketball coach who was driving on the night of the tragedy, and Bathurst Van Inc., the teacher-led organization that owned the white van. The Loblaw lawyer, knowing the law but lacking in common sense, was suing Lord, who’d lost his own wife in the crash, and school officials, to recoup the $41,000 his company had spent towing their tractor-trailer from the crash site and emptying its fuel tanks. The news sparked outrage in Bathurst and across New Brunswick, and many residents vowed to boycott the company’s stores.

Once news of the lawsuit reached Loblaw’s executive suite, the claim was immediately withdrawn. Eager to repair its reputation in New Brunswick, Loblaw asked the City of Bathurst if the company could help the community honour the “Boys in Red,” perhaps by donating money for a new monument in their memory. That same morning, Melynda Jarratt, a friend and supporter of the mothers, contacted Loblaw’s head office in Brampton, Ont., and asked for Inge van den Berg, the vice-president of corporate affairs. “I told her who I was, and said we needed an MFAB to complete the studies that were being offered by Continental Tires. I said the testing was not going to happen if we could not get a bus.” It was probably a long shot, but Melynda figured there was a chance Loblaw might be willing to pay the costs of renting a minibus and transporting it to Michigan. She was wrong.

Melynda couldn’t believe what she was hearing. She quickly informed Isabelle and Marcella of the good news, and told them to expect a phone call from Loblaw. Within hours, Allan Leighton, then the president and deputy chairman of Canada’s largest grocery store chain, was phoning Isabelle in her kitchen in Bathurst to express his condolences and to place his company’s resources at her disposal. It was all settled by the end of the day. After hearing that Loblaw was on board, Campbell said there was no need for the company to actually buy an MFAB. Girardin would loan the mothers a minibus, as long as Loblaw could transport it to and from Michigan on one of its tractor-trailers. He called Isabelle that afternoon to explain what had been decided. That conversation was quickly followed by a phone call from a Loblaw truck driver, who told Isabelle he’d received clear instructions to get the Girardin minibus to Michigan. Isabelle and the minibus, he said, were his top priority for the next few weeks.

Suddenly, Isabelle was awash in emotions she hadn’t experienced in years. She had been battling the government and butting heads with the establishment in her city and province for so long, it was hard to get used to the rather exhilarating notion that people with money and influence were now actively supporting her. No longer were she and her small band of women standing alone against the world of power. They had found potent allies who wanted them to succeed. “People were coming into our lives at this point, and all they wanted to do was help. It was like an army of angels.”

A few weeks later, Isabelle, Marcella and a third grieving mother, Ana Acevedo, flew with Melynda to Sault Ste. Marie, Ont., where they rented a car, drove across the border to Michigan and checked into their motel near the Continental Tires facility. John Mahler, driving down from Toronto, was due to meet them at the motel later that day, along with a professional videographer Isabelle had hired to document the test, which was scheduled for the next morning.

The women were just settling into their rooms when Melynda’s cellphone rang. A reporter from the Telegraph-Journal was calling with news from New Brunswick. The government had announced that morning that Transport Canada had quietly conducted a minibus test for the province, and the results proved what the women had been arguing for months: Winter tires on all wheels gave better performance than a mix of winters and all-seasons. The province was now promising to equip its fleet of MFABs with full sets of winter tires. “What,” the reporter asked, “did the moms have to say to that?”

Melynda didn’t know what to say. She was flabbergasted. The three mothers were also stunned. Within minutes, the four women were inundated with similar calls and emails from the media, all wanting to hear the mothers’ reaction to the province’s surprise announcement, on the very cusp of the Michigan test.

It appeared the women had won a momentous victory. It was an infuriating victory—with the government declaring, the day before their long-awaited Michigan test, that it now agreed with their position on tires—but it was a victory nonetheless.

“They caved under public opinion,” the moms said. “It’s sleazy as hell.”

The women had won their showdown with the government and achieved their policy goal. But what now? Should they go ahead with the Continental Tires test? What if that test produced an unfavourable result?

Mahler and the engineers at Continental urged the mothers to press on. “Of course, you’re going to do the test,” Mahler said. “We know the test is going to prove that winter tires [on all wheels] are the best. We’re not stopping, the show must go on.”

Excerpted from Driven: How the Bathurst Tragedy Ignited a Crusade for Change, on sale Oct. 22. Copyright 2013 Richard Foot. Published with permission of Goose Lane Editions.