'So many people identify with that picture'

Warren “Whitey” Bernard doesn’t remember the day the photo was taken. He can’t recall breaking free from the grasp of his mother, Bernice, to reach for his dad, Jack, a member of the Duke of Connaught’s Own Rifles marching down the streets of New Westminster, B.C., on Oct. 1, 1940.

But he does remember the fame that followed. The Province published Claude P. Dettloff’s powerful photo, “Wait for me, Daddy,” on its front page the next day. Magazines and newspapers across the Western world soon did the same, turning it into one of the most famous photos of the Second World War. Schools in B.C. hung a copy in virtually every classroom. “Everybody was excited about it,” says Whitey. “I didn’t used to broadcast that it was me, but usually the teachers would find out one way or another.” For six weeks at a time, he was pulled out of school to speak at war-bond drives. He’d step on stage with an actor dressed up as his dad and deliver a tearjerking speech in front of a massive print of the picture.

Whitey’s dad returned to Canada in 1945, but his parents’ marriage didn’t last. Away from the world’s gaze, Whitey grew up and worked across Western Canada as a machinist, pulp mill worker, port engineer, commercial fisherman, tile worker and land commission agent. Eventually, he settled down in Tofino, B.C., with his second wife, a nurse, and three kids (he has a daughter from a previous marriage) and devoted most of his time to managing a marina that remains in the family to this day. Away from work, he founded a little-league baseball team, joined the local Legion and became a lay canon in the Anglican Church.

Eventually, people in Tofino asked Whitey to join city council. When he did, “the mayor at the time said to me, ‘Okay, you’re in charge of water,’ ” he recalls. With no political experience, “I had not a clue.” But Whitey picked it up quickly; while he was on council, the town won $11 million from the federal government for water and sewer infrastructure to help develop Tofino, a fishing and forestry town, into a tourism destination. “They made a national park on our doorstep,” says Whitey, who later became the town’s mayor. “Where were all these millions of people going to go?”

Now retired, he’s lived in Tofino for 53 years. “I’ve had lots of opportunities to move away,” he says. He and his wife would look at other options, but “when we came home, boy, Tofino looked pretty good.” 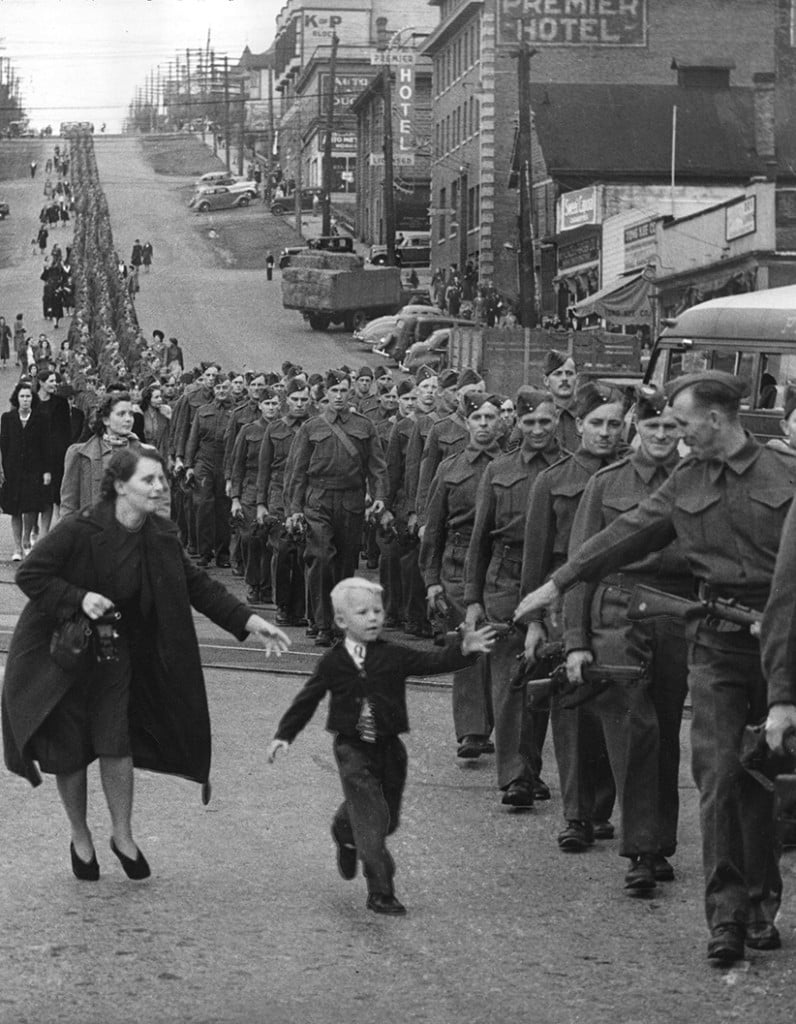 “Wait for me, Daddy,” featuring Bernard and his parents, hung in nearly every classroom in B. C. (City of Vancouver Archives)

In 2014, “Wait for me, Daddy” was featured on the toonie, on a stamp and in a bronze sculpture in New Westminster. “I was really surprised at the emotion it evoked,” Whitey says. “And not just from elderly people who had experiences at wartime or who were kids during the war, but younger people whose grandpa was in the war.” Seventy-five years after the photo was taken, Whitey reckons he knows the names of most of the soldiers in the photo—and the stories of countless others that weren’t. “So many people identify with that picture.” — Luc Rinaldi