An entire segment of the economy now needs to be properly accounted for and studied. It’s a massive and historic opportunity. 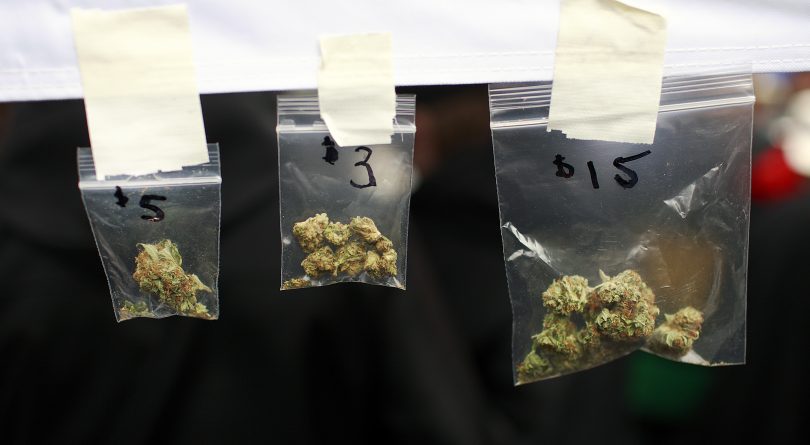 Marijuana in baggies is displayed for sale as thousands of enthusiasts gather to celebrate the 19th anniversary of 4/20 April 20, 2014 at the art gallery in downtown Vancouver, B.C. (Photo by Jeff Vinnick/Getty Images)

Who stands to gain from Canada’s looming legalization of marijuana?

Those who indulge will doubtless be the biggest beneficiaries, as they’ll soon be able to enjoy the recreational drug of their choice without fear of legal sanction. Entrepreneurs and investors also seem to be relishing the prospect of a regulated market for pot, given the mini-stock market boom in Canada among licenced marijuana producers. And of course federal and provincial politicians are eagerly anticipating a whole new category of tax revenue.

The looming legality of pot has sparked a mini-boom for economists as well. Not only must they now calculate the size and scope of Canada’s no-longer-underground pot economy, but legalization also offers up an exciting variety of new observations and evidence about this newly-revealed market and the effect government is likely to have on it. Legal or illegal, the laws of supply and demand still hold.

For economists at Statistics Canada, legalization—expected sometime this August—has created many challenging new tasks. Once marijuana becomes a legal product, for example, buying and selling it will become a permanent component of Canada’s Gross Domestic Product (GDP). But simply recording a massive one-time bump in economic activity on the day this occurs would be a equally massive statistical error, says James Tebrake, StatsCan’s Director General of Macro National Accounts.

“Cannabis consumption has been going on for a long time in Canada,” Tebrake says, pointing to a recent StatsCan estimate that puts the current pot economy at an annual $5.7 billion. “So to provide a credible assessment of Canada’s economic growth after legalization, we need to explain what was going on pre-legalization.”

To avoid recording an arbitrary jump in their data, StatsCan has had to revise its estimates of Canada’s GDP going back to 1961 to incorporate the underground pot economy. This massive undertaking involves estimating past demand for marijuana, as well as teasing out the cost of production for illegal grow ops on an historical basis to properly account for the supply side.

StatsCan probably should have been counting the cannabis economy all along, as is currently the case with Britain’s national statistical agency, says Tebrake, since GDP is supposed to include all market production that occurs within an economy, regardless of legality. But the absence of good data and questions of morality meant this task was left undone. “Now that it’s going to be legal, we can’t ignore it any more,” he says.

There could still be a noticeable ‘pot bump’ in GDP data whenever legalization takes affect, but if StatsCan has done its homework properly this will reflect a latent increase in demand caused by the fact it’s now a legal product, and not simply a shift away from the black market among existing users. (Tebrake admits, however, that he isn’t quite sure what will happen to Canada’s labour market statistics after legalization; anyone who previously worked in a grow op or as a dealer would not have been counted in earlier employment data, while legal versions of those jobs will henceforth be part of the official economic landscape.)

StatsCan’s other new major obligation is to track the current price of pot. “As economists, we know price will be key to understanding how much of the illegal underground activity goes above ground with legalization, and whether supply is meeting demand,” Tebrake says. To get reliable price data, StatsCan recently launched the wryly-named, crowdsource website ‘StatsCannabis’ that allows pot buyers to anonymously post what they paid, where and when.

According to StatsCannabis, the current average street price is $6.82 per gram, a figure Tebrake considers “pretty accurate” given the strong response from consumers eager to do their bit for national accounts statistics. As such, the data reflects a wide variety of economic truisms. A gram costs more in the northern territories, where transportation is an obvious expense, and is cheaper in provinces with a lot of local supply, such as British Columbia and Quebec. And advice that you save by buying in bulk holds true for pot as well as toilet paper. Individual purchases of a single joint can run as high as $9/g to $10/g, while those making large purchases often report paying $4/g or less.

This new and highly accurate data on price is substantially lower than previous official efforts at estimating the street price, which recently put it as high as $8.84/g. And this poses a significant economic problem for Federal Finance Minister Bill Morneau, who in December announced a proposed national floor price of $10/g, inclusive of a 10 per cent tax.

Given that wiping out the black market is one of the stated goals of marijuana legalization, Morneau’s initial price strikes some observers as higher than a pot smoker chillin’ in their basement.

“I have no idea why the finance minister picked $10/g,” says Stephen Easton, an economist at Simon Fraser University in Vancouver, B.C. “As an administered price, it will never work.”

Easton, who in 2004 published the first-ever attempt at estimating the size of the pot economy in Canada, figures the gap between the current street price and the government’s planned floor price is far too wide to sustain. “Most people would probably prefer to deal in the legal market for reasons of ease and selection,” he observes. But even convenience has its price. If government-licenced stores insist on a price of $10/g, he expects “people will just grow their own, or continue to deal on the illegal market.”

Historical price data collected by StatsCan suggests that consumers have been well served by the black market to date. Since 1989, the street price per gram appears to have fallen from $12 to the current $6.82 as improvements to quality, supply and distribution have vastly outweighed any increase in demand.

“The wonderful thing about the private sector is that it provided an illegal substance in a perfectly competitive manner,” says Easton. “Prices have been falling for more than 20 years.” Now, with a massive amount of new legal supply—produced using efficient, large-scale industrial production techniques—about to come on stream, there’s no reason to expect a change to this downward trend. Easton likens Morneau’s efforts at maintaining a $10/g floor price to that of fabled King Canute, who tried in vain to hold back the ocean. You can’t fight tides, or the laws of economics.

Easton’s advice to the finance minister: set a really low price initially to wipe out the illegal market in its entirety. “And after that’s done, then governments could gradually raise the price to satisfy their revenue demands,” he says. “The eagerness for governments to maximize their tax revenue today is going to keep the black market in business for a long time.”

Beyond reinforcing elemental truths of supply and demand, marijuana legalization is also providing economists with a once-in-a-lifetime opportunity to study a dramatic change in market structure.

“This is creating real academic interest,” says Easton. “There aren’t many examples of a market moving from illegal to legal. As economists, we’ve always had to fall back on the lessons of Prohibition in the U.S. [from 1920 to 1933]. Now we have an exciting new example with the prospect of some good data.”

As an added bonus, he says there’s something about using marijuana as a lecture topic that seems to improve attention spans in the classroom. “The students sure love talking about it,” he notes.