Who knows what Harper is thinking? Ray Novak

From the archives: He used to live above Stephen Harper’s garage. Now he's Harper's No. 1 man 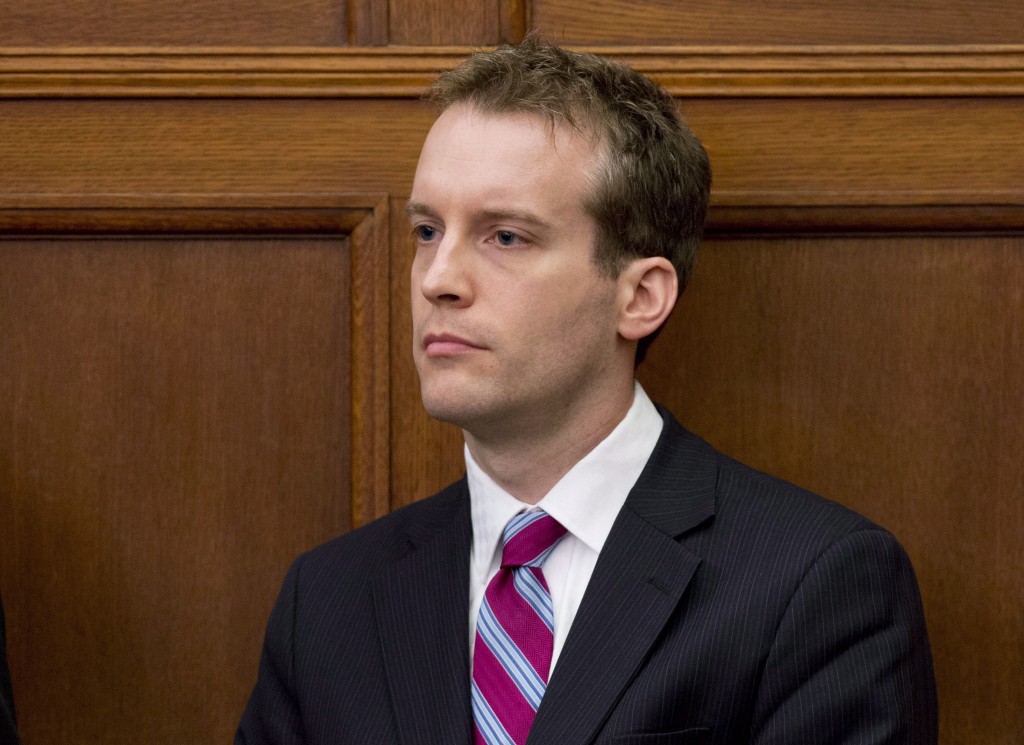 Canadian Prime Minister Stephen Harper’s Chief of Staff Ray Novak stands along the wall as he watches the prime minister speak to members of Caucus on Parliament Hill Tuesday May 21, 2013 in Ottawa. THE CANADIAN PRESS/Adrian Wyld

From the Maclean’s archives: A profile of Ray Novak by Aaron Wherry first published in 2010. Novak takes over as Prime Minister Stephen Harper’s chief of staff in the wake of Nigel Wright’s resignation:

The class was Political Science 230, an overview of Canadian politics for second-year honours students at the University of Western Ontario, and the professor had just misstated the results of the 1997 federal election, accidentally transposing the seat counts of the Progressive Conservatives (20) and New Democrats (21). One student in the class of 125 interjected to note the mistake. “It’s gutsy to correct a prof,” the professor recalls now, “and I appreciated being called out.” Within a decade, both the professor, Ian Brodie, and the student, Ray Novak, would be members of the Prime Minister’s Office as senior aides to the new prime minister, Stephen Harper.

From that fateful interjection does a minor legend follow. More than a decade after, Novak is one of the most intriguing players in Ottawa, as widely praised by those around the Harper government as he is little known to the public. “If you were building a perfect political aide, you would end up with Ray Novak,” says Jim Armour, a former Harper aide himself. “He’s perhaps a perfect combination of trusted loyalist, strategist, interpreter, and maybe even horse whisperer.” What’s more is how integral he has become to the life and business of Stephen Harper.

Four and a half years into Harper’s reign, Novak has risen to the rank of principal secretary in the PMO, outranked by just the Prime Minister’s chief of staff, and maybe then only in the technical sense. Two weeks ago, as Harper took his place on the world stage at the G8 and G20 summits, Novak was at his side, as he has been for nearly a decade. A week ago, when Harper announced the appointment of a new governor general, it was the culmination of a selection process overseen by the 33-year-old aide. “Ray is effectively the Prime Minister’s closest confidant,” enthuses one government official. “Not only as a member of his staff, but as a personal and intimate member of the Prime Minister’s life.”

There is effusive praise when Novak, who declined to speak with Maclean’s for this story, is the subject of discussion, but this particular bit is not mere conjecture. For nearly four years while Harper was opposition leader, Novak, then with the title of executive assistant, lived in a small loft above the detached garage at Stornoway—the opposition leader’s official residence—eating meals with the family and growing close to Harper’s two young children. This is the detail that has come to define an aide who, by some tellings, knows Harper better than all but the Prime Minister’s wife and mother. “Ray was with him more than anybody else for years and years and years,” says Brodie, who served as Harper’s chief of staff for three years. “They were literally hardly ever apart.”

Originally from the Ottawa Valley, Novak was president of the campus Reform club at Western.
Preoccupied with student fees, he staged an impressive, if unsuccessful, campaign for student council president. He rode the Reform youth bus during the 1997 election, then interned with Preston Manning’s office in the summer of 1998 and Reform MP Rob Anders’s office in 1999. During his post-graduate years at the University of Calgary, he met, among other key players, Tom Flanagan, another professor who would serve as chief of staff to Harper and who led Harper’s Canadian Alliance leadership campaign. Novak was a finalist in Magna’s “If I Were Prime Minister” essay contest in 2000—his submission called for pension and health care reform—then worked as a researcher for the National Citizens Coalition, a conservative advocacy group then led by Harper. When Harper returned to federal politics in 2001 to pursue the Alliance leadership, he tabbed Novak as his assistant.

The job of executive assistant is mostly associated with menial labour—carrying the briefcase, ensuring the politician is properly watered and fed—but Novak seemingly exceeded the title, both as close counsel and trusted manager. In addition to living with the Harper family at Stornoway, he oversaw Harper’s tour operations, coordinated with his security detail and served as the Prime Minister’s envoy to the families of the Air India bombing. “Ray will get it done,” says a former member of the PMO. “And he will do so with total discretion.” Novak served in that role through another leadership race, two federal elections and 2½ years in the PMO. When Guy Giorno, Harper’s current chief of staff, succeeded Brodie in July 2008, Novak was named principal secretary. He is now the longest-serving member of Harper’s inner circle.

His influence is said to spread from the operations of the PMO to foreign and domestic policy. As principal secretary, Novak travels with the Prime Minister abroad, oversees the speech writing department and coordinates the visits of other heads of state and dignitaries (for organizing the recent royal visit, the Queen made him a lieutenant of the Royal Victorian Order, an honour bestowed for service to Her Majesty). During the G8 and G20 summits, he listened in on the leaders’ meetings and sat in on Harper’s bilateral discussions with individual leaders. For the last several weeks, he has ensured the committee charged with advising the Prime Minister on the next governor general was able to go about its quiet work. He toils, by one account, from about 5 a.m. to midnight.

He is described as a populist, a monarchist and a libertarian with a sharp anti-Communist streak, the latter perhaps attributable to the influence of his late father, who fled Czechoslovakia in 1968 after the Soviet Union-led invasion. He is not noted as an overbearing partisan. “Ray is the common sense around the table,” says one government official. Adds a former ministerial aide: “He’s one of the least obnoxious people you will ever meet in Ottawa.”

Indeed, the adjectives used to describe Novak by those in and around this government are uniformly fawning: trusted, selfless, rational, efficient, smart, thoughtful, polite, patient. “It will sound to you like I am gushing, but I think you would have to look very, very, very hard to find anyone who will say a negative thing about him,” says that ministerial aide. Adds Dimitri Soudas, the PM’s director of communications and a close friend: “Ray is one of the very few truly genuine people you will encounter in the world of politics.”

He would seem to personify the Prime Minister’s preferred ideals: loyalty, discretion and an ability to, in the favoured parlance of this government, get things done. He is willing and able to serve quietly, an important prerequisite for most prime ministers, especially one, such as Harper, who so values the control of information. And not to be discounted are his roots in the Reform party. “There is a sort of programmatic, political point to be made that still drives folks from that group forward,” Brodie says. The result is an unrivalled history. “Their relationship is close enough that the PM, I think, feels he can speak freely and as plainly as possible to Ray and have Ray understand exactly what he is driving at and to pass along his views to others as a result,” Brodie says. “That’s actually trickier than it sounds. Because he understands the PM’s thinking very intimately, he understands the historic roots of the PM’s evolution of his thinking and evolution of his relationships and evolution of his political history in a way that lets him understand immediately what the PM’s talking about.”

All of which may come back to a common theme in the testimonials to Novak’s place in Harper’s world: calm. During the coalition crisis of December 2008, Novak is said to have been a “beacon of stability.” Even in less dramatic times, that is antithetical to the atmosphere in deepest Ottawa. “It’s a macho business,” says that former member of the PMO. “It’s a field where you’re allowed to be bombastic on the public stage and that tends to result in people being bombastic privately within offices. It’s very useful to have somebody who is a calming influence, a stabilizing influence and a focused influence who simply is there to get the job done and to carry things through to completion.”

In the middle of it all, ensuring the numbers add up, is Ray Novak. “In some respects,” the former member of the PMO says, “he’s the youngest old wise man in Canadian politics.”