It was one of our largest art heists, but no one has been punished 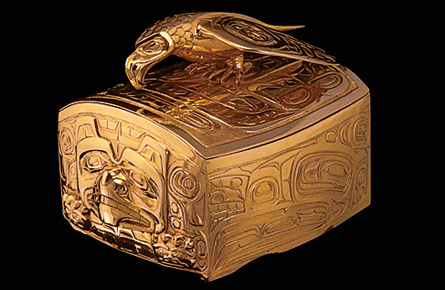 Twelve pieces of stolen artwork by the late Haida artist Bill Reid are back on display at the University of British Columbia’s Museum of Anthropology, but questions swirl around the shadowy circumstances of their recovery.

The works, described as “national treasures” and valued at about $2 million, were taken on May 23, 2008, while a security guard was outside on a smoke break. The theft triggered a multi-jurisdictional hunt involving 50 investigators. The university posted a $50,000 reward, fearing the items would be melted down for their modest gold value of about $15,000. Two weeks later, police raided residences in Burnaby and New Westminster, recovering 10 of the items. Three people were arrested, but later released.

That August, the RCMP announced the recovery of the remaining pieces, a gold eagle brooch and a carved argillite pipe, missing a broken end. Police won’t say when, where or how they were recovered. At the time, an RCMP officer said the theft was the work of unsophisticated career criminals from the Vancouver area. But so far they’ve gone unpunished after pulling off one of the largest Canadian art heists in recent memory.

RCMP Cpl. Annie Linteau said last week the results of their investigation went to the provincial Crown attorney’s office last fall. “We did recommend charges but we’re waiting to find out what the Crown’s decision is.” She said “cash rewards” were paid during the investigation, but no money came from the university. “Our priority was the recovery of the items, and ultimately we were able to get them back.” Crown spokesman Neil Mac­Kenzie said the delay is partly due to the complexity of the case. “We still haven’t completed our review of all the material.” He wouldn’t say what charges, if any, may be laid.

The museum reopened in March after previously planned renovations, including an upgraded level of protection. The recovered items aren’t likely to disappear again, says UBC spokesman Scott Macrae. “We feel very good about the level of security.”