Parizeau remembered at funeral for economic contributions to Quebec

Seven Quebec premiers, both past and present, as well as two federal party leaders, are among those who remembered Jacques Parizeau 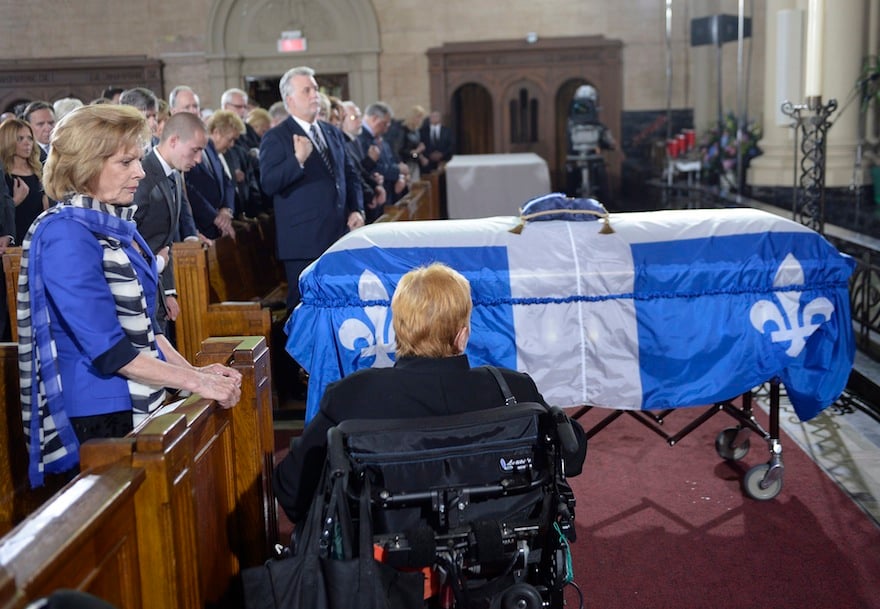 Widow Lisette Lapointe (left) looks on from the front pew at the state funeral for former Quebec premier Jacques Parizeau in Montreal on Tuesday, June 9, 2015. THE CANADIAN PRESS/Paul Chiasson

MONTREAL – Thirty years worth of Quebec leaders attended Jacques Parizeau’s funeral Tuesday as premiers past and present paid tribute to the sovereigntist icon who is credited with playing a key economic role in ushering the province into the modern era.

Couillard told the funeral he met Parizeau only a handful of times and that they had agreed to get together at some point to discuss Quebec.

“He was also a strict professor who didn’t like shortcuts, much less empty words, but I don’t remember him ever denigrating or belittling an opponent.”

After the ceremony Couillard gave Parizeau’s widow Lisette Lapointe the Quebec flag that flew at half-mast over the provincial legislature in honour of her late husband.

Parizeau, who became PQ leader in 1988 and officially stepped down as premier in January 1996, died on June 1 at the age of 84 after a lengthy illness.

While many Canadians remember Parizeau for his career-ending comment on the night of the sovereignty referendum in 1995 when he blamed the Yes side’s narrow defeat on “money and the ethnic vote,” the focus Tuesday was clearly elsewhere.

The Montreal-born economist was hailed for helping to develop the province in the 1960s by contributing to the nationalization of Hydro-Quebec and the creation of the provincial pension fund manager called the Caisse de depot et placement du Quebec.

“Even if we had differences from time to time, he was a man for whom I had great admiration,” said Marois, a cabinet colleague of Parizeau before serving under him during his brief tenure as premier.

“What I remember about him is that he changed the face of Quebec. He belongs in that select group of people who had an enormous influence on Quebec becoming a modern state.

“On a personal level, I had incredible respect for him and I really enjoyed working with him.”

“He was tough, determined and someone who was very impressive,” the NDP leader said.

“He’s one of the most impressive people I’ve ever met in my political career.”

Trudeau also had words of praise for a man whose beliefs were at the opposite end of the political spectrum from those of his own father, ex-prime minister Pierre Elliott Trudeau.

“He had a political and philosophical brilliance that had a great impact on how modern Quebec turned out,” the Liberal leader told reporters.

The funeral was held a few days after thousands paid their respects to Parizeau as his body lay in state in Montreal and Quebec City.

A few hundred people watched Tuesday’s service on a big screen across the street from the church.

Some held large Quebec flags and they clapped and cheered as big names in the sovereigntist movement walked into church.

One of those who received cheers and applause was Peladeau, who said Tuesday’s ceremony was “of a remarkable beauty” and “profoundly emotional.”

“Parizeau left behind many things,” Peladeau added, “and much inspiration.”

Jean-Francois Lisee, an PQ MNA who served as an adviser to Parizeau when he was premier, said his former boss wanted to take “two artifacts with him on his final journey.”

Parizeau, at his request, will be buried with his National Order of Quebec medal as well as with the certificate of the honorary degree from the University of Montreal he received in October, Lisee said.

“It’s sort of like everything has come full circle,” Lisee said. “He wanted to make sure he was remembered for his teaching,” referencing Parizeau’s time at HEC Montreal, a business school affiliated with University of Montreal.