Why a Canadian soldier led the Queen's Guard

Capt. Megan Couto was the first female to ever lead the Guard. How did it happen, and what's behind the tradition? 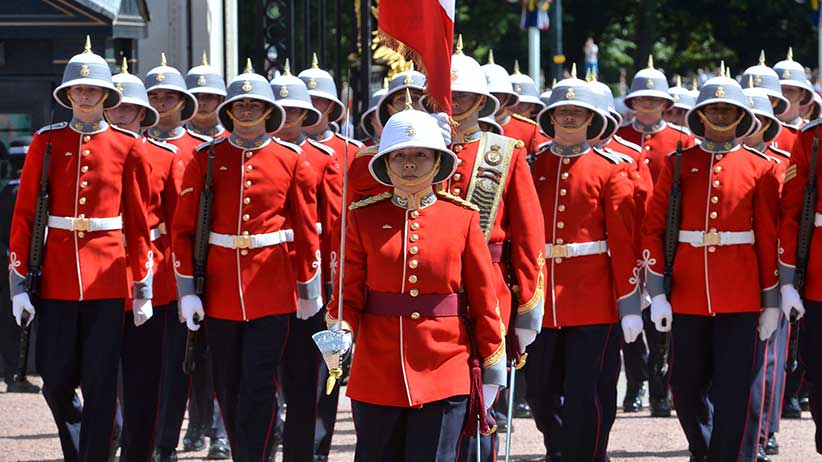 On Monday, Capt. Megan Couto of the Second Battalion, Princess Patricia’s Canadian Light Infantry, became the first woman to command the changing of the guard at Buckingham Palace. It’s an historic achievement, but also raises some questions like: Why hasn’t a female British military member ever performed the duty? And what do the guards do, exactly?

Here are four quick questions (and answers) about the event.

Watch as Canadian Soldier Captain Megan Couto becomes the first female ever to Captain The Queen’s Guard during Changing the Guard. pic.twitter.com/iSjgX98Eaz

Q: Why had a woman never before commanded the changing of the Queen’s guard at Buckingham Palace?

A: Guardsmen outside of Buckingham Palace are infantry soldiers, and the British Armed Forces doesn’t allow female troops in combat units. At least not yet. The country has set in motion reforms to get women into the infantry by 2018—at which point seeing a woman command the Changing of the Guard will hopefully be less of a rarity.

Canada, however, hasn’t had those gender restrictions since 1990, when Sandra Perron became Canada’s first infantry officer (and recently wrote a book about it).

Q: How often do Canadians get to be part of this tradition?

A: Not too often. The duties are most often bestowed on a member from one of five regiments of the Foot Guard from the British Army’s Household Division, which includes members from Britain, Ireland, Scotland and Wales.

But other Commonwealth nations get a crack at protecting the Queen every now and then. Members of the Canadian Expeditionary Force’s 117th Battalion were the first Canadians to earn such an honour, acting as guardsman for King George V back in 1916. In 2014, Canada’s Royal 22e Regiment—to celebrate its 100th anniversary—became the first to command the Guard Sentinels in French.

This year, several Canadian regiments are getting the opportunity as part of the country’s 150th anniversary of Confederation.

Q: What are their duties as guards, exactly?

A: They’re protecting Buckingham Palace, as well as other residences of the Royal Family. While the changing of the guard is mostly seen as ceremonial, and a regular tourist draw at 11:30 a.m., all the Queen’s Guard are fully operational soldiers who were recently on active service.

So don’t mess with them like this guy did.

A guard nearly pulled his gun on the Queen recently, when he mistook her for an intruder during her late-night stroll around the palace grounds.

“Bloody hell, Your Majesty, I nearly shot you,” he reportedly told her.

Q: How many guards does Buckingham Palace need?

A: The Queen’s Guard consists of 40 men or women as guards, plus three officers. And if there are four sentries standing at the front, that means Queen Elizabeth is home. If there are only two sentries, she must be away.

Q: What’s the significance of the  uniform that the Canadians wore, which is different than what the British guards often wear?

A: You mean, why weren’t the members of the Second Battalion, Princess Patricia’s Canadian Light Infantry wearing those big furry hats—but the one with a sharp tip?

They are called Pith helmets, and the choice of helmet style “comes down to historical precedent specific to each regiment,” explains Captain Derek Reid of the 1 Canadian Mechanized Brigade Group with the Canadian Armed Forces. “You may also notice that the helmets the officers wear are entirely white, while the non-commissioned members have a coloured fabric on theirs. In the case of the Princess Patricia’s Canadian Light Infantry, that colour is ‘French Grey’ which is the colour of the Third Canadian Division.”