Yes, the Quebec Liberal party is a source of endless frustration. But the latest accusations blaming English voters are absurd. 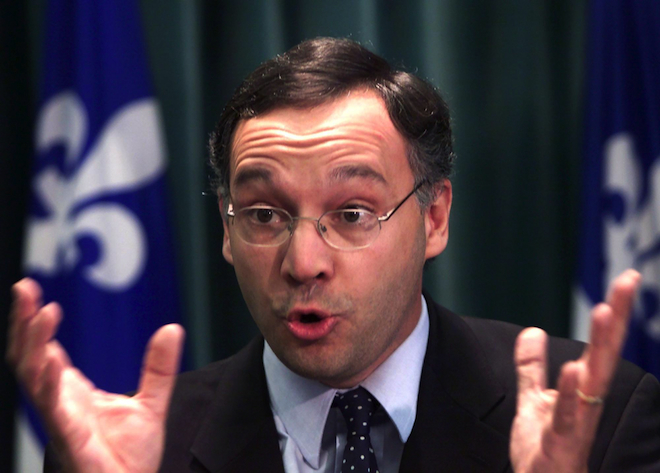 The Quebec Liberal Party has a cockroach-like survival ability, having governed for all but 18 months of the last 13 years. This, despite having weathered countless scandals, protests, resignations, embarrassments, not to mention a middling economic performance and outsized school dropout rates.

For many, including this corner, it is a source of endless frustration. The reasons behind it have to do with the Liberals’ enduring, 150-year-old brand, the party’s broad support amongst the province’s business elite and, with a few very notable exceptions, Quebecers’ wholly normal knack for supporting the homogenized status quo.

Of course, others still blame the English, which brings us to Joseph Facal. “Those who are surprised by the Liberal Party’s resilience are either distracted or self-censuring,” he bellowed in a Journal de Montréal column the other day. “How is it that a party repudiated by 75 per cent of francophones can get 33 per cent support in the polls? It’s obviously because it has about 75 per cent of the non-francophone vote.”

Obviously? Why, yes. As a former Parti Québécois cabinet minister and forever-blinkered language hawk, Facal is well steeped in the Quebec nationalist boilerplate that scapegoats anyone who doesn’t look or sound like him. What’s surprising, though, is that he—a Sorbonne-trained public policy professor—would commit this view to print when it’s demonstrably wrong.

Let’s start with his chief accusation: that the Liberal Party of Quebec “wouldn’t even be official Opposition but a third-place party without non-francophone votes.” Together, Quebec anglophones and allophones (those who have neither French nor English as their mother tongue) number about 1.3 million people, or about 17 per cent of the population. In 2014, the Liberal government received about 40 per cent of the eligible vote. I’ll let you do the math. Clearly, Facal didn’t.

Facal’s argument is all the more absurd when you consider how the English and/or non-white vote is what pollsters call inefficient. Over 80 per cent of Quebec’s anglophones are in the greater Montreal area; not coincidentally, eight of 10 of the Liberals’ biggest landslides in the 2014 election were in Montreal ridings, according to data from the province’s electoral authority.

Bully for the Liberals, except the party wins by huge margins—which, in our first-past-the-post system, amounts to wasted votes. Liberals won those 10 ridings in 2014 by an average of 25,323 votes. The Parti Québécois, meanwhile, won its top 10 biggest margins by an average of 5,957.

Translation: when it doesn’t matter whether you win by one vote or 10,000, the PQ’s vote is far more efficient than that of the Liberals. It is the reason why the party hasn’t exactly embraced electoral reform; doing so would further damn its already dwindling electoral fortunes. It is also why, in 1998, the party lost the popular vote but won the election regardless. Surely Facal should have at least a vague memory of this, as he ran in this election and was made a cabinet minister thereafter.

If there is a recent example of the Liberals’ truly exasperating durability, it lies in the riding of Chicoutimi. Nestled in the nationalist heartland of Saguenay–Lac-St-Jean, it should be easy pickings for the Parti Québécois. And it was: the party garnered 46 per cent of the vote in a recent by-election.

Yet despite the arrest of a former Liberal deputy premier on corruption charges weeks before, and the sacking of the current Treasury Board minister mere days before the vote, the Liberals came in second, with 30 per cent. This speaks to many things, among them the enduring Liberal brand and the appeal of voting for the party already in power. What it isn’t, as Facal suggests in his column, is the fault of the English: Chicoutimi is 98.3 per cent French.

Instead of blaming the English and/or non-white people, Facal would do best to look to his own party. Many moons ago, the Parti Québécois made an effort to recruit non-francophones to the nationalist movement. Gérald Godin, the PQ’s first immigration minister, wanted Quebec to be a respite for “the uprooted men and women who came to make a life in our corner of the world.”

It’s tough work, no doubt hindered by former premier Jacques Parizeau’s “money and some ethnic votes” jibe following the 1995 referendum. But then, success in politics means convincing the incredulous and assuaging the apprehensive. Godin made certain inroads, as did PQ leaders Bernard Landry and André Boisclair.

The federal Liberals spent a decade in purgatory in Quebec following the sponsorship scandal. Too corrupt, too federalist, too Ontario-centric, said the pundits. Yet the party now holds a majority of Quebec’s federal seats, in large part thanks to leader Justin Trudeau’s ability to sell Quebecers on the party’s merits, against all odds.

Facal shouldn’t be scapegoating. He should be taking notes.