Why a lot of B.C. skiers are kissing Whistler goodbye 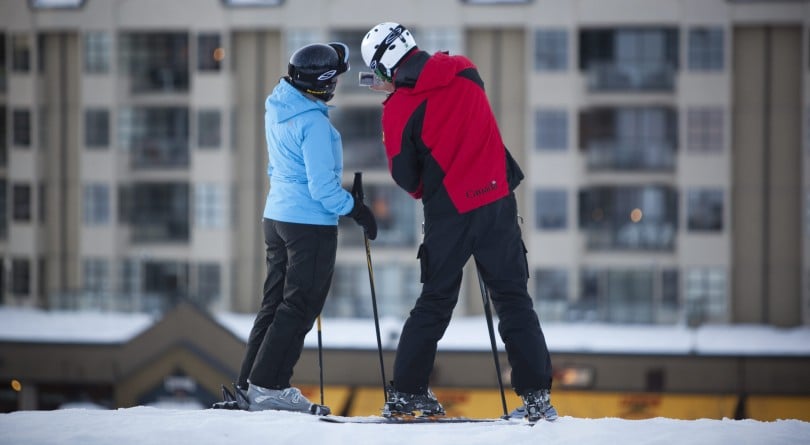 A pair of skiers stop to take a photo of Whistler village in Whistler, B.C. January 5, 2009. John Lehmann/Globe and Mail

It was bad enough when big foreign capital shot Vancouver property values to the moon. Now some locals complain a giant American resort operator is pricing them out of Whistler Blackcomb, B.C.’s premier ski destination. It may not be a hardship on the same scale, but it has raised the ire of some ski and snowboard enthusiasts who still think of Whistler as their local hill.

Since the takeover by Colorado-based Vail Resorts, the price of a last-minute, peak-season day pass—favoured by casual local skiers and boarders who enjoyed cherry-picking “blue bird days”—has increased by more than 20 per cent. The increase has caused locals young and old to give up on the world-class mountain, a tantalizing 120 km north of Vancouver. Instead they are day skiing at local hills nearer to the city and planning weekend getaways in the B.C. Interior at resorts like Sun Peaks near Kamloops or Kelowna’s Big White.

This isn’t just about money. There was the new resort phone app with weather and snow updates that initially popped up in Fahrenheit instead of Celsius, and glitches in the season’s pass rollout. Small things to be sure. But those plus the cost increase fed a growing sentiment that Whistler’s laid-back culture was changing to resemble American resorts like Aspen, which cater to the planet’s uber-wealthy rather than local clientele. Ride the Whistler Blackcomb gondolas on any given winter weekend and you’ll hear myriad languages spoken by international visitors dressed in ski couture.

For Patrick Hay, a 28-year-old clinical therapist from Vancouver, the recent price hike was the last straw. During peak season in 2017-2018 a last-minute day pass sold for $156, up from $129 before the resort sold. “It’s gone from pricey to stratospheric,” said Hay, who has vowed not to return. “As a renter living in the West End, it’s just not feasible.

Hans Johnson, 38, quit Whistler when it sold. This year he bought a $300 downhill pass at Cypress, a local mountain in West Vancouver. While he could afford the occasional Whistler Blackcomb day pass, he’s offended by the cost and said if he did pay, he’d probably be skiing alone. Most of his friends won’t go. “There’s better ways we can have fun,” Johnson said.

Vail’s pricing structure for Whistler Blackcomb is a Byzantine tangle of offerings, some priced in Canadian and one in American dollars. Prices vary depending on the number of days and how far in advance you buy. The one- and three-day Edge cards, which gave casual visitors a break, are gone, as is a past deal with 7-Eleven that offered a 10 per cent discount on lift tickets.

The new model rewards dedicated—and monied—skiers in the market for a season’s pass at Whistler Blackcomb, or Vail’s Epic pass, offering unlimited skiing at 64 partner resorts world-wide, including Whistler Blackcomb.

Rob Katz, Vail’s CEO, said in a phone interview the company values its local customers and points out the price of a season’s pass is dropping under his watch. Early-bird adult season’s passes for 2018-19 retailed for $1,289. And next year children between kindergarten and Grade 5 will be granted five free ski days (kids under six already ski free all year), he noted.

Whistler Blackcomb is North America’s largest resort and needs a mix of local, national and international clientele to thrive. Katz said he takes the price complaints from casual local visitors seriously and may consider a tweak. “As years go by, they’ll continue to see us do better.” But the business model, which encourages people to commit early, is critical in an industry threatened by climate change, he added. “The weather is getting more variable and ski resorts face very significant risks.”

To be fair, any vestiges of the counter-culture vibe where some lifties lived off the grid in squatter cabins until the 1970s, had vanished long before Hay learned to ski. As the resort grew, it became replete with five-star restaurants, luxury spas, jewelry stores and galleries. Still, the past few times Hay skied, he noted an absence of local visitors and felt uncomfortable among the monied clientele. “It feels like everyone around you are rich executives, people who have dropped $10,000 to $20,000 to be there for a week.”

Wilhelm-Morden noted Whistler consciously restricts development and takes steps to keep living costs affordable for residents and visitors. “Over-tourism is a risk places take,” she said. Whistler builds affordable housing for its workforce and offers low-cost activities, including ice skating, Nordic skiing and cycling for people who can’t afford lift tickets. “We don’t want to be Bruges,” she said, referring to the medieval-era Belgian city so besieged by tourists that few locals live there. Wilhelm-Morden recalled a fact-finding trip she once took to Aspen where, as she put it, “it was three days before I even saw a child.”

All the efforts to lure locals back to Whistler likely won’t win back Kristine Thody, 43, who dismayed by the prices, has traded boarding for skate skiing at Cypress, where a season’s pass for the Nordic area was a steal at $129. She still misses Whistler Blackcomb. “The fact we live one hour and 45 minutes from a world-class resort is incredibly special. But for me to go to Whistler for a day, I might as well remortgage my house.”