Why are so many right whales dying in the Gulf of St. Lawrence? 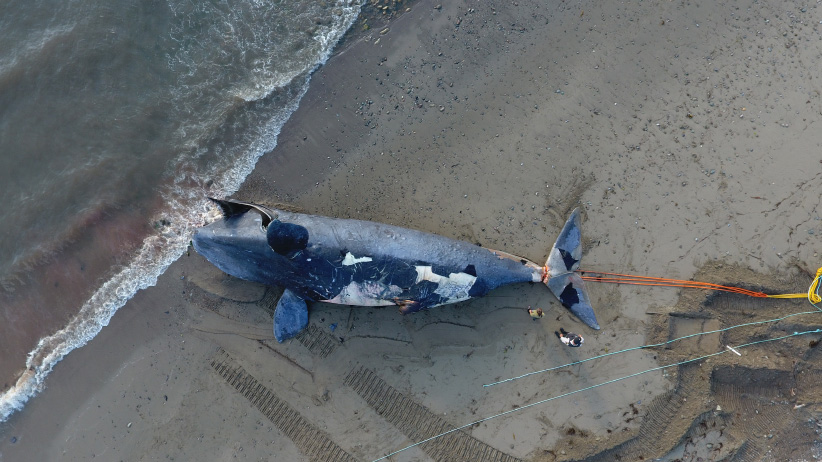 (Since this story was first published, at least one more right whale death has been confirmed, bringing the total to nine.)

His name was Peanut. He was the eighth North Atlantic right whale found dead in the Gulf of the St. Lawrence in as many weeks.

The 26-year-old father of one was pulled onto a New Brunswick beach last week so scientists and vets could carve through his thick skin and layers of blubber to try and determine his cause of death.

“It was not an easy feat,” said Tonya Wimmer, ‎a marine mammal biologist and consultant with the Marine Animal Response Society.

Despite what his name might suggest, Peanut was larger than a school bus. His baleen plates (the hair-covered bristles that filtered his food) were longer than Wimmer is tall.

READ: Outrage, but no surprise, as Japan returns to hunting whales

It took around 20 people, several ladders and a full-sized excavator to perform the necropsy.

This summer has been one of the deadliest years for the “species at risk” since the whaling days in the early 1900s. If the large mammals continue to die in the numbers they have this season, they won’t be around much longer. Three more have died already this year than were born. Experts estimate the population is currently around 500 worldwide. 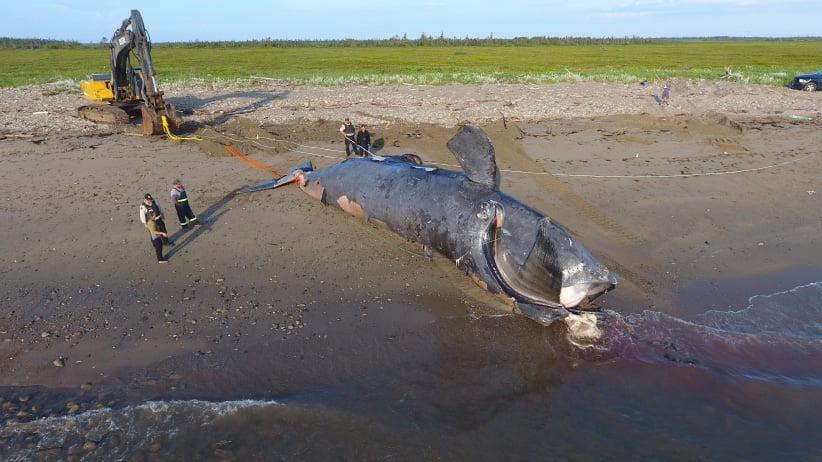 While the Gulf of the St. Lawrence isn’t a new location for the right whales, the number of sightings in the region has increased in recent years and scientists don’t yet have a solid understanding of how these giant mammals are using the area.

READ: ‘Have we met?’: Sperm whales can talk, and even have dialects

The preliminary results of Peanut’s necropsy have not yet been released. Another right whale washed up in a remote part of Newfoundland and Labrador this week, although scientists have yet to confirm whether it’s a new death or a dead whale they’d already counted, but couldn’t bring ashore.

“The animal is here to tell a story,” said Wimmer about Peanut. “Obviously something is out of balance.”

Amy Knowlton is a senior research scientist at the Anderson Cabot Center for Ocean Life in Maine. She’s been researching right whales since 1983. Peanut was one of the “well-known favourites” in the right whale research community, she said.

Right whales are easily identifiable. The callosities (rough, irregular skin patches) form unique patterns that act like fingerprints. Peanut, however, was known and named for the nut-shaped white scar on his head.

When you can identify the animal easily, you get attached to it, she said.

“It’s tragic on so many fronts,” she said, calling the deaths this year “unprecedented” and “heartbreaking”.

Why are the whales in the Gulf of the St. Lawrence dying?

Scientists can’t say precisely why the whales are showing up outside of their traditional habitats, but their best guess has to do with their food supply, according to Kimberly Davies, a post-doctoral fellow in the Oceanography department at Dalhousie University.

Despite high survey levels in their traditional feeding habitats—the Bay of Fundy, off the coast of Nova Scotia and the coast of Maine—the number of sightings in those areas has been decreasing since 2010, according to the consortium. Conversely, the number of sightings in the Gulf has been the highest in recent memory, according to Matthew Hardy, a division manager in the science branch at Fisheries and Oceans Canada. 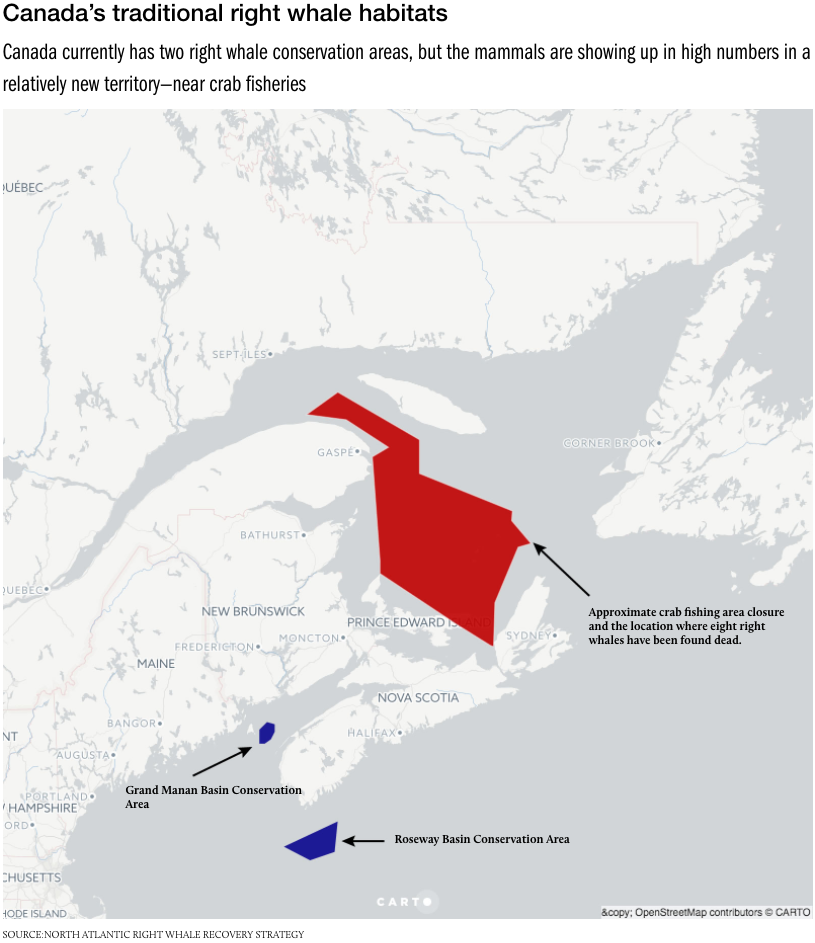 With less food in their traditional habitats, they’ve had to look around for other sources and, as some scientists speculate, they’ve found it in the Gulf of the St. Lawrence.

Peanut had been seen in many right whale habitats over the years—including the southeast U.S., Cape Cod Bay, Great South Channel, Bay of Fundy and Roseway Basin. But the last recorded sighting of him before he ended up on that beach in New Brunswick was in the Gulf last summer.

How did right whales become “at risk”?

The species was hunted to the brink of extinction in the whaling days of the 18th and 19th centuries. They were regarded at the “right” whale to hunt because of their high oil content and large baleen supply. They are also slow swimmers. They stick close to land and float after being killed, which made them easy targets. The whaling industry decimated the population so badly that commercial hunting became illegal in 1930, and the species was protected under the League of Nations, the forerunner to the United Nations.

How is the population doing now?

Since then the population has increased, but not enough to remove the ‘at risk’ designation.

READ: Killer whales in captivity: An idea whose time has passed?

While hunting may be illegal, humans are still one of the biggest threats to the mammal, according to a report by Fisheries and Oceans Canada. Between 1970 and January 2007, nearly half of all the documented deaths were caused by fishing net entanglements or collisions with vessels. 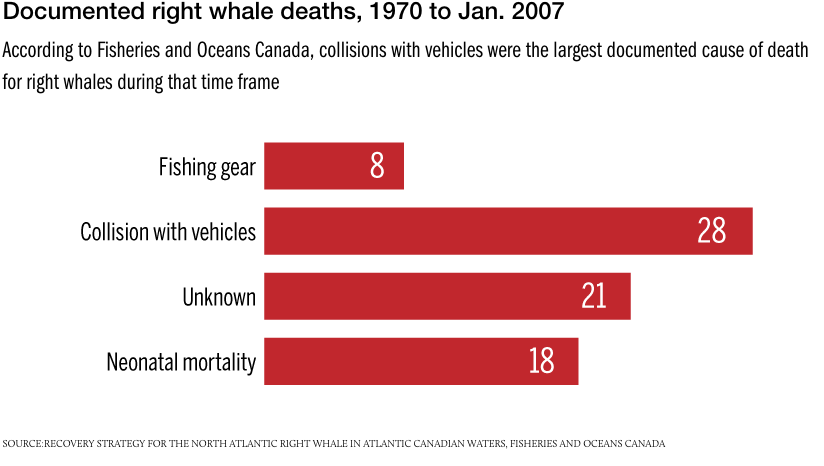 The report, however, notes that up to two-thirds of human-caused deaths are never discovered because not all carcasses are found and analyzed. Whales that die from entanglements, for example, and more likely to sink because of the poor health of the animal just before its death and therefore are uncounted.

Scientists in Maine are currently working with several fishing industries to make fishing gear more whale-friendly, whether that’s by changing the rope materials or not using ropes at all.

What else is being done to save right whales?

The Canadian Fisheries department closed snow crab fishing areas in the southern region of the Gulf a few days early after Peanut was found dead. The department also put boats in the water to remove traps left after the closures.

Detanglements, the process of freeing whales from nets, have been put on hold following the death of Joe Howlett, a New Brunswick lobster fisherman who died in early July after managing to free a right whale caught in fishing gear.

Notices have also been sent to any commercial fisheries in the Gulf about watching for whales and reporting sightings. The department has also asked ships to decrease speeds along shipping lanes in the area.

Other fisheries in the area haven’t opened their season yet and the department is in the process of figuring out how that will be handled, according to Hardy.

“Everything is on the table at this point,” he said.