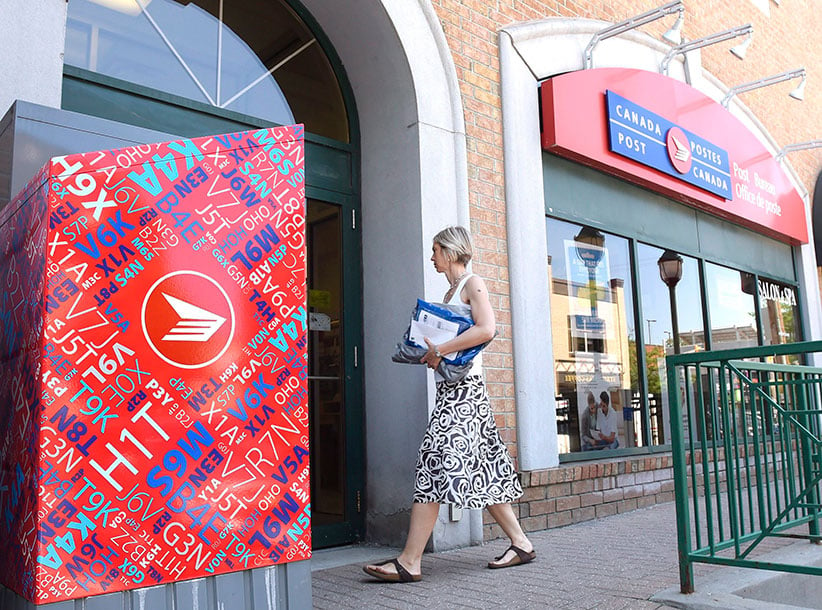 A customer arrives at a Canada Post post office as an ongoing labour dispute between the Canadian Union of Postal Workers and Canada Post continues, on Tuesday, July 5, 2016 in Ottawa. (Justin Tang/CP)

Here’s a not-so-special delivery: Canadians may be forced to prepare for a postal-service disruption as early as Friday. (Maclean’s subscribers, here is what you need to know about your magazine deliveries.) Early Tuesday, Canada Post served a 72-hour lockout notice to the Canadian Union of Postal Workers, halting negotiations between the two, and possibly sending postal workers across Canada to the picket line by the end of the week. CUPW and Canada Post have been working on a collective agreement since December, and this latest disruption has to do with the union wanting a pay increase for its rural, female carriers, and Canada Post saying it’s not affordable, especially while the corporation undergoes a government review of its operations—including door-to-door delivery.

Robert Campbell is the president and vice-chancellor of Mount Allison University. He’s authored two books on postal systems, and chaired the committee that reviewed Canada Post’s mandate back in 2008. He spoke to Maclean’s about what the future of postal service in Canada could look like, and how this current labour dispute fits into it.

Q: Can you put this current labour dispute in context with what’s been happening to Canada Post over the past decade or so?

A: I think Canada Post just simply wants this to end the uncertainty. Because it’s not in its business interest to have a long period of uncertainty, even if there’s no strike or lockout. I think the lockout business, and I’m guessing, is just a sign that Canada Post feels that it can’t afford uncertainty, which is almost as damaging as a strike.

The flip side of this is that I don’t, in my heart of hearts, think the union’s in a particularly strong position in terms of having public opinion or anyone else on their side in a labour dispute. How many strikes have you seen around these days? Times are tough, the unemployment rate’s not great, the growth prospect’s not great. I think people understand that the context of Canada Post is one in which it’s not quite a smokestack industry, but it’s a transformative sector in which everyone’s gotta change, for good or for bad, for right or for wrong. I don’t think there’s going to be a lot of sympathy for the union. That’s not to suggest they’re not arguing meritorious things—they have the right to bargain at the table and they have the right to look after their members. But I think that both sides are negotiating from positions of weakness: Canada Post in terms of its exposure in the market, and labour in terms of the fact I don’t think there will be a lot of public sympathy for their position if they went on strike.

Q: If a deal isn’t reached between the union and Canada Post, what does that mean for Canadians?

A: Well, that’s an odd thing. Because there will be an ambivalent, if not schizophrenic, response by Canadians. On the one hand, vast proportions of your readers have exited physical to the digital communications world. For a lot of people who are doing their banking, doing their financial services, their professional work, their communication with people, they’re using digital communications, this will be a bit of a tree falling in the forest. From the perspective of the Canada Post brand, it’s a bad idea to have a whole bunch of people wandering around saying, ‘See? There’s a strike on and nobody notices.’ So that’s the one hand.

On the other hand, there’s a different part of society, perhaps less urban, rural, small-town, small to medium-sized business that still rely on physical communication. It’s part of their lives. Maybe they haven’t exported over to digital yet because they don’t know how to do it, or it’s because it’s too expensive and there’s too much uncertainty. Or they may be in a line of work in which physical communication still makes a lot of sense, whether you’re selling stuff through catalogues or doing internet commerce, or fundraising, in which the physical thing is still more effective than the digital thing.

I think there will be an ambivalent response, and it will put the government in an awkward position if it dragged on, because typically there’s a kind of simple narrative around a strike that a government will then react to. But I’m not sure the narrative here will be so clear cut, one way or the other.

Q: You’ve been quite a strong advocate for Canada Post to remain a public service. What are the downsides of privatization?

A: The merits of the public format, at the moment, is that for Canadians it offers a from-anywhere-to-anywhere kind of approach, at a relatively uniform and accessible price. One just doesn’t know, if you unpack that model, what the service levels will be to outlying areas or small towns. One would not know what would go on with the price that people would have to pay and so on. It may very well be, when you look around the world, at this function being privatized or quasi-privatized, if you look at Holland, or England, or Belgium, these are all well-run postal services that have privatized and the sky has not fallen. But I think they were perhaps more ready; a lot of the questions were sorted out, and the organization of the firm was probably better placed to go the private route. The regulatory models had been experimented with. We don’t really have any sort of regulatory model, a third-party regulation model for post at the moment. We’d have to develop that. I think maybe one or two more stages yet and then maybe we’ll come back and have that discussion.

Q: What is it that needs to happen now to stabilize postal service in Canada, so that we’re not either in the midst of a strike, or the threat of a strike, every few years?

A: I think that would have been a fair comment talking about the ’60s, ’70s, early ’80s, but from say the mid-’90s to now, there hasn’t been a lot of postal disruptions. It’s been reasonably calm. The last thing under Harper lasted a couple of days, and there were a couple of contracts before that where there was a strike. So I would have characterized the labour situation a little bit differently than you have. If you look around the world, there’s been very little postal disruption, partially because, this is just my opinion, the union has been weakened in its ability to negotiate at the table. The market is changing so fast and there’s such shedding of business, it doesn’t really have a strong position in which to bargain. Most unions around the world have been able to sit down with management and try to see what their common interests are in going forward in terms of a changing market. I think of a labour dispute like this as a sign of weakness on the part of the union. I’m not saying that in a pejorative sense, but in a mechanical sense. I think that if they were able to make a case with Canada Post on their terms, they would have been able to do it at the table. So they’re obviously not seeing eye-to-eye on the longer-term health, the future of the postal sector. Whereas in other countries they seem to have been able to get to that point. I’m afraid it’s kind of a, ‘Is there a God?’ quality to what’s being discussed here right now, and I think that’s kind of a dopey debate to be having when you’re losing four, five per cent of your volumes every year.

Q: Where do you see the future of Canada Post headed?

A: I think Canadians have a want-your-cake-and-eat-it kind of approach to things, like we do for most things in life. Hell, I want a wild and crazy life and I want money in my bank. Canadians want a level of service that perhaps they don’t need and I think a lot of people have come to that place, but not enough. I think one of the discussions we have to have in Canada is to say, ‘Look, seriously folks, what do we actually want the post office to do? What are our real needs here? And what are we willing to pay for it?’ Because I think the parade’s gone by on universal daily service, one- or two-day delivery at a cheap price. That’s not going to happen anymore because there’s not enough volume to sustain that. So are we willing to give up home delivery? Are we willing to give up daily delivery? What are we willing to pay for this? That’s number one.

Number two. If you buy something from Amazon, or you buy something online, you’re very often are given a choice of how you want the delivery, right? If you want it for free, we’ll get it to you in seven to 10 days. If you want in three to five days, you pay x, and if you want it in one to two days, you pay y. I think that’s going to be the model. And now with digitization in which every address in the country is kind of unique, I think you’re going to see a lot more one-on-one relationships like that develop between the customer and the provider of the service. And the sellers on Internet commerce are going to want to accommodate that.